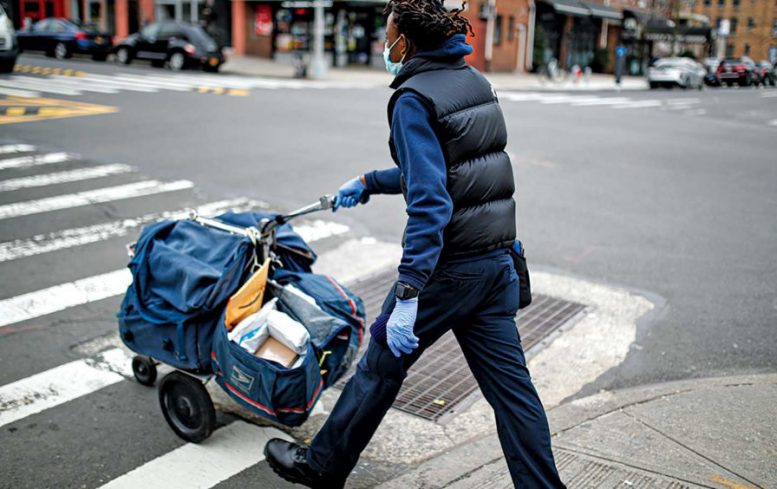 For starters, nationalize Amazon and the rest of the essential infrastructure of the digital age

Mike Davis, Nation Magazine: On March 23, Democratic House Committee Chairs Carolyn Maloney and Gerry Connolly called attention to an increasingly dire emergency. “Based on a number of briefings and warnings this week about a critical falloff in mail across the country, it has become clear that the Postal Service will not survive the summer without immediate help from Congress and the White House,” they said in a statement. The Democrats are pushing debt forgiveness and financial aid for this most vital part of our public infrastructure. But there’s an additional step that can be taken that doesn’t add to the deficit or compete with other priorities: an excess profits tax.

Since we are now in “wartime,” according to the White House, it’s important to recall some fiscal lessons from previous wars. One month before entering World War I, with the nation already mobilizing for the conflict, President Woodrow Wilson signed an excess profits tax designed to curb war profiteering and raise revenue from the rich. By 1918, corporations were being taxed from 30 to 80 percent of their estimated excess profits. Simultaneously, the maximum income tax rate was hiked to 77 percent, a 1,100 percent increase over the 1916 rate. The government took over the railroads for the duration of the war. At the end of the conflict, the railroad unions fought a heroic battle for their permanent nationalization. Meanwhile, the excess profits tax remained in effect until the inauguration of Warren Harding in 1921.

The tax, however, had been unevenly and loosely implemented, allowing banks and corporations, especially munitions makers, to disguise profits. In 1934 a special Senate committee headed by North Dakota’s Gerald Nye labeled them “merchants of death” and investigated their role in pushing the country into war. (The young Alger Hiss was one of the committee’s lawyers.)

That same year, the Vinson-Trammell Act mandated that shipbuilders and aircraft manufacturers selling to the Navy had to agree to limit their profits to 10 percent of the contract price. They were required to return any excess to the Treasury. This law was later extended to other categories of public contracting, and in the summer of 1940 a new excess profits tax granted broad powers to the Army and Navy, limiting profits by fixing fees to 7 percent of estimated costs.  Read more.