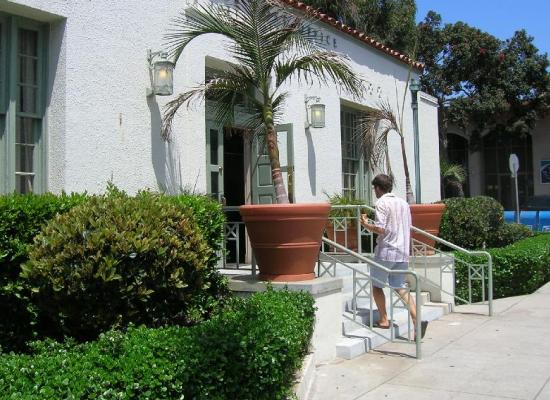 Despite a very well organized resistance effort that's been going on for over a year, the Postal Service has decided to go ahead with the sale of the historic post office on 1140 Wall Street in La Jolla, California.  The final decision to relocate retail services was posted today on the wall of the La Jolla post office.

In January, activists and preservations in La Jolla succeeded in getting the post office on the National Register of Historic Places.  That at least will prevent the building from being demolished or suffering significant alterations.  The designation does not stop the Postal Service from closing the post office and selling the building, however.

Congressman and La Jolla resident Scott Peters joined the fight, along Congresswoman Susan Davis, by introducing legislation called the Community Post Office Relocation Act.  The legislation would have given communities the right of first refusal to purchase post office buildings that are subject to closure. Things are moving very fast on the sale, though, and it doesn’t look like this legislation will be passed in time, if indeed if ever sees a vote in the Republican-dominated House.

The Save Our La Jolla Post Office Task Force is talking about having a community nonprofit purchase the building, and lease a portion of it back to the Postal Service to keep a post office in the same building.  But the Postal Service has made no promises about cooperating, and it may look for the highest price it can get from a private developer.

News of the Postal Service’s final decision to move ahead has disappointed everyone in La Jolla who’s been working hard to stop the sale.  Leslie Davis, chair of the Save the La Jolla Post Office Task Force, says that the lack of a legitimate process leaves communities like La Jolla “at an extraordinary disadvantage.”

The Postal Service has misleadingly used its $25 billion dollar losses over the past five years — which USPS spokespersons mention at every opportunity — as a “scare tactic meant to misinform the public to garner outrage and sympathy," says Davis.

The Postal Service’s efforts at “communication” with the public have been “just for show,” adds Davis.  “This is why people mistrust the system.  Giving us only 15 days to appeal is ridiculous as our forces are 100% volunteer.  It is an example of money having power and the people being silenced.  A private, billion-dollar corporation (CBRE, the Postal Service’s real estate broker) has all the power to initiate, consummate, and profit from the sale of a community cultural icon.”

The La Jolla post office was built by the New Deal in 1935.  It has a mural done by the artist Belle Baranceanu, which depicts the La Jolla Village landscape in a Cubist-like style.

(Photo credits: click on the link below the photo)