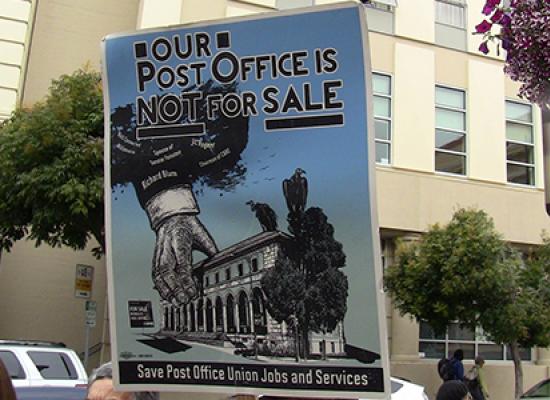 The East Bay Express is running an article today that's an slightly edited version of the first chapter of Peter Byrne's "Going Postal: The husband of US Senator Dianne Feinstein has been selling post offices to his friends, cheap."  Byrne's year-long investigation uncovered evidence of multiple conflicts of interest and problems with post office sales supervised by Blum's company, including:

• CBRE appears to have repeatedly violated its contractual duty to sell postal properties at or above fair market values.

• CBRE has sold valuable postal properties to developers at prices that appear to have been steeply discounted from fair market values, resulting in the loss of tens of millions of dollars in public revenue.

• In a series of apparently non-arm's-length transactions, CBRE negotiated the sale of postal properties all around the country to its own clients and business partners, including to one of its corporate owners, Goldman Sachs Group.

• CBRE has been paid commissions as high as 6 percent by the Postal Service for representing both the seller and the buyer in many of the negotiations, thereby raising serious questions as to whether CBRE was doing its best to obtain the highest price possible for the Postal Service.

• Senator Feinstein has lobbied the Postmaster General on behalf of a redevelopment project in which her husband's company was involved.