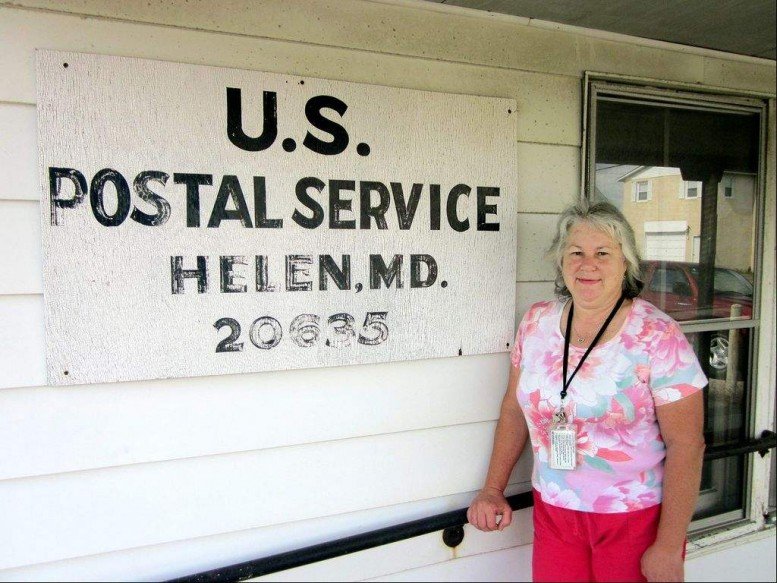 The Postal Service has assured the Postal Regulatory Commission on several occasions that it would not use lease problems or staffing issues to close POStPlan post offices by emergency suspension.  Yet even before the implementation of POStPlan has officially begun, that seems to be exactly what’s happening.

In Helen, Maryland, the post office is set to be reduced to two hours a day under POStPlan.  In June, the postmaster decided to take the retirement incentive, and her last day on the job was July 31.  The next day an article appeared in the South Maryland News saying that the Postal Service is declaring an emergency suspension and closing the post office on August 17th.  The Postal Service has also informed the landlord that it won’t be renewing the lease.

The Postal Service’s Discontinuance Handbook says the circumstances that may justify an emergency suspension include “lack of qualified personnel to operate the office” and “termination of a lease or rental agreement when suitable alternate quarters are not available in the community, especially when the termination is sudden or unexpected.”

The Postal Service is simply using the postmaster vacancy to terminate the lease and declare an emergency suspension of the Helen post office.  This, despite the fact that the Postal Service has explicitly reassured the PRC that it would not be doing anything such thing.

The lease issue and staffing problem have come up repeatedly in the POStPlan Advisory Opinion process.

When the Postal Service’s witness for POStPlan, Jeffrey Day, was cross-examined a few weeks ago, emergency suspensions over lease problems came up several times, and Mr. Day assured the Commission that POStPlan post offices were not heading toward a lot of suspensions.

In the Reply Brief filed just a few days ago with the PRC, the Postal Service addressed concerns about lease issues leading to emergency suspensions as follows: “While it is possible that a POStPlan Office may, at some point in the future, undergo a suspension because of lease negotiations, the Postal Service has no plan for using the lease negotiation process as a pretext to close Post Offices.”

The staffing issue is even more important because the Postal Service is looking at filling several thousand postmaster vacancies post offices over the coming months.  A couple of thousand positions probably became vacant on July 31.  Another two thousand will open up at the end of August and September.

Under questioning by PRC Chairman Ruth Goldway, Mr. Day testified that the Postal Service didn’t have a special plan for filling thousands of part-time positions because they have been “hiring this type of noncareer employee for years and years and years” (Transcript, p. 206).

Later in the hearing, Chairman Goldway was quite clear about what worried her: “I am still concerned about the ability to hire people who work just two hours a day and whether, as has happened with suspensions in the past, if you can’t find somebody we’ll wind up with a suspension” (Transcript, p. 299).

That concern was reiterated several times by the PRC’s Public Representative.  In his Initial Brief, the PR argued that “there is no basis for witness Day’s assertions that the Postal Service will be able to staff virtually all RMPOs. And an unstaffable Post Office is destined for closure, just as in Kirksey, KY.”

That was a reference to the case of Kirksey, Kentucky, where the post office was suspended in April 2012 after the Postmaster Relief running the office was assigned to a different location and the Postal Service said it couldn’t find anyone to fill the vacancy.  After an appeal to the PRC and an order from the Commission reminding the Postal Service of its obligation to either restore services or conduct a formal discontinuance process, the Postal Service said last month it would discontinue Kirksey and open a Village Post Office instead.

In his Reply Brief submitted last Friday, the Public Representative returned to the staffing theme.  Quoting from the comments submitted by Postmaster Mark Jamison (which you can read here), the Public Representative said this: “A postmaster who is retiring today has informed the Commission ‘that at this moment the Postal Service has no idea how it is going to staff several thousand post offices. In the last couple of weeks my managers have approached me and virtually begged me to accept a PMR position upon retirement.’”

The Public Representative suggested that the “exodus of qualified personnel” from the Postal Service will provide many occasions for emergency suspensions, as well as triggering discontinuance studies.

The Public Representative had noted three cases in the recent past where offices were closed because there wasn’t available personnel to run them.   The Postal Service dismissed the examples as “not record evidence,”  and proceeded to say that the notion that it will have difficulty staffing the POStPlan post offices is an “unproven assumption.”

“No record evidence supports such a conclusion,” said the Postal Service, “and witness Day stated unambiguously that he does not foresee a problem with staffing RMPOs and PTPOs” (Remotely Manage and Part Time Post Offices).

At a bend in the road

There’s been a post office in Helen, Maryland, for nearly 109 years.  The town is named after one of the daughters of its first postmaster, Joseph O. Hancock, who ran the post office out of his general store.

The post office is now located on the corner of a 90 degree bend in Point Lookout Road (Maryland Route 5) between Mechanicsville and Leonardtown.  They say that drunk drivers and others who’ve lost control of their car have run right into it.  It happened once, anyway.

The postmaster of Helen is Karen Guy Reynolds. Her mother and grandmother were also long-time postmasters in Helen.

Reynolds retired a couple of days ago, on July 31, after 17 years on the job — and after 73 years for the Reynolds family.  Along with some 4,000 other postmasters, she took the incentive offer being used to encourage postmasters to retire so that the Postal Service can replace them with lower paid, part-time workers.

Considering that the Postal Service has informed the landlord that it won’t be renewing the lease and the patrons are moving their boxes to another post office, it would appear that keeping a post office in Helen is not one of those options. 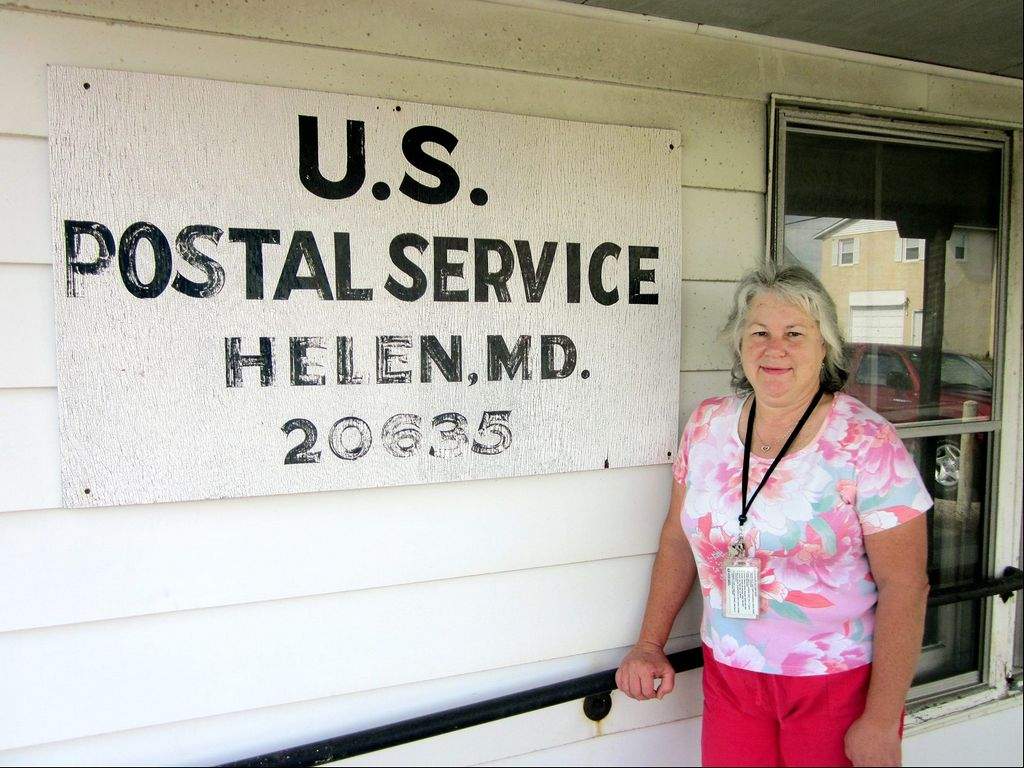 The Helen post office is a not a big operation.  It is a Level 53 open five and half hours a day, and it has 40 boxholders.  The Postal Service doesn’t provide figures on operating costs and revenues, but one can do some estimating.

Based on its earned retail hours (a number that the Postal Service has released), it looks like average annual revenues at Helen were in the neighborhood of $23,000 a year.  They were definitely below $27,000, because that was the cutoff for post offices included in last year’s closing plan, the Retail Access Optimization Initiative, of which Helen was one.

The annual rent is $1,200 a year.  The postmaster’s salary ($18/hour) was thirty-something thousand a year including benefits.  There was also a Postmaster Relief for Saturdays.  The total operating costs were probably around $35,000 a year.

Looked at simply as a retail outlet (a post office is obviously much more), the Helen post office was probably losing something in the neighborhood of twelve thousand a year.  Under POStPlan, Helen was going to be reduced to two hours a day and staffed by someone making $11.76 an hour with no benefits.  Depending on how much revenue the Postal Service lost in the process, that would probably have put Helen in the black.  It doesn’t look like it matters.  It’s easier for the Postal Service just to close the Helen post office.

There’s obviously an argument to be made for saving a few thousand dollars by closing post offices like the one in Helen, but there’s also a procedure for it.  Under Title 39 and the Postal Service’s own Discontinuance Handbook, numerous steps must be followed.  Those procedures are designed to protect small post offices from being closed capriciously or just because they’re running at a deficit.  But when the Postal Service declares an emergency suspension, it can close a post office without going through all those steps.

POStPlan has been presented to the country as an alternative to closing small rural post offices.  It’s supposed to be a more cost-efficient way of operating them.  Reducing the hours and replacing career postmasters with part-time workers will save money and put these post offices in a position where they basically break even.

POStPlan won’t officially be implemented until after the PRC issues its Advisory Opinion later this month, but the retirement incentive offer was the first step in the actual implementation, and thousands of postmasters are now leaving the service or transferring out of their POStPlan post offices.  That’s creating thousands of situations just like the one in Helen.

The Postal Service has promised the PRC that POStPlan would keep post offices open and not serve as a way to close them.  Given what’s already happening in Helen, the Postal Service is not getting off to a good start in keeping that promise.