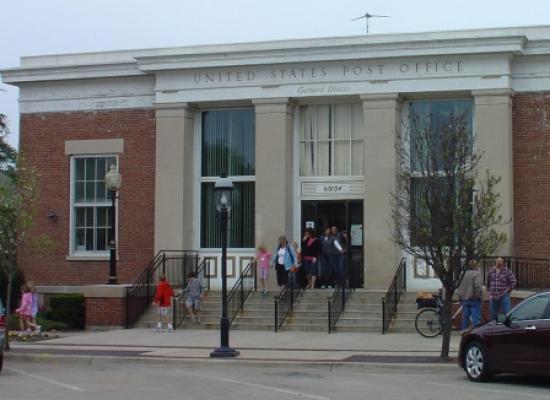 In 1843 women's rights advocate Margaret Fuller, on a road trip around the country,  stopped for a few days in  Geneva, Illinois, a new settlement on the western fringe of Chicago.  In her book Summer on the Lakes, she wrote that it reminded her of a New England village, and she discovered many New Englanders living there, "generous, intelligent, discreet, and seeking to win from life its true values."  She went to church and listened to a sermon, then spent a couple of days "passing some happy hours in the woods that fringe the stream, where the gentlemen found a rich booty of fish."

They must be proud of the fishing in Geneva.  When the federal government commissioned a mural for the post office in 1941, the painter, Manuel Bromberg, had to work out the subject matter with the people of the town.  The title of the mural is "Fish Fry in the Park."

The mural embellishes the Geneva post office, built by the New Deal in 1938.  Located within the Central Geneva Historic District , which contains 68 historic buildings (including Frank Lloyd Wright’s P. D. Hoyt House), the post office was a busy place for decades. But years ago, as part of a nation-wide strategy to abandon large downtown post offices, the Postal Service moved the mail carriers to an annex behind a MacDonald’s.

With only a retail business and a staff of three, the space is now considered “under-utilized,” so the Postal Service has been trying to sell the building.  It put it up for sale in 2009, but there weren’t many interested buyers, except for a local company, Fagans Graphic Design.  Company president Joe Stanton said he gave up on trying to buy the building because dealing with the federal government became a “nightmare.”

The property is currently valued at $1.2 million.  The real estate firm Jones Lang is handling the sale, reports the Geneva Patch.   “We think it’s an interesting property for redevelopment,” said the company’s senior VP Jeff Gittelman.  He imagines the building “as the home of several retailers or a new downtown restaurant.”

Postal worker Jim Cowell said, “It’s built to be a post office. Nothing else should be here.”

The fate of the mural has been of concern to Geneva’s citizens since they learned the building was for sale.  In January the mural was temporarily removed for restoration; it’s supposed to be remounted later this year.

“This restoration is a benefit to the community,” said USPS rep Robert Hart, in a USPS press release back in January.  “The Postal Service makes every effort to preserve and safeguard the art in our buildings for future generations.”  Unfortunately, when it comes to preserving and safeguarding the post office buildings themselves, the Postal Service has, well, other fish to fry.