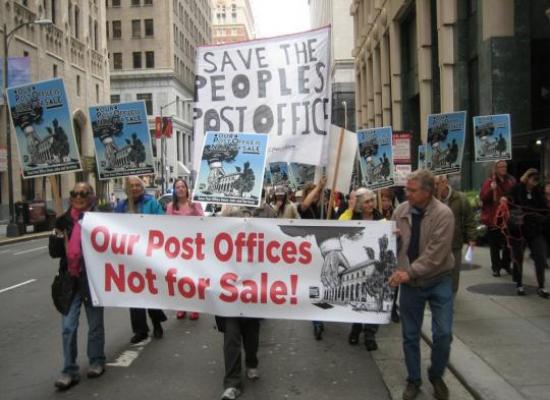 Fighting the Postal Service is always a David versus Goliath challenge, but citizens can’t stand by and watch their post offices being closed without putting up a fight.  The National Post Office Collaborate was created in the spring of 2013 in response to the proposed sale of the historic Berkeley Main Post Office.   The Collaborate quickly realized that since historic post offices were being sold off all across the country, the fight needed to take on a national perspective.

In addition to the Berkeley post office, the Collaborate has focused its energies on stopping the sale of the Bronx General Post Office and the post office in La Jolla, California.  These three buildings are on the National Historic Register of Historic Places, and they all contain priceless New Deal artwork.  There are many other historic post offices that are earmarked for sale, and the Collaborate has been reaching out to local citizens and activists opposing the sales as part of its effort to build a national coalition.

One of the main directions the fight has taken involves challenging the Postal Service for its failure to follow all the laws and regulations that govern post office closures, historic buildings, and federal properties.  The Collaborate argues that the Postal Service has not followed the procedures mandated by the National Environmental Protection Act (NEPA), National Historic Perseveration Act (NHPA), and various presidential orders.

Most troubling, the Postal Service has not taken sufficient measures to guarantee public access to the art work in most of these historic post offices.  This art is publicly owned and it is intrinsic to the buildings.  It was paid for with taxpayer dollars, it and should fall within the domain of the Public Trust.  It should not be transferred or removed from its environment and should always be accessible to the public as originally intended.

The Collaborate has filed appeals with the Postal Service asking it to reconsider its decisions to sell the Berkeley, La Jolla and Bronx post offices, but to no avail, and it appears that litigation is the only answer.   The Collaborate has retained the services of Harold (Hal) Hughes and Adam Ford, from the law firm of Ford & Huff.  Both have vast experience in dealing with the USPS.  Hal has handled a diverse range of civil and public interest litigation with the US Department of Justice and the US Postal Service, where he served as General Counsel.  Adam Ford is an experienced litigator and corporate attorney.

Ford & Huff have been doing research into the relevant laws and precedents; they wrote detailed letters to the Postal Service appealing the relocation decisions on Berkeley, La Jolla and the Bronx; they have been meeting with elected officials; and they have been working behind the scenes with community groups to help stop the sales.  Additionally, they filed a brief to stop the closure of the Berkeley office to the Postal Regulatory Commission (PRC) arguing that “relocations” where sites have not been identified are essentially “closures” and should fall under the purview of the PRC.

Joining in their litigation are local post office patrons and the National Trust for Historic Preservation.  The City of Berkeley is also coordinating their legal efforts with the Collaborate in an effort to stop the sale of their historic post office.  The Collaborate is hopeful that the court will eventually rule favorably on their causes of action and set precedence for stopping future post office building sales.

Litigation, however, is expensive, and increasing the visibility of the crime of selling Public Trust assets is a slow, hard climb.  But you can help.  Here’s how:

When it comes down to a fight, the National Post Office Collaborate will not back down.  They are intent on slaying the giant to ensure these historic post offices and the art within them remain in the public domain.

Jacquelyn McCormick is the Executive Director of the National Post Office Collaborate and a Berkeley neighborhood activist.