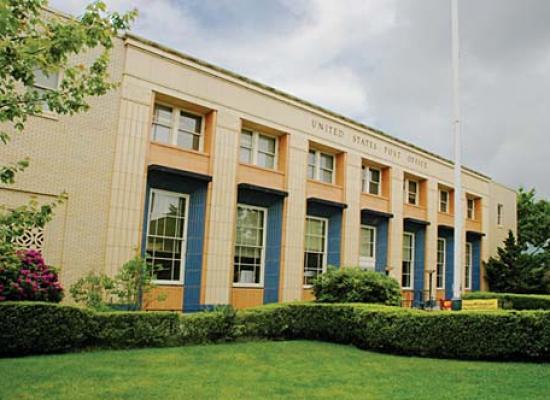 It’s the usual story.  The Postal Service owns a beautiful downtown post office that’s been a thriving hub for decades.  Then it moves most of the postal workers to another facility, a non-descript annex on the edge of town or in another city.  After a few years the Postal Service says, “the building is much bigger than we need,” and it goes up for sale.  When the citizens of the community learn that the post office is on the market, a Postal Service rep tells patrons, ““We want to maintain our retail presence in the area,” so perhaps we’ll be able to lease back some space in the building or in another nearby location.

Eugene Mayor Kitty Piercy wrote a letter to Eugene Postmaster Paul Bastinelli , saying the “signature post office is essential to the long-term growth and economic vitality of Eugene’s city center" and asking the Postal Service to discuss the fate of the post office with the community.  Ron Anderson, the Portland-based USPS customer relations coordinator, said that’s not how it works.  First the post office finds a buyer, then it notifies the community of the impending closure, and then it listens to what residents have to say.

The downtown post office was listed on the National Register of Historic Places in 1985.  It was designed by Gilbert Underwood, and it contains murals by Carl Morris, a friend of artists Mark Rothko and Robert Motherwell.  The murals depict the local industries of lumbering and agriculture.

If you’re an interested buyer, the post office is listed by Northland Realtors.  The asking price is $2.5 million.  Unless the city of Eugene can find a way to take over the building for public purposes, it will probably turn into a restaurant or offices for a private company.  That would be too bad.  As career postal employee Gary Jarvis told KVAL.com, moving out such a unique building will lower the postal service's standing in the community.  "That's the face of the post office the community has come to know," he said.