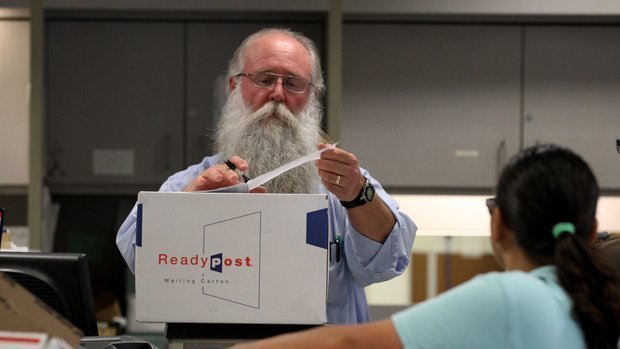 The Postal Service is in the process of closing two post offices in San Diego, and it’s using the fact that the leases have expired as one of the rationales.  Considering that about three out of four post offices in the country are in leased spaces, that explanation puts thousands of post offices at risk every year.

The Postal Service says the two locations were chosen in part because they are in retail centers where their leases have expired.  The Mission Valley lease expired April 1 and the Escondido lease ended June 1.  The Postal Service says both sites will remain open until a decision is made, but you can guess how that’s going to turn out.

The federal regulations governing post office closures (39 CFR 241.3) list the “permissible circumstances” for initiating a discontinuance study, such as a postmaster vacancy and “insufficient customer demand.”  An expiring lease is not one of them.

If the Postal Service and landlord cannot agree on a lease renewal, the office may be suspended, and the suspension can be cause for initiating a discontinuance, but an expiring lease is not cause for a suspension, and it’s dubious whether it is an appropriate cause for initiating a discontinuance study.  In any case, there’s no indication that the Postal Service was unable to renew the leases at these two locations, and the offices have not been suspended.

The federal regulations do say that the “permissible circumstances” are not limited to those listed, so maybe the Postal Service thinks it’s fine to add expiring leases to the list.  That would means, though, that any one of the 24,000 post offices in leased spaces could be studied for closure simply because the lease expired.

The post office has been at the Escondido location since 1993, when it contributed $420,000 to the original construction costs.  There’s been an office in the Mission Valley mall since 1997.

Closing the two offices could yield significant savings in lease costs. According to the USPS facilities list, the annual rent is about $216,00 at Mission Valley, and $270,000 at Escondido.  (That may seem like a lot, but it’s about $32-$35/SF, which is comparable to other post offices leased by the Postal Service in the area.  It’s pretty upscale.)

Of course, closing post offices also means driving away customers and losing revenue.  The Postal Service hasn’t released information about the annual revenues at these post offices, but they are likely to be significant, and the potential losses, just as significant.

According to U-T San Diego, customers are already expressing their unhappiness over the proposed closures.

“This is super convenient because I work at the mall, so I don’t have to go out of my way to a post office that’s really far,” Tiffany Perez said just outside the Mission Valley office. “It’s crazy that they’re going to close it.”  Perez said she typically uses the office three days a week to mail letters and packages to her boyfriend in Pennsylvania and her father in Phoenix.

Lisa Breshears called the move shortsighted because many people use the mall post office to mail gifts they buy at nearby stores.  “At Christmastime, this thing’s a little moneymaker,” she said.

It looks like that little moneymaker won’t be making money for the Postal Service next Christmas.