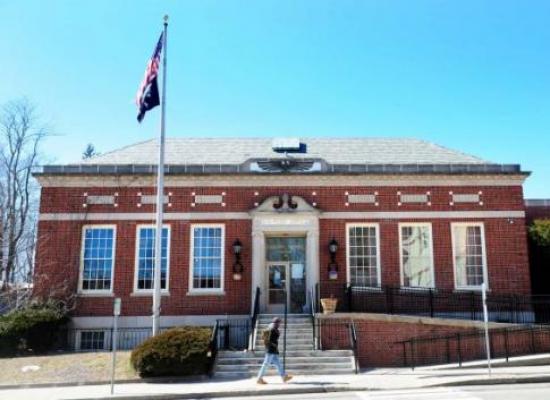 On Monday, the Postal Service announced that “it is considering plans” to sell the historic post office in Derby, Connecticut.  Such a sale requires a formal review process, and the Postal Service has taken the first steps in that process by informing city officials and the public of its plans.

The process involves a fairly complicated legal procedure, and it will take some time, at least a couple of months, before a final decision is made and the building is actually put up for sale.  That’s why it comes as something of a surprise to see the Derby post office already listed on the "USPS Properties for Sale" website.

A done deal from the get-go

The USPS press release about the sale says that the Postal Service plans to relocate the letter carriers to another facility, rendering the 12,000 square feet in the post office unnecessary.  It will then either rent space back in the building from the new owner or look for another location.  (Even though the new post office may be in the same building, the Postal Service says in a letter to the city that it will offer the community “an upgraded, modern facility that will provide the level expected by our customers.”)

The press release also says that postal officials have already met with the mayor of Derby, Anthony Staffieri.  It looks as though the mayor has already given his approval.  Staffieri is quoted as saying, “This underutilized building can be sold for retail/commercial space and add to our tax base downtown.”

There’s nothing in the press release about the fact that the Derby post office was built in 1932 and that it is eligible for the National Register of Historic Places (NRHP).

Before selling an historic property like this, the Postal Service is required to go through a review-and-consultation process, as described in Section 106 of the National Historic Preservation Act (NHPA).

But the Postal Service and its exclusive real estate partner, CBRE, are not wasting any time.  The Derby post office is already listed for sale — and has been for at least a few weeks  — on the USPS-CBRE Properties for Sale website.  It’s described as “coming soon,” “list price to be determined,” and “Historic property, eligible for NRHP.”

It would seem that the decision to sell the Derby post office is a done deal. The only problem is that it may be against the law.

Section 106 of the NHPA requires Federal agencies to conduct a review process that takes into account the effects of their undertakings on historic properties.  As part of that process, the Advisory Council on Historic Preservation (ACHP) must be given “a reasonable opportunity to comment on the proposed undertaking.” 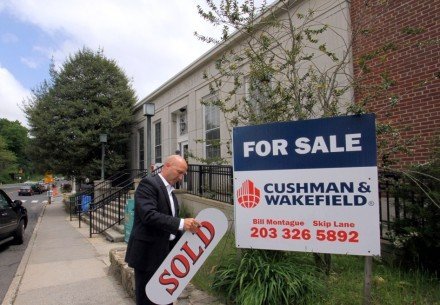 In addition, the Postal Service is required to consult with the State Historic Preservation Officer (SHPO) and to give the public an opportunity to comment on the proposed sale and its potential impacts on the community.

Needless to say, one would think that this consultation process with the ACHP, the SHPO, and the public would take place before a decision is made to sell the post office.

But the Postal Service, believe it or not, takes the position that it can do the Section 106 review after it has made a decision to sell the property.

In a presentation that it gave on February 26 to citizens of Berkeley, where the historic post office is under review for sale, the Postal Service described its process for relocating retail services and disposing of an historic post office.  The steps for a relocation are outlined in 39 CFR 241.4: Send a letter to city officials and meet with them; hold a public meeting and comment period; make a recommendation and give the community 15 days to appeal; render a final decision; conduct an appraisal.

Only at that point does the Postal Service initiate a Section 106 review.  It is hard to see how such a review can be conducted in good faith if the decision to go ahead with the sale has already been made.  What possible purpose can there be to a review conducted after the fact?

The case of Derby is even more problematic.  The Postal Service isn't simply postponing a Section 106 review until after it makes a final decision about whether or not to sell the post office.  By listing the post office on the CBRE website, the Postal Service has revealed that it has already made a decision to sell the post office — before giving the public any opportunity to comment and appeal.  That would seem to be a violation not only of Section 106 requirements regarding disposal of an historic property but also the statutory requirements regarding a relocation as described in 39 CFR 241.4.

Violating the spirit and intent of the law

Last September, attorneys for the National Trust for Historic Preservation sent a letter to the Postal Service about the proposed sale of the Berkeley post office.  They focused precisely on the issue of when a Section 106 review should be conducted.

“We are particularly alarmed,” said the Trust, “by the recently stated intention of the U.S. Postal Service to make a formal decision on whether to relocate the Berkeley Post Office pursuant to its internal regulatory process prior to initiating consultation under Section 106 of the National Historic Preservation Act of 1966 (NHPA).”

Making a decision to sell prior to consultation, said the National Trust attorneys, “would be wholly inconsistent with the spirit and intent of the NHPA.” 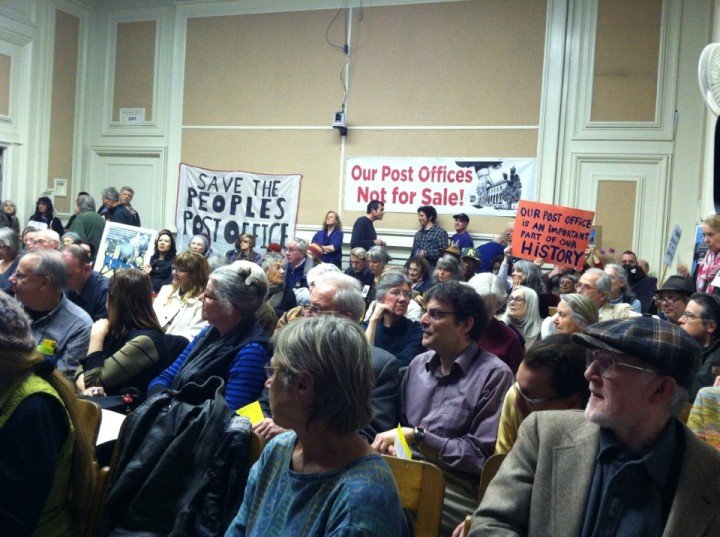 In the public meeting held in Berkeley last week, an attorney submitted a statement pointing to the Postal Service’s failure to abide by the NHPA, as well as the National Environmental Quality Act, in Berkeley and elsewhere.  There's talk that legal action might be down the road if the Postal Service does not do so.

Indeed, the Postal Service is already in court over the sale of an historic post office, and one of the legal issues is whether or not  Section 106 requirements were followed.  The citizens in Venice, California, have filed a lawsuit against the Postal Regulatory Commission for its decision to dismiss the appeal of the closure of their post office.  In the brief filed on behalf of Venice by attorney Elaine Mittleman, one of the complaints is that the Postal Service failed to comply with Section 106 when it made plans for the future of the post office's New Deal mural.

While Venice, Berkeley, and other communities are pushing back against the Postal Service’s decision to sell their historic post office, it doesn’t look like Derby will be putting up much of a fight.  With the mayor of the city already on board for the sale and the property already listed on the CBRE website, the writing is on the wall.

But the battle over the future of the country’s historic post office buildings is just beginning.  The Postal Service is turning the Section 106 review process into a sham, and the whole thing is a shame.

(Photo credit: Derby post office; post office sold in Westport, CT; Feb. 26 meeting on the Berkeley PO.  And a thank you to the Valley Independent for posting the USPS press release and letter to the mayor.)