The Postal Service has closed the post office in Lindsborg, Kansas, because of concerns about the air quality.  Apparently some black mold was discovered in the basement.  That’s not too surprising considering that it’s an old building that dates back to 1936.

The news reports don’t mention the phrase, but presumably the office was closed for an “emergency suspension.”  Under the legal provisions for such suspensions, the Postal Service can close an office on very short notice, without consulting the community.

And that’s just what happened in Lindsborg.  Customers arrived at the post office one day last week and found the place closed.  There was just a cryptic message posted on the door explaining that due to "safety concerns" postal operations had been transferred to Salina, over 20 miles away.  At least one customer complained about the lack of advance notice and asked why the Postal Service "didn't know about this way before."

There are three other post offices less than ten miles from Lindsborg where customers can do their postal business.  The more immediate concern was the hundred or so box holders in Lindsborg.  In order to provide boxes to these customers, the Postal Service is going to install a cluster box unit in front of the post office.

There’s nothing very unusual about the Postal Service closing a post office over mold issues.  It’s happened several times in the past, and usually the office reopens after the landlord takes care of the problem.

And that’s pretty much what one would expect in this case.  The notice taped the door of the Lindsborg post office says just that:

What’s curious about this notice is that the landlord is the Postal Service itself.

According to the most recent Owned Facilities Report, which was just updated a couple of months ago, the Postal Service owns the post office at 125 E. Lincoln Street in Lindsborg, Kansas.  In fact, it has owned the building since it was constructed back in 1936. 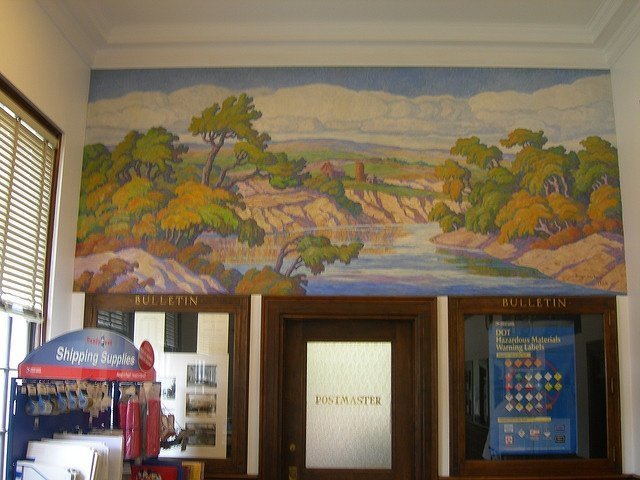 It’s not as if this is just any post office.  It's a historic New Deal post office, it contains a 1938 mural entitled "Smoky River" by Birger Sandzen, and it’s on the National Register of Historic Places.  (The 1989 nomination form is here, with the photos here.)

Now, it’s possible that the notice taped to the door of the post office was just boilerplate, and someone in postal management mistakenly used some text that was intended for when a leased property is suspended.  But that wouldn’t explain why the Postal Service did not inform the news media that it would be taking care of the mold problem itself as soon as possible.

The fact that the Postal Service is going to spend money installing a cluster box unit in front of the post office suggests that the closure will be more than temporary.  It's entirely possible that the Lindsborg Post Office will never reopen and that the Postal Service will eventually put the building on the market.  Perhaps that's the plan behind the mold issue.