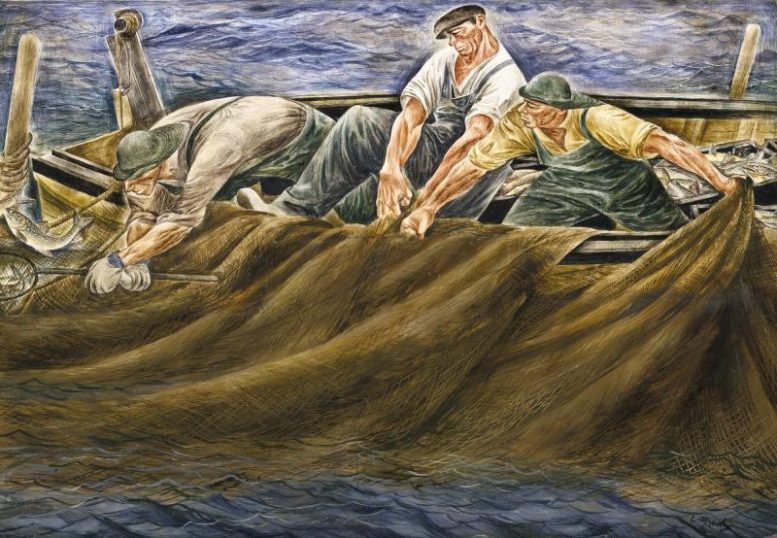 News-Herald: Gregory Wittkopp, director of the Cranbrook Center for Collections and Research, will give a presentation on the Depression-era Lincoln Park Post office mural, on Wednesday, Nov. 13, at the Lincoln Park Historical Museum, 1335 Southfield Road.

The mural entitled, “Hauling in the Net,” was created in 1939-1940 by acclaimed Michigan artist Zoltan Sepeshy in his studio at the Cranbrook Academy of Art. Sepeshy was an instructor at the academy beginning in 1936. He later served as departmental director at Cranbrook and as its second President, retiring in 1966. He died in 1974 at age 76. The finished tempera mural, measuring 5 feet by nearly 14 feet, was installed on the west wall of the post office lobby, above the entrance to the postmaster’s office.

The U.S. Treasury Department post offices, built across the country during the Great Depression, featured over 1,300 murals in total, all created out of the Treasury Department’s Section of Fine Arts, a New Deal program designed to employ American artists in creating murals for these federal buildings.

In 1967, “Hauling in the Net” was inexplicably removed from the Lincoln Park Post Office. It was, however, saved from possible destruction and removed to the Marine Museum on Beaver Island for its ultimate preservation by the Beaver Island Historical Society. There it has been on display for 52 years.  Read more.