On Tuesday of this week, Vice President Biden told a largely African American audience in Danville, Virginia, that Mitt Romney wanted to put them "back in chains" by "unchaining Wall Street."  Republicans jumped on the VP for playing the race card, Romney called the remark "reckless," and the story was all over the national news.

The news item says the Postal Service says the hours are being reduced “in an attempt to keep from closing down the branch.”  A letter displayed on the post office door says the reduction in hours is due to “recent economic changes within the postal service.”

There’s nothing very unusual about reducing hours at a post office.  According to a 2004 GAO report, the Postal Service has “adjusted hours at existing post offices from time to time to reflect customer demand.”  The Postal Service told the GAO that “postmasters are responsible for establishing window service hours based on the needs of the community within the funding resources.  Officials noted that they periodically assess the number of transactions and customer visits throughout the day to determine the appropriate hours, and that hours may be extended or shortened in response to customer demand.”

The Postal Service wouldn’t tell the GAO how many post offices had had their hours cut, but over the years, it has happened to a significant number of offices.  There are about 1,500 post offices on the POStPlan list that currently operate at part-time hours, and most if not all of them once operated full-time.  But unlike the post office in downtown Danville, nearly all of the 13,000 POStPlan offices are small rural post offices.

Section 126.4 of the Postal Operations Manual (POM) reads as follows:

“Postmasters provide all retail services for 8 1/2 or more hours on nonholiday weekdays, unless otherwise authorized by the district manager, Customer Service and Sales.  Retail service hours are scheduled to meet the needs of local postal customers.  When the postmaster determines that additional service hours are necessary to meet community needs, employee work schedules are adjusted to provide such service.  Postmasters must obtain approval of the next higher management level for increasing workhour usage if additional costs are involved.”

The POM doesn’t say anything about reducing hours at a post office because of “funding resources” or to save money “in an attempt to keep from closing down the branch.”  The POM is more about expanding hours or adjusting them to fill the needs of the local community.

The Main Street post office is in the middle of downtown Danville, so according to the POM, its hours are supposed to be aligned with “the hours kept by that business community.”  As you might imagine, there aren’t many businesses or anything else in downtown Danville open 11 to 3.

The Courthouse post office is located in a building, owned by the Postal Service, that also houses the US District Court, open 8:30 to 4:30, and the US Marshal’s Office, open 8:30 to 5:00.

There are dozens of other businesses, offices, stores, and government agencies within a few blocks of the post office.  To name just a few:

Given their hours of operation, it’s very likely that many of these places will be seriously inconvenienced by the post office’s new hours.  If anyone needs to get to the post office in the morning or late afternoon, they’ll need to drive out to the main post office, 3.5 miles away.

The Courthouse post office was once the main post office of Danville.  From the looks of things, back in 2000, the Postal Service opened a large office, perhaps originally a carrier annex, on the outskirts of town (on Teal Court), and at some point, that facility was made the town’s main post office and the Main Street office was demoted to a station.

It’s somewhat surprising that the Postal Service would consider downtown Danville unworthy of a full-time post office.  The city has a population of over 43,000, and it’s in the process of implementing a big development plan to revitalize the downtown area.  It's a 25-acre historic district that's been the commercial and administrative heart of the city since the 1790s, and it has numerous architecturally significant structures that go back to the late 19th and early 20th century.  The Courthouse post office is one of these historic buildings, constructed in 1934 by the New Deal.

The news article about the reduced hours at the post office doesn’t say anything about it, but the post office may soon be going on the market.  The Postal Service listed the building last year on LoopNet, but for some reason took it off market.   It is not listed as currently for sale on the CBRE-USPS website, but the website does not include many post offices known to be for sale.

Cutting the hours of operation is not a good omen.  Odds are the historic Danville post office will be sold, and retail services “relocated” to a small storefront elsewhere downtown.  Or perhaps the Postal Service will just say it's moving services to the Teal Court post office.  That’s been the pattern with dozens of other downtown post offices.  Danville may soon be joining the list. 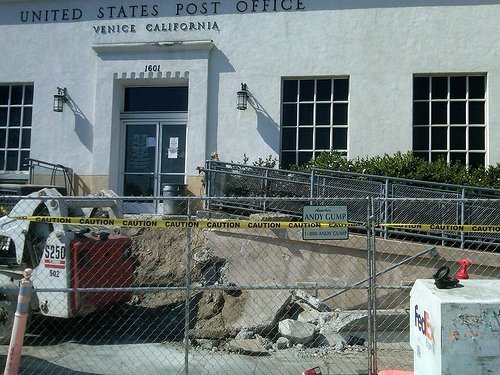 There's also news this morning that the historic post office in Cheraw, South Carolina, is going back on the market.  The Postal Service plans to move retail services to the carrier annex.

And one final update: The historic post office in Venice, California, was finally transferred to private hands on July 27, after a sixteen-month fight by the community.  It's going to be turned into the office of film producer Joel Silver (Mad Max, Die Hard).  They've already started gutting the interior and doing demolition work on the entranceway and handicap ramp, but there are questions about whether the new owner actually has title and proper permits.