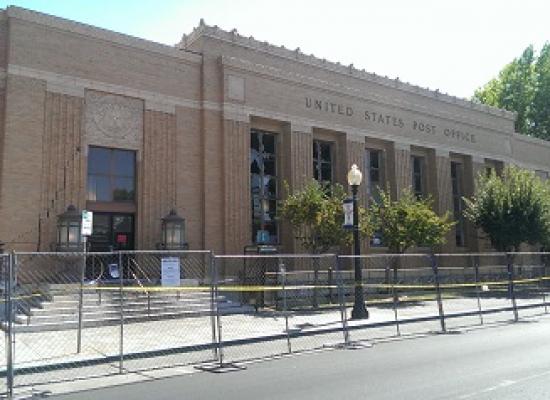 The Postal Service has officially listed Napa’s earthquake-damaged downtown post office building for sale on the USPS-CBRE Properties for Sale website.  An asking price was not provided, so it will be up to bidders to make their best offers for the historic property.

The post office, which was built in 1933 in the Art Deco style, was badly damaged in the August 2014 earthquake and has remain closed since then.  In early July, the USPS proposed demolishing the structure, saying that it would cost $8 million to repair quake damage, while it would only cost $500,000 for demolition. After public outcry, the federal agency reversed course and said it would sell the building to a buyer who can repair the structure and preserve its architectural integrity.  The property “represents an exceptional opportunity to acquire a historically significant building in Napa’s thriving downtown,” says the marketing brochure. Read more.