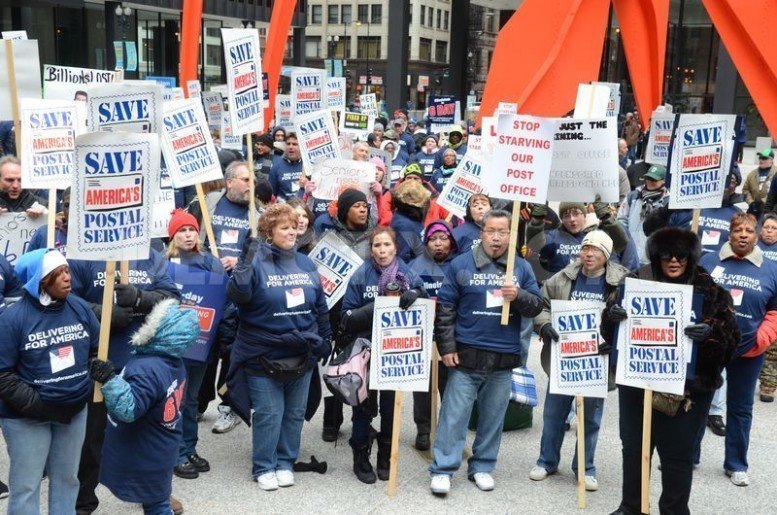 “Rather than pass legislation which dismantles the Postal Service, Congress must be a partner in building a postal business model for the 21ST Century,” said Connolly.  “By allowing the Postal Service to innovate and relieving the retirement prefunding obligation imposed by Congress in 2006 we can protect the infrastructure of a $1 trillion mailing industry while maintaining universal service for all Americans—rural, suburban, and urban.”

Connolly and Young’s letter suggests alternatives to legislative proposals that cut mail delivery from six days to five, eliminate 3,600 or more rural post offices, end next day mail service, and stop 90% of door-to-door mail delivery.  The letter highlights the devastating effects H.R. 2309 would have on the Postal Service, including lost revenue and cuts in service.  Connolly and Young suggest there are alternatives, such as restructuring the $5.5 billion annual Retirement Health Benefit prefunding requirement, refunding USPS overpayments into FERS, and permitting USPS to adopt new business practices that would allow USPS to forgo these drastic cuts in service.  In contrast to HR 2309, bipartisan Senate legislation reschedules retirement health benefits payments to protect USPS solvency and allows the Postal Service to innovate and earn new revenue.

Connolly and Young look forward to working with congressional leaders to build a Postal Service business model  for the future which closes the current gap in funding while continuing robust mail service to all areas of the nation.

Text of the letter is below and a signed PDF version is attached.

We are writing with respect to recent efforts to address the budget crisis facing the United States Postal Service (USPS).  Considering the Postal Service’s Constitutional mandate to provide reliable mail service and delivery to all areas of the country, we ask that you work with us to ensure any postal reform legislation develops a business model which will allow the Postal Service to maintain robust service in the 21st century.

House and Senate committees as well as USPS management have considered different postal restructuring proposals.  Some have called for eliminating 3,600 or more rural post offices, eliminating six day mail service, ending next day mail service, and stopping 90% of door-to-door mail delivery.  We recognize the need for USPS to restructure its business model, but believe that we must not be rushed into false choices which could accelerate the decline of the Postal Service, with negative impacts both for our constituents and the trillion dollar private sector mailing industry which depends on the Postal Service.

For example, closing thousands of rural post offices would save less than 1% of the Postal Service’s annual operating budget, and would not have a significant impact in closing the Postal Service’s approximately $9 billion budget deficit.  However, closing rural post offices would have a devastating impact on communities where the post office is the center of a community and a primary means of communication.  By comparison, restructuring the $5.5 billion annual Retirement Health Benefit (RHB) prefunding requirement, imposed by Congress in 2006, would save far more money without any negative impact on mail service or the solvency of USPS pensions.  That 2006 law required that the USPS prefund 100% of anticipated retirement and retirement health costs, a requirement that no other public or private entity in America faces.  By comparison, many AAA rated localities and states prefund retirement up to 80%.

We also have practical alternatives to reducing mail service from six to five days.  The Postal Regulatory Commission found that USPS exaggerated savings and underestimated revenue losses which would result from a reduction in mail service to five days or fewer.  However, even if we were to accept the generous cost savings estimate presented by USPS, it saves three times less money than refunding money that USPS employees and customers overpaid into FERS.  Since USPS has overpaid some $10 billion into FERS—its own money, not money paid by taxpayers—simply refunding that overpayment would have a much larger impact on USPS’s balance sheet without the negative impacts to service associated with reducing mail service from six to five days.  This is an important choice for us to make because six day mail service is a competitive advantage for the Postal Service, and because six day mail service ensures that pharmaceuticals and other important communications and products can be shipped to our constituents in a timely manner.

Ending next day mail service and stopping 90% of door-to-door mail delivery, most of which occurs in small towns and older communities, also would degrade service.  The USPS earns three times less revenue from non-postal sources than comparable postal services in Europe, due to a provision of the 2006 postal restructuring bill which precludes many sources of USPS revenue.  Rather than tying the hands of USPS Congress should let it operate like a business, in partnershipand not competition with other businesses.  It would be difficult to determine how much revenue could be generated, but we do know outdated restrictions impede innovation and should be removed.

By considering reforms which save money without damaging service cuts, particularly for rural areas, we can maintain fidelity to the Postal Service’s Constitutional mandate, create opportunities for business growth, and perhaps obviate the need to lay off hundreds of thousands of our neighbors who work for the Postal Service.  We appreciate the opportunity to comment on such an important matter, and share the commitment to developing a new Postal Service business model which closes the current gap in funding while continuing robust mail service to all areas of our nation.