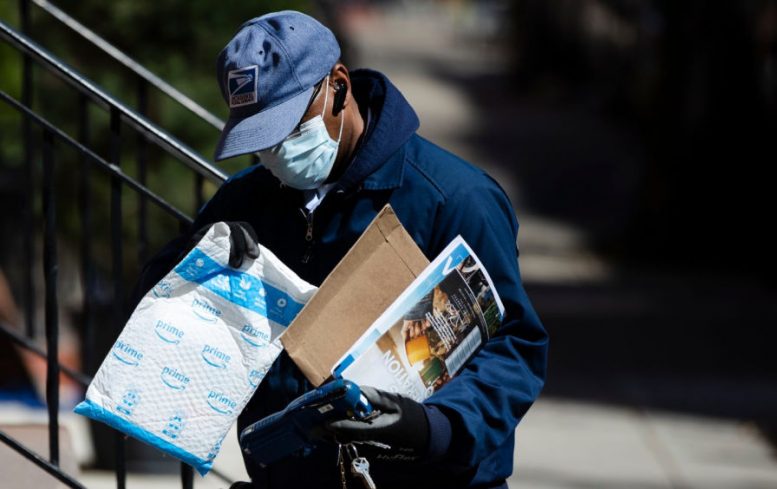 If our leaders don’t act, soon you may not be able to mail a letter at all.

By Katrina vanden Heuvel, editor of The Nation

Washington Post: This month, the US Postal Service sounded the alarm: Mail revenue could drop by more than 50 percent this year as a result of the novel coronavirus crisis. Without a large federal cash infusion, the USPS may not survive the summer.

On Capitol Hill, leaders on both sides of the aisle supported a postal relief package, but President Trump and Treasury Secretary Steven Mnuchin intervened to keep it out of the final $2.3 trillion stimulus deal. Instead, the Postal Service received an offer of $10 billion in additional debt if they agreed to draconian conditions. According to the Post, Trump and Mnuchin are using the crisis as leverage to ram through long-sought hikes in package delivery rates and cuts to labor costs.

Lawmakers must stand up to the White House and deliver the relief the Postal Service needs—not only to survive abut also to thrive.

The USPS is the quintessential American institution. In fact, it predates the nation by one year: In 1775, Benjamin Franklin was appointed the first postmaster general. After nearly 250 years, it is the most trusted brand in the county, according to a study by Morning Consult. That’s unsurprising, perhaps, as “neither snow nor rain nor heat nor gloom of night” prevent postal workers from doing their jobs.

As Americans across the country are following stay-at-home directives, they are relying on the USPS to deliver their prescription drugs, food and other essentials. Tax refunds and stimulus checks arrive through the mail. So do absentee ballots — this year’s presidential election may indeed depend on the Postal Service to facilitate voting by mail. As civil rights leaders caution against efforts that would require voters to pay for postage when mailing in ballots, the USPS has restated its previous policy to deliver every ballot, even those with insufficient postage. Can you imagine UPS or FedEx doing the same?

According to a new report from the Institute for Policy Studies, rural areas, often heavily Republican, would be particularly hard hit if the Postal Service goes bust. No other service has the capacity to deliver to every address in America, no matter how remote. And in 15 states with the largest rural populations, the USPS directly employs more than 75,000 people. Maine’s 3,356 postal workers, for example, exceed the number of the state’s electricians, fast-food cooks, construction workers, child-care workers and truckers.

Last year, when the main threat to the USPS was privatization, Danny Glover wrote that a diminished Postal Service “would be devastating for customers and employees of all races — but especially African Americans.” Glover, an actor and the son of two postal workers, explained that black employees make up 28.6 percent of the postal workforce and concluded, “We must protect the Postal Service — and support new innovation to meet 21st century needs.”

Today, that innovation is within reach. Sen. Sherrod Brown (D-Ohio) and Rep. Rashida Tlaib (D-Mich.) have proposed free Federal Reserve accounts, accessible through local post offices, that would give individual Americans the same higher-than-normal interest rates that big banks enjoy. This builds on postal banking proposals that Sen. Bernie Sanders (I-Vt.), Rep. Alexandria Ocasio-Cortez (D-N.Y.) and others have put forward that could generate as much as $1.1 billion in annual revenue.

Another revenue idea, given that Trump has called himself a “wartime president,” would be to enact an excess profits tax. After President Woodrow Wilson went this route during World War I, corporations were taxed up to 80 percent on their excess profits. A similar effort today would yield enough to fund the USPS without adding to the deficit. Recently in the Nation, Mike Davis wrote, “Today’s progressive Democrats should be at least as bold as Wilson, Roosevelt, and Harry Truman and draft a new excess profits tax bill in the House.”

There are other ways the Postal Service could innovate to meet the needs of today and the expectations of tomorrow. Other countries have postal workers check in on the elderly, making it easier for seniors to remain in their own home. Postal trucks could also be equipped with monitors to gather data on everything from potholes to pollution.

Bold ideas like these could continue the Postal Service’s 250-year history of transforming itself. The USPS has adapted with the advent of steamboats, railroads and planes. Before every home had a telephone, the USPS pneumatic tube system spanned 120 miles collectively and could deliver 6 million pieces of mail per day. And during World War II, it created V-Mail to microfilm letters and ship them to soldiers serving overseas.

So, this week, why not do two things to help save our Postal Service? First, buy stamps online or from a vending machine. Then, mail letters to your representatives in Congress telling them to support the USPS by providing relief now and helping it prepare for the future. After all, if our leaders don’t act, soon you may not be able to mail a letter at all.