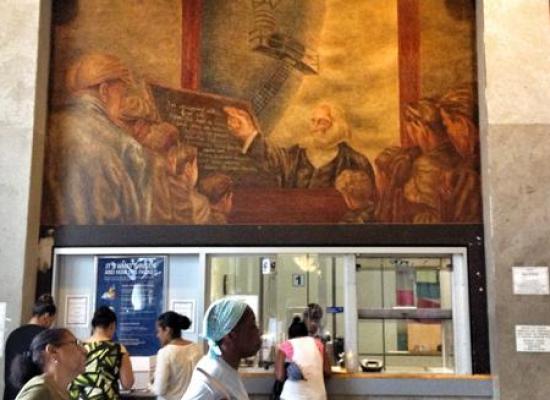 The Bronx General Post Office has been sold.  There’s no word yet on who the buyer is or what the plans for the building are, but the post office was definitely sold two weeks ago.  On the USPS-CBRE website, the listing says simply, "Sold."

The Postal Service has not made an official announcement about the sale, and it is apparently not ready to release any information.  When an attorney working on behalf of the Bronx GPO asked for basic details, the Postal Service’s lawyer suggested filing a request under the Freedom of Information Act.  That usually takes weeks, even months.

The fate of the Bronx GPO is obviously a matter of public concern in the Bronx, and it’s not clear why the Postal Service is so reluctant to share information about who bought the building, how much it sold for, what the plans are, where the postal retail operation is relocating, and so on.  Hopefully, the Postal Service will be more forthcoming about providing answers to these questions soon.

The listing for the Bronx GPO on the CBRE-USPS Properties for Sale website includes several documents related to the property.  One of them is a lease agreement saying that the Postal Service “will require a temporary lease-back period of up to 12 months while its replacement facility is prepared.  During this temporary lease-back period the USPS will pay rent of $1.00.”  Presumably, then, the Postal Service has been looking for a new space in the neighborhood, or it’s going to start looking for one now that the building has been sold.

As for the Bronx GPO itself, the Postal Service has not seemed very interested in sharing information about prospective buyers or consulting with the community about what its needs and preferences might be, but perhaps there have been behind-the-scene discussions with elected officials in the Bronx.

The Postal Service has also not been very influenced by criticisms of how it has been handling the disposal of its historic properties.  In April, the Advisory Council on Historic Preservation recommended that the Postal Service refrain from selling historic post offices until it improved its program and procedures.

Mr. Tom Samra, Vice President of Facilities at the Postal Service, responded with a detailed letter dismissing the ACHP report as “very one-sided and distorted.”  Now, despite the ACHP’s recommendations, Mr. Samra has approved the sale of the Bronx GPO.

The Postal Service’s decision to close and relocate the Bronx GPO was controversial from the moment the plan was announced back in January 2013.  Last year Bronx activist Julio Pabon and yours truly, Steve Hutkins, challenged the decision in an appeal to the Postal Regulatory Commission, but the PRC dismissed the case as a “relocation” decision and outside its jurisdiction.  That ruling is currently being contested in the D.C. Circuit Court by attorney Elaine Mittleman on behalf of Pabon and Hutkins.  Even with the Bronx GPO sold, this appeal may go forward in order to address several important issues raised by the case.

Many organizations and elected officials have come out in opposition to the sale.  Letters were submitted by the Bronx River Art Center, the East Bronx History Forum, the National Post Office Collaborate, the National Trust for Historic Preservation, and the Office of the Bronx Borough President.  In addition, nine New York City Council members, ten New York State Assembly members, six New York State Senate members, and three members of the U.S. House of Representatives all signed a letter opposing the sale.

In April of this year, a coalition of elected officials that included New York Mayor Bill De Blasio and Senators Kristen Gillibrand and Charles Schumer urged that the sale be put on hold.  Congressman José Serrano also introduced legislation halting the sales until the Postal Service implements the ACHP recommendations, just as he had worked to get the Postal Service to stop the sales while the USPS OIG wrote its own report on the matter.

In spite of all the public opposition, legislative efforts, the OIG report, and the ACHP recommendations, the Postal Service went ahead and sold the Bronx General Post Office.  We’ll have to wait a bit longer to learn what’s going to happen to the building and to the priceless Ben Shahn murals on its walls.

For more on the Bronx GPO: