A new trend is emerging.  The Postal Service is closing post offices in downtown areas and busy shopping centers, and moving retail services to a carrier annex on the outskirts of town.

The “annexation” process began a long time ago, when the Postal Service started moving carriers from the main post office or a branch out to an annex, leaving only the retail services behind.  Now they’re moving the retail business to the annex, too. 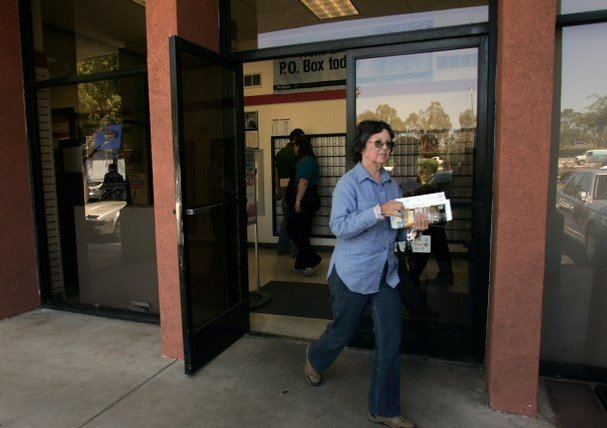 A few days ago, there was news it was happening in Redmond, Washington (a town famous for biking), and it's the same story in Cottage Grove, Minnesota.

Today local news is reporting that the post office in Newbury Park, California, will be relocated to the carrier annex as soon as the lease ends next April.

The Newbury Park branch is located in the Stagecoach Plaza.  It’s a typical suburban shopping center, nothing special in terms of history or architecture.  The Postal Service leases the space, so we’re not talking about selling off a significant New Deal post office like those in Camas, Santa Monica, Northfield, Ukiah, and Norwich.

But the Newbury Park post office has been in the Stagecoach Plaza for 44 years, and it’s a busy place, conveniently located for people shopping and dining in the area.  There are 14 stores and restaurants right in the plaza, and on either side are more stores, a couple of big motels, and not too far away, more shopping centers.

The distance from the current post office (A on the map) to the new location in the annex (B) isn’t a big deal.  It’s just three miles — a six-minute drive up the 8-lane freeway.  People live in their cars in California, and another few miles won’t mean much.

But the annex is located at the dead-end of a service road that runs parallel to the freeway.  There’s nothing around but empty space.  No stores, restaurants, no place else you might stop by on an errand.

The annex itself is a sprawling warehouse — no windows, nothing inviting.  It was built to make it easier for trucks to pick up and deliver the mail, not for regular customers to stop by on a postal errand.  People will dread going out to the annex to mail a package or pick something up.

Most of them will probably switch over to the UPS store.  Did we mention that there’s an UPS store in the Stagecoach Plaza, just a few doors down from the US post office?

News of the relocation took the owners of the plaza by surprise because the post office never appeared on any closing list, but one of the customers told the local news that he had been hearing from postal workers for months that a relocation was in the works.

The Postal Service says there will be a community meeting, but don’t expect a full-blown discontinuance process.  As with so many recent closures, the Postal Service says they're not “closing” the post office — they’re just “relocating” it.  The community won’t have much say in the decision, and they won’t be able to appeal it to the Postal Regulatory Commission, which considers relocations out of its jurisdiction.

The Postal Service says it will save $179,232 on the rent, but it says nothing about how much business it will lose to UPS.  The Postal Service doesn't seem very worried about sending some of its revenues to competitors.  That may actually be the goal.  Like outsourcing and selling off post office buildings, running the business into the ground is just another way to privatize the Postal Service.