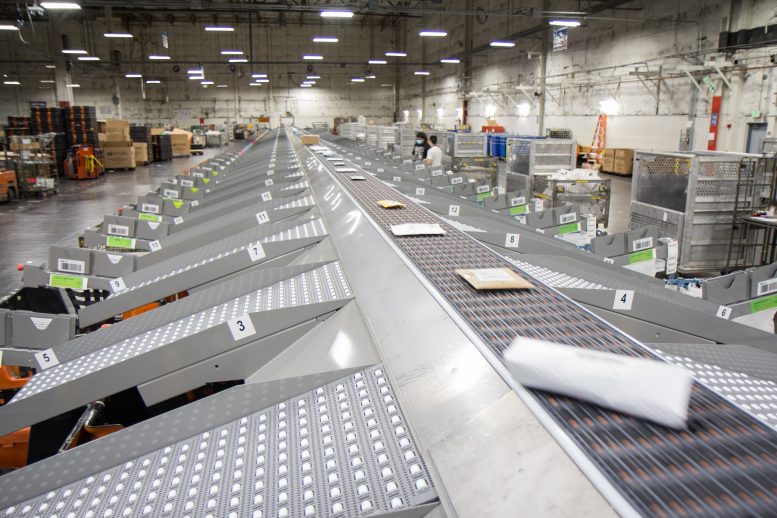 As part of its Delivering for America plan, the Postal Service has promised to “procure and deploy more than 185 new package sorters.” This statement has remained somewhat vague in the messaging materials, but the Postal Service recently invited the media to the Seattle Processing & Distribution Center for a first-hand look at one of the new sorting machines in operation.

The Seattle P&DC lies in South Seattle and is a major sorting facility in the northwest U.S. Comprising almost a million square feet, the facility sorts all mail destined for zip codes 98001-98297. It is also the sort facility for most mail originating in the area (a nearby annex sited closer to the airport handles outgoing Priority Mail).

The new package sorter at the Seattle P&DC, which is currently set up to sort only outgoing packages, is capable of sorting packages to 100 different destinations. The operation can handle packages up to approximately 24 by 18 by 12 inches in size. Larger packages are sorted elsewhere in the facility. 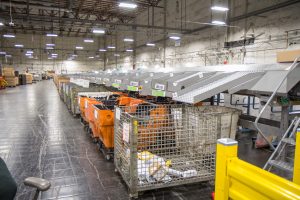 Employees unload packages on to a conveyor, ensuring the barcode is face up for the scanner. The packages then pass through a scanner that can read the barcode in any orientation. From there, packages travel down the conveyor belt and are automatically dropped into the appropriate bin or sack for the destination sort facility. 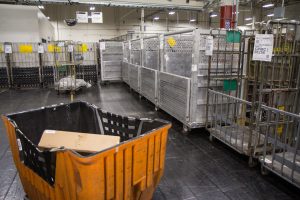 Before the introduction of this machine, employees sorted packages into different carts by walking around and dropping them in manually. The new sorting machine makes a night-and-day difference. The number of packages that can be sorted per hour has increased tenfold, the amount of strenuous and repetitive work an employee has to do has been greatly reduced, and, since the only human intervention is facing the barcode up, the machine virtually eliminates mis-sorts from human error.

All three of these improvements are huge boons for an agency facing employee retention problems, and it’s nothing short of astonishing that it has taken until 2021 for machines of this caliber to be deployed.

It should be noted that this is not the first package sorter at this facility. Another machine, known as a “locust” (due to its shape), already sorts packages at the facility, and can handle larger and heavier ones than this machine can. 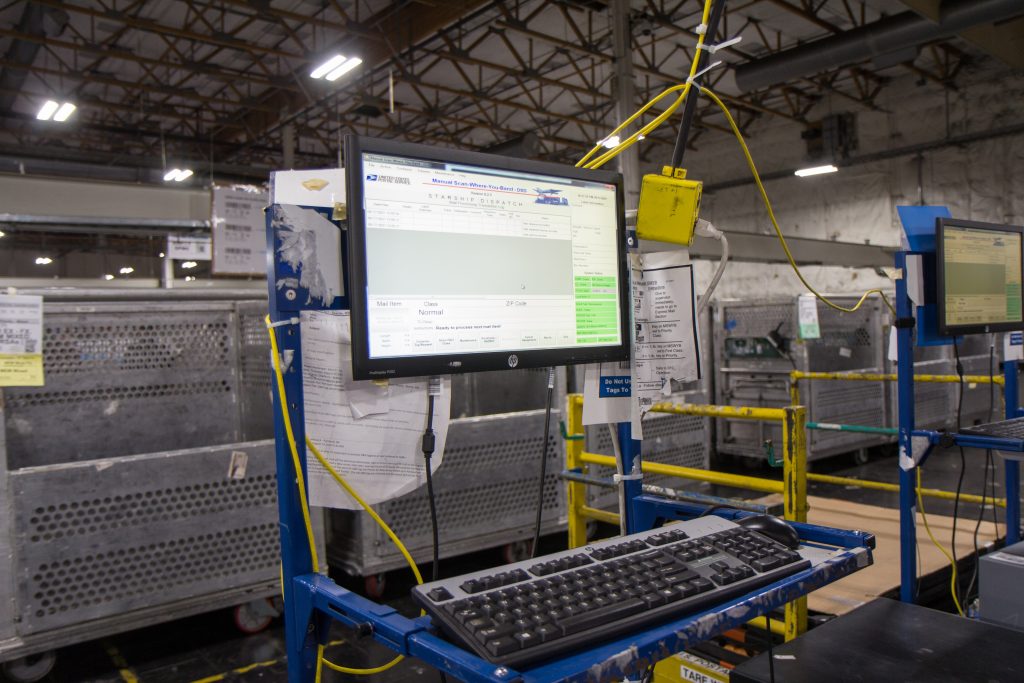 After being sorted into larger cardboard totes or metal bins, the packages that will be transported by surface mode are loaded on to trailers to be trucked to their destination. For packages that will get air transport, sacks get sealed up and brought to another part of the facility where they are weighed and scanned. In less than a second, a large database of airline routes is checked to determine the most efficient route, and then a computer prints out a label, which looks just like a luggage tag. Some parcels will fly in the cargo hold of passenger flights, while others go on cargo airlines. The sacks are then sorted into carts by airline and then trucked directly to that airline’s air cargo facility. 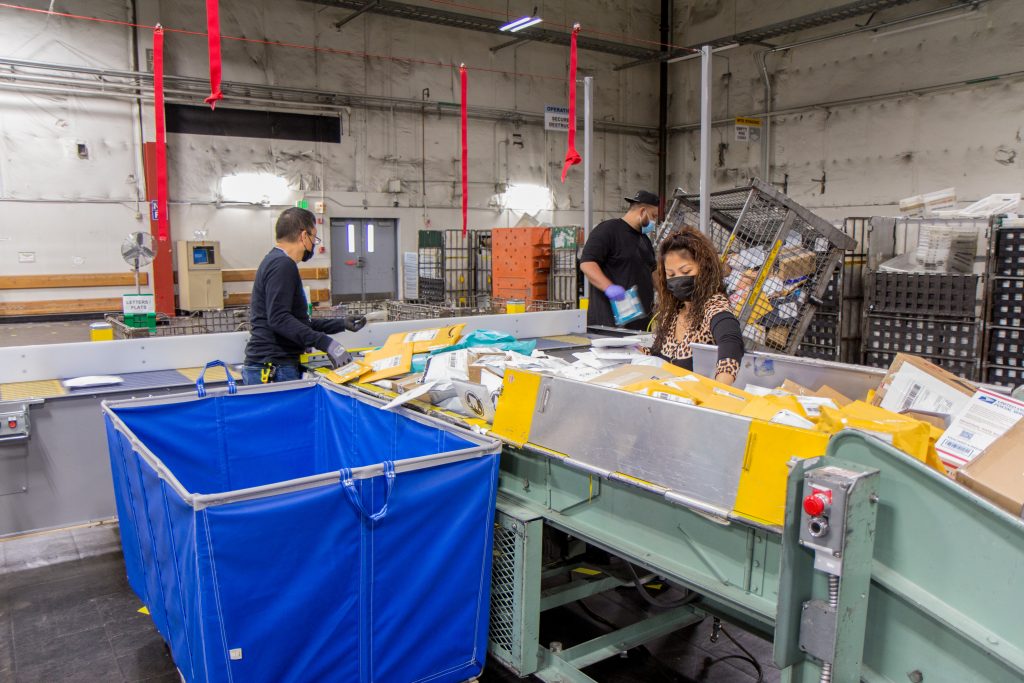 Employees unload packages from bins and face their barcodes up

In the future, officials plan to run this new machine several more hours per day than they’re running now in order to sort destination packages—those that are destined for zip codes near the facility. This would come with a huge advantage because packages will be sorted by carrier route instead of just by post office. Currently, once each cart reaches the destination post office, another employee then sorts the packages for each individual route. Depending on the volume, this process can take 6 to 8 hours. For the busier offices, employees start their shift around 2 a.m. and sometimes as early as midnight so that mail carriers can hit the streets by 8 or 9 a.m. 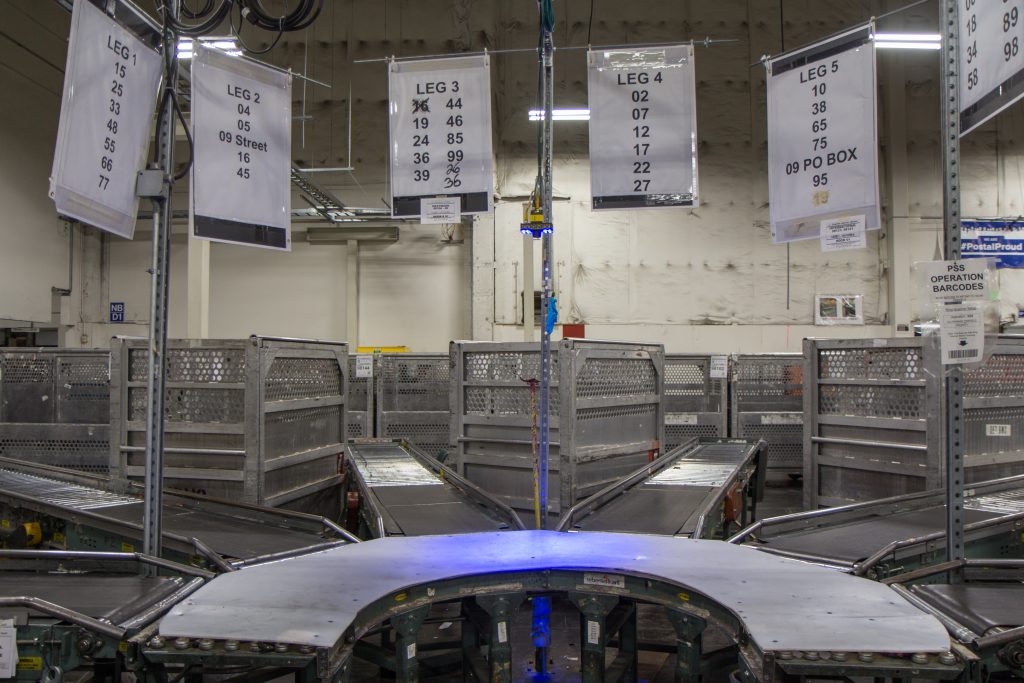 The “spider” manual sorting operation used before the new machines

The current process of sorting packages to post offices is tedious, and there are several opportunities for errors. Mail arriving at this facility could be sorted by the first two or three digits of the zip code. For packages destined for the city of Seattle, which is all zip codes beginning with 981, an employee unloads packages from carts and then places them on to one of six conveyor belts. Each of those six belts leads to another employee who sorts them to several other carts, each going to a different post office. A third sort occurs at the post office. These three touch points each rely on humans and create opportunities for mis-sorted packages. 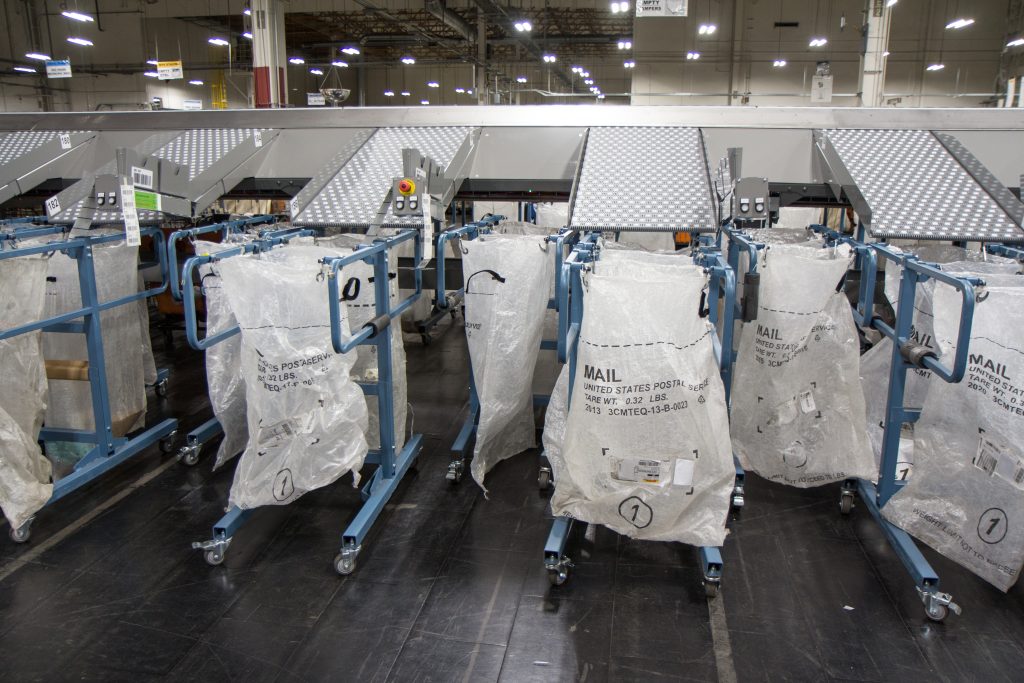 Later this year, a new facility in the nearby city of Tukwila will be set up to handle sorting and surface transfer originating from the greater Seattle area to some of the longest over-the-road routes. Long haul routes, especially those to the east coast, would remain on the airlines (both passenger and cargo).

All in all, these new sorting machines are a huge improvement over the Post Office’s existing manual sorting process and should help to alleviate the huge delays seen in late 2020 as long as the appropriate transportation is secured for each route. And with enough automation around the country, we might one day be able to look forward to shorter transit times.

Below is a slideshow with more photos of the sorting operation, available on Flickr here. (Hover over the image to start the slides.) 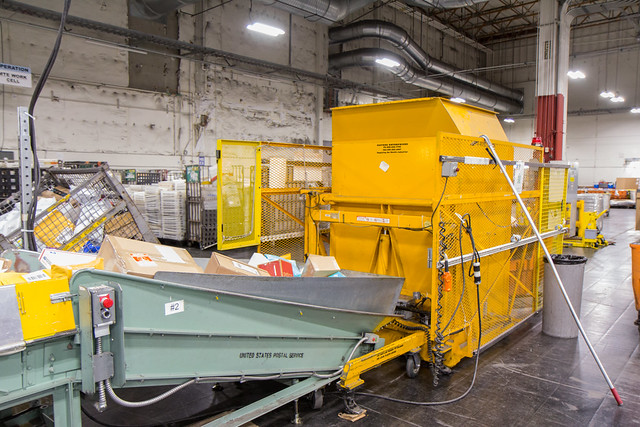 Tim Bond is a software developer, based out of Seattle, who is fascinated by postal operations. Tim gives a special thanks to Plant Manager Len DeLeon, Manager of Distribution Operations Charles DiCarlo, and Corporate Communications Specialist Ernie Swanson for hosting the tour and allowing him to share the event with readers of Save the Post Office.