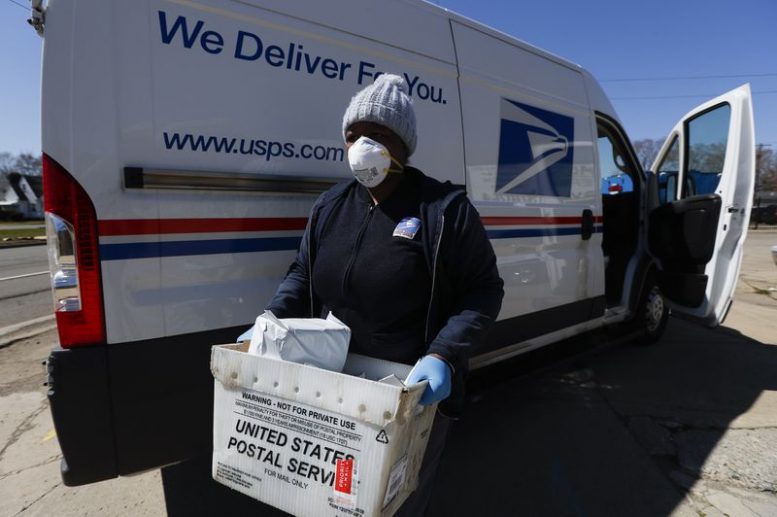 Washington Post: “Trump says he will block coronavirus aid for U.S. Postal Service if it doesn’t hike prices immediately” — “President Trump on Friday threatened to block an emergency loan to shore up the U.S. Postal Service unless it dramatically raised shipping prices on online retailers, an unprecedented move to seize control of the agency that analysts said could plunge its finances into a deeper hole.”

The Sun Sentinel: “Why the U.S. Postal Service needs emergency funding to survive the COVID-19 pandemic” — “The U.S. Postal Service is in danger of collapsing due to the COVID-19 pandemic. While people are ordering more packages, in recent weeks overall mail volume (a key source of revenue for the agency) plummeted by the largest percentage since the 2008–2009 Great Recession.”

Washington Post: “Trump administration considers leveraging emergency coronavirus loan to force Postal Service changes” — “The Treasury Department is considering taking unprecedented control over key operations of the U.S. Postal Service by imposing tough terms on an emergency coronavirus loan from Congress, which would fulfill President Trump’s longtime goal of changing how the service does business, according to two people familiar with the matter.”

WBUR: “The USPS Is Always There For Us. It’s Time To Return The Favor” — “The COVID-19 pandemic continues to wreak havoc on workers, families and our communities — revealing and exacerbating many of our nation’s deeply entrenched social and economic inequities.”

Associated Press: “House rescue package includes $25 billion for Postal Service” — “A new coronavirus aid package released Tuesday by House Democrats includes $25 billion for the cash-strapped U.S. Postal Service, which could run out of money by the end of September without a taxpayer bailout. Mail volume is down by more than 30% from last year because of the pandemic, and the Postal Service says losses will increase by more than $22 billion over the next 18 months.”

The New Yorker: “We Can’t Afford to Lose the Postal Service” — “I am probably one of the least consequential things my mother has ever delivered. She has two other daughters, for starters—one’s a public servant and the other is a special-education teacher. But she’s also spent her working life delivering love letters, college acceptances, medications, mortgage papers, divorce filings, gold bars, headstones, ashes, and care packages.”

New York Times: “A Fight Over the Future of the Mail Breaks Down Along Familiar Lines” — “Its roots stretch back almost 250 years to the Second Continental Congress. Americans consistently rate it their favorite federal agency, and with a work force of more than half a million scattered across the country, it employs more people than any government entity outside the military.”

Vox: “If the US Postal Service fails, rural America will suffer the most” — “Since the coronavirus pandemic hit, the volume of mail delivered by the US Postal Service has drastically declined. Businesses have cut back on sending advertisements and bulk mail — the agency’s main source of revenue — leaving it on track to possibly run out of money by September.”

New York Times: “The Postal Service Is the Most American Thing We’ve Got” — “It would be difficult to think of a time when we have depended more on the United States Postal Service. With tens of millions of Americans quarantined in their homes, the steady delivery of checks, letters, food and medical supplies is a lifeline.”

CityLab: “Privatize the Post Office? Here’s Another Idea” — “At this very moment, U.S. Postal Service carriers are delivering masks and respirators to the front lines in the battle against the coronavirus pandemic. They are moving test kits to labs and prescription medication to seniors. Mail carriers are handing off safe ballots for upcoming elections in Georgia, Maryland, Pennsylvania, and other states.”

The Atlantic: “Save the Postal Service” — “When i carried the mail in Durham, North Carolina—back in the 1990s, before I became a historian—an older man used to greet me joyfully, “Here comes Uncle Sam!” To him, and to others on my route, I represented not just the chance of a letter, but also a connection to the federal government—and to an institution that had probably provided a relative with a steady job, and a path into the middle class.”