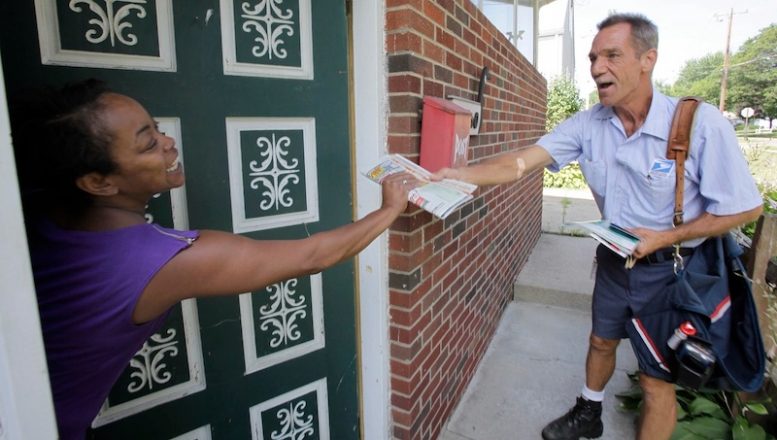 The Atlantic: When I carried the mail in Durham, North Carolina—back in the 1990s, before I became a historian—an older man used to greet me joyfully, “Here comes Uncle Sam!” To him, and to others on my route, I represented not just the chance of a letter, but also a connection to the federal government—and to an institution that had probably provided a relative with a steady job, and a path into the middle class. The United States Postal Service is among the country’s most popular institutions, enjoying approval ratings as high as 90 percent. The USPS delivers 48 percent of the world’s mail to 160 million homes. Yet in late March, as the Postal Service struggled to deal with the fallout of the coronavirus pandemic, President Trump threatened to veto a version of the $2.2 trillion bipartisan CARES Act stimulus package that contained a $13 billion grant to help the USPS keep meeting its payroll, gassing its vehicles, and paying its suppliers. What he finally signed instead included a $10 billion loan that would require approval by the Treasury Department.

Trump’s move triggered a wave of disbelief, with people taking to social media to thank letter carriers and buying stampsto keep the USPS afloat. But the truth is, the Postal Service has been under attack by conservatives for years. Trump’s personal hostility to the USPS—“the Post Office is a joke,” he said on Friday—merges with a long-standing Republican embrace of both postal privatization and the trope that the USPS is a mismanaged business. The Trump administration is now playing a costly game of chicken to get what it sought long before the current crisis: drastic service and facilities cuts, more noncareer labor and outsourcing, and a rollback of employee rights and benefits. If it succeeds, we’ll all be the poorer for it.

America’s post office was a revolutionary idea, born in 1775. From the start, it was intended to serve as a political and information network, a sharp contrast with European countries’ postal services, which primarily existed to bring revenue into the treasury. Today’s USPS is the direct descendant of the original U.S. Post Office Department.

On March 18, 1970, the successors of the original post riders revolted against both their employer and their union leaders in an eight-day nationwide illegal wildcat strike, demanding a living wage and job dignity as well as greater union democracy. The roots of the Postal Service’s current financial crisis lie in the compromise legislation that followed the strike, the 1970 Postal Reorganization Act. The act replaced the Post Office Department with a hybrid government agency and corporation that would provide full collective-bargaining rights to employees, become financially self-supporting, and continue to provide universal service at reasonable rates. Although the USPS provides a service mandated by the Constitution and federal law, it has received no federal funds since 1982, relying on postal product sales to keep revenue ahead of expenditures.

The Post Office has historically provided an avenue toward middle-class stability for a wide variety of Americans—veterans, new immigrants, rural migrants—but for no group has it been more important than for African Americans. The Post Office was for many years the nation’s largest employer of black workers; in the decades that followed its conversion into the USPS, blacks were at least twice as likely to work for the Postal Service as whites. The Postal Service today is 37 percent minority and 37 percent female.

Conservatives, who had previously argued for the privatization of the Post Office, continued those efforts after the 1971 creation of the Postal Service. But not until 2006, during the George W. Bush administration, did those efforts gain much traction. That year, Congress passed the Postal Accountability and Enhancement Act, imposing a unique burden on the Postal Service by requiring it to pre-fund retirees’ health benefits through annual payments of roughly $5.5 billion, for 10 years. These obligations, the rise of the internet, and the Great Recession combined put the USPS in the red, where it remains today: The USPS had $11 billion of outstanding debt at the end of the last fiscal year (which was up to $14.4 billion as of April 1). Excluding those debt payments, it should be noted, the USPS has finished each year with revenue surpluses for most of the past decade—as a 2018 Trump administration report documented.

The Postal Service survived the 2008–09 crisis in a diminished state. American homes and businesses did not stop growing or depending on the USPS, but hundreds of post offices and mail-processing centers were shuttered, many others had their hours cut, some services were reduced, and the postal workforce has lost 126,000 career positions since 2009.

After years of indifference to the plight of the USPS from Republican-led Congresses, things finally seemed to be improving. On February 5 of this year, the House passed the USPS Fairness Act by a vote of 309–106—including support from almost half of House Republicans—and sent it to the Senate. But the bill is still sitting there, and in the interim, COVID-19 struck.

The volume of mail the USPS is delivering has already fallen by nearly one-third compared with last year, and it is now projected to lose $22 billion over the next 18 months. Postal workers are still doing their jobs, despite the risks; so far 1,219 postal workers have tested positive for the coronavirus, and 54 have died. The CARES Act included a $500 billion bailout for large corporations, but no help for the Postal Service. Treasury Secretary Steven Mnuchin threatened to use any loan money to coerce the USPS to raise its package-shipping rates, allow him to oversee the hiring of senior USPS staff (including a new postmaster general), and demand union concessions. Trump confirmed this strategy as he signed the latest stimulus package on April 24, declaring that no loans would go to the USPS if it didn’t quadruple package rates.

Trump’s willingness to block proposed bailout funds to the USPS—a 245-year-old government service—may reflect his personal grudge against Jeff Bezos, the CEO of Amazon (and owner of The Washington Post), combined with an ignorance of how the USPS actually works. But it also reveals a conservative hostility to the Postal Service that antedates the current crisis. In its 2018 report, a Trump-appointed task force (led by Mnuchin) suggested drastic service and facilities cuts, more noncareer labor and outsourcing, and an end to the American Postal Workers Union’s collective-bargaining rights.

Just like the first USPS crisis, sparked by the pre-funding requirement, this one is unnecessary and politically manufactured; and just like that earlier crisis, it is also very real. It threatens the center of America’s $1.6 trillion mailing industry, which employs 7.3 million people. The Postal Service can’t simply file for bankruptcy; the USPS is not a private corporation like FedEx, UPS, or Walmart—which even together could not handle the U.S. mail, contrary to some privatization fantasies. But with the USPS now projecting it will run out of operational funds by September, Trump could cripple the nation’s mail by blocking aid, forcing the USPS to prioritize which vendors to pay and which services to curtail. The USPS has said that it needs $89 billion in assistance, including $25 billion in grants.

Will House and Senate Democrats hold the line in future stimulus packages for USPS relief? Do they have the political will to save universal postal service along with 630,000 government jobs—80 percent of them good-paying career positions? To preserve the USPS is not to merely conserve it as some relic of the past. The 1970 Postal Reorganization Act says that the USPS should “bind the nation together.” Who else will distribute stimulus checks (as the unemployment rate climbs past 14 percent), census forms, online purchases, letters, parcels, books, magazines—in fact, anything that takes postage? How else can Americans vote by mail—as they now do in six states, and may soon need to do in all 50? Postal workers are out there right now, delivering face masks and test kits, and hopefully one day soon they’ll be delivering vaccines as well.

In 2011, during the last postal financial crisis, I wrote an op-ed in The Washington Post warning of what we’ll lose if we lose the Postal Service. That isn’t just the services it provides—that’s the jobs, the path into the middle class, and the glue holding communities together. So much has changed since then, but that much remains the same.