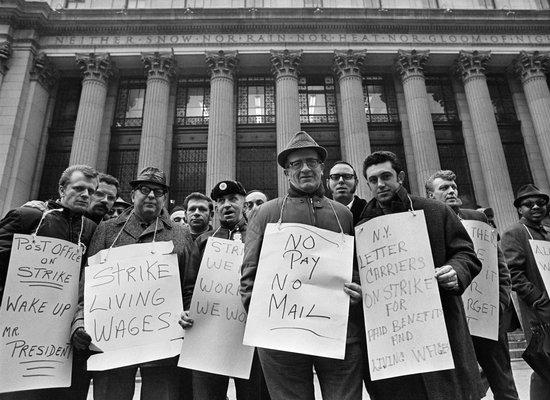 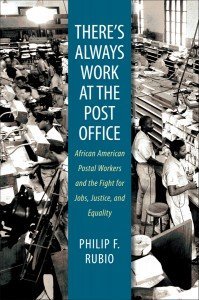 Philip F. Rubio is author of There’s Always Work at the Post Office: African American Postal Workers and the Fight for Jobs, Justice, and Equality.  Rubio, a historian and former postal worker, brings to life the important but neglected story of African American postal workers and the critical role they played in the U.S. labor and black freedom movements. Having fought their way into postal positions and unions, black postal workers—often college-educated military veterans—became a critical force for social change. Centered on New York City and Washington, D.C., the book chronicles a struggle of national significance through its examination of the post office, a workplace with facilities and unions serving every city and town in the United States.

In this post, which originally appeared on the UNC Press Blog, Rubio marks the anniversary of the U.S. postal strike of 1970 by looking at its importance in both the lives of employees as well as the history of the postal service itself.

Who Remembers the Nationwide Postal Wildcat Strike of 1970 (and Why Does That Matter)?

Judging from sparse media references as well as historical scholarship, the answer to that question appears to be, sadly, not a whole heck of a lot of people. But what about those who participated in it? That is a whole other story, as I continue to find out firsthand in recording strike veteran narratives. Their stories, combined with readily available evidence already out there, should help make a convincing case for why this was such an important event in United States labor history. One could even argue that it even deserves as much attention as, say, the Flint Sit-Down Strike of 1936-37, where GM autoworkers in Michigan fought for control of the work process and won union recognition for the United Auto Workers union.

In 1970 what happened in a nutshell was this: postal workers had become fed up with working for wages that had lagged so far behind over the years that many were working second and third jobs to make ends meet. In cities like New York and Washington, D.C., many postal workers were even collecting food stamps and welfare. At the time, federal government employees only enjoyed partial collective bargaining rights (provided by Executive Order 10988 in 1962). That meant they had to lobby Congress for pay raises—a process they dubbed “collective begging.”

On March 12, a rank-and-file caucus of Branch 36 (Manhattan-Bronx) of the National Association of Letter Carriers (NALC) spearheaded the demand for a branch strike vote. Striking the federal government has been illegal since 1912. But that is exactly what Branch 36 voted to do on March 17. Picket lines went up at midnight all over New York City. Other NALC branches voted to strike, spreading upstate and into New Jersey, Massachusetts, Connecticut, Pennsylvania; then west to Ohio, Illinois, Michigan, Colorado, and California. Together they shut down 671 post offices in dozens of cities and towns across the United States. Clerks, mail handlers, maintenance workers, motor vehicle operators, and other crafts from other postal unions joined what became the largest “wildcat strike ” (one not authorized by a national union) in American labor history. Over 200,000 postal workers struck for eight days. Despite the inconvenience of a total mail stoppage, strikers enjoyed the support of the majority of Americans.

Court injunctions were served on local union leaders, fines were levied, and government officials threatened to break the unions. President Richard M. Nixon called up 26,007 troops in an effort to break the strike by moving the mail—which failed. The strike ended on March 25 when strikers were convinced by union leaders to return to work after negotiations with Nixon administration officials. No one was fired or jailed. Further negotiations led to legislation signed that August by Nixon granting a 14% raise, with top pay “compressed” to 8 instead of 21 years, and full collective bargaining rights (except the right to strike) under a reorganized self-supporting hybrid government agency-corporation in 1971 called the U.S. Postal Service. 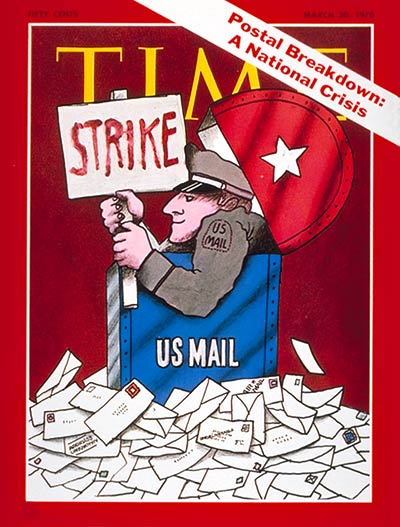 Who were these people? I’ve interviewed strike participants from New York to California, Denver to Detroit, and “almost strikers” from Miami, D.C., and Atlanta. Unfortunately, many older postal strike veterans have passed away, although some have left their recorded stories behind. But I was lucky enough to be able to interview 55 letter carrier strike participants at the 2014 NALC national convention. I had already interviewed 11 strike veterans from carrier, clerk, and mail handler crafts as part of the research for my first book on the post office, There’s Always Work at the Post Office: African American Postal Workers and the Fight for Jobs, Justice, and Equality (University of North Carolina Press, 2010).

There was a real diversity of strike experiences across the country. Participants told me of strike debates and votes held in union halls, bars, “swing rooms,” or even on the workroom floor. Some of these debates and votes started in the weeks preceding the strike, while others happened spontaneously. Once the strike started, some local union officers would have to “disappear” to avoid being served with court injunctions. Real rank-and-file leadership was being exercised by those who often had little or no experience in daily union affairs, and whose only communication was telephone, word of mouth, or news reports. I even spoke to one of the soldiers who had been called up by Nixon to move the mail in New York during the strike. He corroborated stories commonly told of troops unable to master mail-sorting in a few days but also sympathetic to strikers—some of whom had been called up as reservists and were working next to them.

The wildcat strike (really a general strike) transformed the post office and its unions. As it was itself inspired by other public sector strikes in New York during the 1960s, the 1970 nationwide postal strike in turn inspired no small amount of labor militancy and engagement. Every strike veteran I’ve interviewed or read has expressed pride in their action and the outcome despite the risks. Turnover dropped dramatically as post office work became a well-compensated, desirable career. In many ways, this strike helped revive a stagnant post office. But somehow today, forty-five years later, as it continues to grow with America, the post office has become a target for elimination or privatization.

Philip F. Rubio is associate professor of history at North Carolina A&T State University in Greensboro and author of the award-winning There’s Always Work at the Post Office: African American Postal Workers and the Fight for Jobs, Justice, and Equality. For video of his guest appearance on the Colbert Report and links to additional articles and media appearances, check out his author page.