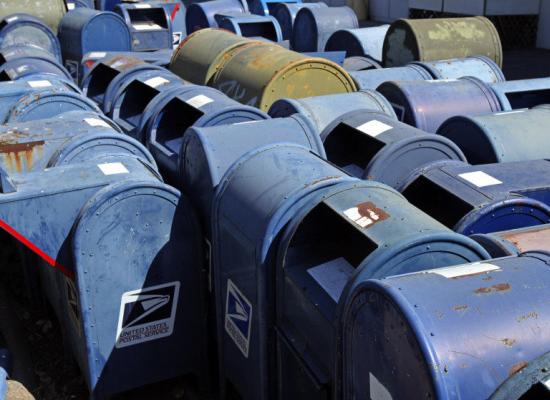 Finding a good old-fashioned mailbox where you can drop off a letter is becoming almost as difficult as finding a pay phone.  The iconic blue boxes are getting to be few and far between.

Fifteen years ago, there were almost 400,000 collection boxes in the country.  Now there are fewer than 160,000 of them, and the number goes down every year.

Earlier this week the Postal Service submitted its Annual Compliance Report (ACR) to the Postal Regulatory Commission for the Commission's Annual Compliance Determination report.  The main purpose of the review process is to determine the extent to which each type of mail is covering (or not) its attributed costs.  The ACR therefore contains a mountain of data about postal rates.

According to the Postal Accountability and Enhancement Act, which says what the ACR should include, the  Postal Service is also supposed to report on customer access to postal services.  But the subject gets just one page in the report, and collection boxes merit just one sentence:

The ACR also includes a table showing the number of boxes, area by area, at the end of FY 2012, 2013, and 2014.  The following table uses those numbers, along with the year-to-year changes in percent from the previous year.

Nationwide, over the past two years the number of boxes has decreased by nearly 8,000.  That's the net decrease.  Considering that the Postal Service sometimes puts up boxes in new locations, it's likely that more than that have been removed.  Even so, the rate of decrease — 2.1 pecent over the past year —  is not as bad as it's been in previous years, as a look at the history of collection boxes shows.

Collection boxes were first introduced in 1858.  In their heyday, the boxes also served as storage facilities for carriers who made their rounds on foot, holding items such as rain gear and coats.  Now that most carriers have vehicles, the gear is in the truck and the mailboxes just collect mail. 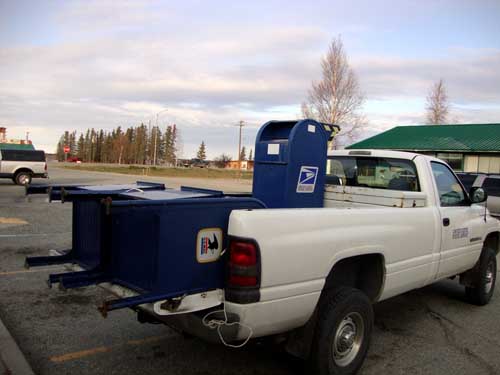 For well over a century, the number of collection boxes grew along with the population of the country.  By the early 1970s, there were almost 400,000 of them.

According to data provided to the PRC by the Postal Service (in connection with a complaint filed by postal watchdog Douglas Carlson in 2002), the number of boxes fluctuated throughout the 1970s and 1980s, sometimes going up, sometimes down.  In some years, there were as few as 260,000, while at other times, there were as many as 386,000.  According to this USPS report, in 2000 there were still 365,000 collection boxes on the street.

Then in 2002, in order to save fuel and labor costs, the Postal Service began an aggressive program to cull what it considered underused boxes.  Over the next few years, the number of collection boxes decreased dramatically.  A 2009 news report observed that the Postal Service had been removing the boxes nationally at the rate of more than 60 per day.  According to a BBC report, there were 175,000 boxes as of July 2009.

Since then, the rate of decline has diminished considerably. Over the past two fiscal years, some 7,750 boxes have been removed — about 15 per day.

In order to identify which boxes are underperforming, a postal employee does a density check that involves counting pieces of mail per day over a period of two weeks.  Back in 2006, when the Postal Service was aggressively removing the boxes, if there were fewer than 50 pieces of mail per day, a box could be targeted for disposal.

According to the Postal Operations Manual, the current policy is that if a mailbox isn't seeing an average of 25 pieces per day, the Postal Service may remove it.  The Postal Service is required to post a 30-day notice on the box before it’s removed, and customers are invited to comment.

While the rate of removing boxes may not be as bad as it was a few years ago, customers still don’t like it when their box vanishes.  News articles regularly report collection boxes disappearing and customers complaining.

This past summer, there was a report that 39 boxes had been removed from the streets of Rockford, Illinois, which left the city with 102.  In January, 16 boxes were removed from Redlands, California, after the Postal Service determined that they were being underused.

Earlier this month, a news team in Coronado, California, observed that several boxes had vanished.   A mail carrier said that many folks along his route had complained about the “missing boxes.”  He also said that it's harder for the elderly to get down to the post office or find parking.

And that’s basically the issue: By removing the collection boxes, the Postal Service saves some money, but the savings comes at the expense of average customers, who end up having to spend their own time — and often gas too — going to a box that is further away.

In addition to culling the blue boxes, there’s the issue of collection times.  The Postal Service has a history of moving up the collection times to earlier in the day, often to help make postal managers look good so they can earn bonuses.  That practice may have become more common now that the deadlines at processing plant consolidations have been moved up as a result of all the consolidations.

Mail deposited in the box after the pickup ends up sitting there an extra day.  It's another way the Postal Servce slows down the mail in order to save some money. 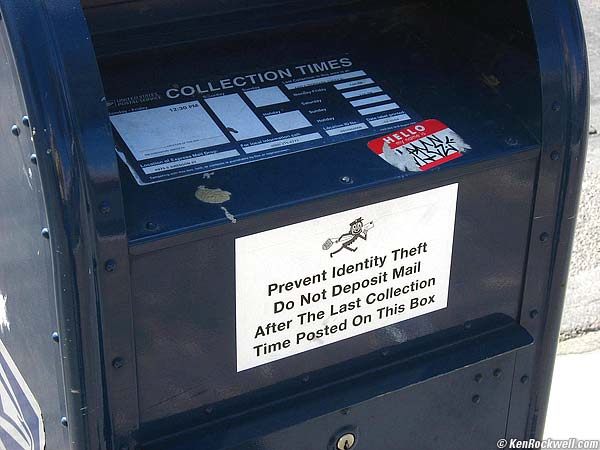 According to Carlson’s findings, problems with collection services  are pervasive, and postal regulations and directives are regularly ignored.

A year ago this week, Mr. Carlson filed a lawsuit against the Postal Service challenging its lack of cooperation in responding to his FOIA request for data about collection points.  Carlson had made several requests for information about collection points where the final collection time has been moved to earlier in the day compared to what it was at the end of 2012.  The case is still working its way through the court system.

While the USPS has been getting rid of its collection boxes, the number of FedEx boxes has just been increasing.  According to the FedEx website, there are now more than 43,000 FedEx drop boxes, “conveniently located near where you work and play” — grocery stores and shopping malls, airports, and office buildings. There are also many FedEx boxes standing right in front of your neighborhood post office.

That’s because in 2001 Postmaster General William J. Henderson made a groundbreaking deal with FedEx CEO Fred Smith.  The Postal Service agreed to pay $6.3 billion over seven years to use spare capacity on FedEx aircraft to carry the mail.  As part of the new alliance, the Postal Service also gave FedEx the option of putting a drop-box in front of every USPS location.

In the first eighteen months of the contract, FedEx planned to put 10,000 drop boxes in front of post offices (sometimes inside).  According to the contract, depending on the number of boxes it placed, FedEx would pay between $126 million and $232 million for the opportunity.  FedEx expected to produce approximately $900 million in increased drop box revenues from the deal.

So it was that over the next few years, FedEx put thousands of its own boxes in front of post offices.  In the meantime, in the years 2001 through 2004, the Postal Service eliminated 3,841 of its own Express Mail collection boxes — almost 30 percent of them — as well as removing tens of thousands of regular blue boxes.

The contract with FedEx was a matter of some controversy.  Emory Worldwide Airlines, which had a contract with the Postal Service doing similar air transportation work, didn't like the deal because FedEx was taking away its business.  An Emory spokesperson said, " 'We think this contract is unfair and anti-competitive and that it's illegal because it violates the Postal Service's own procurement regulations that require them to bid competitively for big contracts."

Wisconsin Senator Russell Feingold was also concerned about how the FedEx deal went down.  As Chris Shaw notes in Preserving the People's Post Office, Feingold said this: “In the past, Federal Express has used its clout with the Congress, so it’s fair to ask whether its powerful lobby paved the way for the strategic alliance with the U.S. Postal Service…  FedEx competitors, employees, and American consumers are entitled to ask whether or not the deal is a good one for the country. The lack of openness in the decision-making process also is cause for concern.”

Postmaster General Henderson was a big advocate of partnering with the private sector.  Shortly after his retirement, a few months after making the FedEx deal, he wrote an op-ed for the Washington Post entitled "End of the Route; I Ran the Postal Service; it Should be Privatized."  It begins like this: 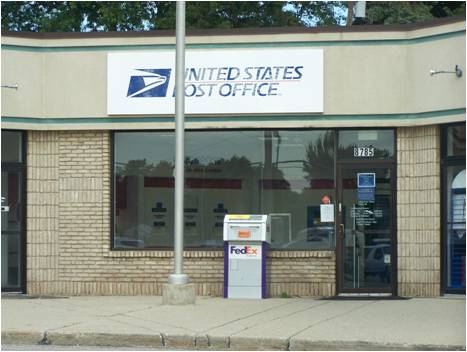 "While having contracts with private companies is nothing new (airlines have tossed sacks of mail into their cargo holds for as long as they've been flying), the deal with FedEx, the Postal Service's traditional competitor, is a major step forward in the Postal Service's increasing collaboration with private business.  The most visible sign of that collaboration, and the symbol of the extent to which the Postal Service is rethinking business as usual, are the distinctive FedEx drop boxes that began appearing at neighborhood post offices last spring."

Henderson went on to note that many foreign postal systems were being privatized and then made his own position very clear: “What the Postal Service needs now," wrote the Postmaster General, "is nothing short of privatization.”

The FedEx partnership with the Postal Service has grown significantly over the past thirteen years.  Last year, FedEx was once again the USPS’s top supplier, receiving almost $1.8 billion in payments.

The Postal Service says that after a collection box is removed, it’s sold for scrap metal.  But this commercial for the "USPS Is Everywhere" ad campaign shows where the boxes really end up.

In a few days, the PRC will ask the Postal Service for a list of all the collection boxes in operation as part the Commission's compliance determination review.  Till then, you can find last year’s list, with all the collection times, here.

You can find the collection boxes near any location on the USPS Find Locations page.  Just select “Collection Boxes” in the Location Types.  The site also indicates the collection times.

There’s a good discussion of the history of collection boxes and times and Mr. Carlson’s efforts in Chris Shaw’s Preserving the People Post Office (pp. 90ff).

There’s a great post on Going Postal showing some of the variety in the style of collection boxes.  (They’re not all blue.)

Correction: An earlier version of this article indicated that mail was being picked up earlier than scheduled on the box, but that's not likely since the carriers scan the box when they pick up the mail.