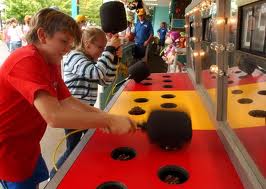 Trying to correct all the bogus postal stories being put out by the media and think-tanks is like playing a game of Whack-a-Mole, and it’s impossible to come out ahead. One day it’s the Congressional Research Service publishing a flawed report on the post office, then it’s the New York Times, and who can keep up with the Washington Post?

Today comes a piece in the International Business Times (IBTimes), “What’s Wrong With the U.S. Postal Service? Five Things to Know.”  The piece is less than a thousand words, so how much can it get wrong?  Turns out, nearly everything.  Here are the five things “wrong with the US Postal Service” and the many things wrong with the article:

1.  “Faster-than-expected sales declines due to evaporation of First Class mail.”  Like just about every news report, the piece repeats the line coming from L’Enfant Plaza that the trend toward e-mail and paying bills online “is growing fast, leaving the USPS with a bloated structure trying to downsize — but the agency can’t do it fast enough.”

Of course digital technology is impacting the revenues of the Postal Service, but it’s not happening all that fast.  The Postal Service, based on research done by the Boston Consulting Group (BCG), anticipates first-class mail declining at a rate of 4% over the next ten years (that’s evaporating?), but mail volume overall declining at the more modest rate of 1.5% a year, with many types of mail actually increasing in volume.

But in order to heighten the “crisis” frenzy, the Postal Service keeps reminding everyone that mail volumes have declined over 20% since peak in 2006-2007.  And the media keeps saying that it’s all due to the internet.  McClatchy-Tribute News, for example, is circulating an editorial that says “Electronic communications options — online banking, bill paying, shopping and other services — have caused the volume of postal mail to fall 22 percent since 2006.”

Yet in its request for an exigent rate increase last year, the Postal Service said the decline was due two-thirds to the recession, and only one-third to “online diversion.”  That would mean the internet is responsible for a 7% decline over the past five years — pretty much the 1.5% a year that BCG anticipates for the next ten years.

The internet effect may be even more modest than that.   In a July 2011 legal brief filed by the USPS challenging the rejection of the rate increase by the Postal Regulatory Commission, the Postal Service suggested that some of that one-third decline attributed to electronic diversion might actually be related to the recession, and as evidence it pointed out that mail volumes were increasing “even in the face of electronic diversion in the years immediately prior to the Great Recession.”

In any case, the Postal Service isn’t talking about downsizing at a rate anything like it’s anticipating in volume declines.  The Postmaster General says he expects to close 16,000 post offices in six years —that’s over 10% a year — and he wants to reduce the workforce from 645,000 to 425,000 over the next four years — also about 10% a year.  That’s seven times faster than the anticipated volume decline of 1.5%.

By the way, it’s worth taking at look at the BCG report on those anticipated declines in mail volume.  The report, which is dated March 2, 2010, mentions the recession a couple of times, but only to dismiss it as having a significant impact on volume declines.  The report mostly blames “online diversion” for the drop, so the declines, it suggests, will inevitably continue over the next ten years as use of the Internet increases, even when the economic recovery kicks in.  It’s no accident that the Postal Service would look to the Boston Consulting Group as a consultant — “the firm has played a major role in preparing companies for deregulation and privatization in post-Cold War Europe.”  Given this orientation, in other words, the report may actually exaggerate the effects of e-mail and online bill paying because the corporate elite wants everyone thinking the declines are steep enough to necessitate major cuts to the workforce and post office network.

2. “Price increase limitations.”  The IBTimes article notes that the PRC turned down the exigent rate increase requested by the Postal Service in 2010, but it doesn’t mention that the Postmaster-General himself withdrew a second request just a few weeks ago, under pressure from the mail industry, which feared even a 4% increase would cut into their profits.

3. “Too many costly retail units.” The piece says, “The postal service is in the midst of a retraction plan, shedding retail units across the country and eliminating jobs.  But it isn’t happening fast enough. . . .  That’s why the agency wants to close 3,700 branches throughout the U.S.  But by the time that happens, that number will already be much larger.”

Forget about the fact that most of the post offices slated for closure are main post offices, not branches, and forget that the number is not 3,700 but 4,379 (3,652 on the RAOI list and 727 on the non-RAOI list).  How can anyone think that closing over 4,000 post offices over the next few months is not fast enough?  It’s taken the past 40 years to close 4,000 post offices.

And what’s this about “by the time that happens, that number will already be much larger”?  What does that even mean?  It makes it sound like new post offices are opening faster than the Postal Service can close them.  Huh?

The piece goes on to say, “The postal service has found that contract retail units, with core operational costs managed by an independent proprietor, work well. . . .  But such contract postal outlets, while cost-efficient, also come under fire when the post office tries to close them. It is politically incorrect to close down community post offices and postal workers don’t like the move, since it eliminates jobs.”

How many things can you get wrong in three sentences?  First, many contract postal units (CPUs) don’t work so well at all, and they require a lot of oversight.  Second, a contract postal unit is not the same thing as a community post office — one is located in a business, the other in a community-owned building, like a town hall.  Third, these units never come under fire when the Postal Service tries to close one.  Postal workers could care less when a CPU closes — in fact, they often relish the closing because they perceive a CPU as a way for the Postal Service to get around employing union workers.  The whole point of a CPU is that it’s operated by a private business and is not staffed by postal workers.  What does come under fire is when the Postal Service wants to close an actual post office, and then the fire comes mostly from the community and not postal workers, who are typically transferred to another facility.

4. “A federal law forcing the USPS to pre-fund its retiree health benefits.”  The article refers to a law passed in 2006 (that would be PAEA) requiring the Postal Service “to prepay benefits costs to the federal government since many of its employees are within the government’s retirement system.”  It proceeds to say the following: “The USPS doesn’t have that money this year, and a payment is due at the end of September. The postal service wants help from Congress to change the law, allowing the USPS to take over its pension and health care benefits directly for its 480,000 retirees and 600,000 active workers.  But Congress is under pressure from postal service worker unions to avoid such a move, making it a political hot potato. One union spokesman representing the American Postal Workers has said: ’crushing postal workers and slashing service will not solve [the USPS’] financial crisis.’

Obviously the reporter has the issues mixed up.  On the one hand, there’s the issue of the pre-payment on retirement benefits.  The unions are not opposed to changing the law to correct this — they are among the strongest advocates of such a change.  And it’s not just the unions — so is the Postmaster General, the postmasters associations, the PRC, the GAO, the OIG, and just about every other agency and accounting firm that has looked into it.  That’s because the retirement fund is overpaid to the tune of $50 to $75 billion.  If some of this overcharge were used to prepay the health benefits fund, it would eliminate the need for the $5 billion due each year, and the Postal Service’s financial picture would not look nearly so dismal.

The other issue is the Postmaster General’s proposal to pull the USPS out of federal health and retirement programs, and of course the unions are opposed to this.  The only reason to make such a move is to give the Postal Service power to reduce its costs by cutting benefits.  But the pre-payment issue has nothing to do with pulling the USPS out of federal benefits programs.

5. “Bureaucratic struggle.”  After calling the Postal Service a “pseudo-government agency,” the piece states, “the postal service is plagued by bureaucratic inefficiencies because it relies upon a direct tie to the federal government. Therefore, while the agency seems to understand the problems with its business model, fixing those problems meets bureaucratic resistance.”

If you can’t read between the lines, that’s the International Business Times saying the Postal Service would be much better off if its ties to the federal government were severed completely.  And that’s really what the whole piece has been about, even though the word “privatization” never appears once.

With “news” items like this going around the mainstream media, how can anyone hope that the country is going to have an intelligent discussion about what actually ails the Postal Service and what might be done to solve its problems?

If you’re not familiar with the International Business Times, its website says it’s an “online global business newspaper, comprising of 17 editions, published in 10 languages across 13 countries.  It is among the top ten online business newspapers in the world.”  Based on what it had to say in this article, the IBTimes looks like it’s not worth the paper it’s not printed on.