Over the past few weeks, there have been several meetings in New York City about the Postal Service’s plans to close historic post offices and move retail services to smaller spaces.  Not many people attended the first of them — about the Bronx General Post Office — because it was held in the morning and with little advance notice.

But three subsequent meetings — on the Triborough (Tito Puente), Old Chelsea, and Peter Stuyvesant stations — were packed with frustrated and angry citizens, worried about what the closures and relocations will mean for postal workers, seniors, small businesses, average customers, and the neighborhood as a whole.

A fifth New York City post office is also set for closure — the Washington Bridge Station at 555 West 180th Street.  Retail services and post office boxes will be relocated to a smaller space a couple of blocks away, at 518 West 181st Street.  The new space is about half the size of the current space, so letter carriers will probably be transferred to other facilities.

The Washington Bridge relocation has been in the works for several years, so it won't come as a big surprise to the community.  But for some reason, the Postal Service has not included this relocation in its discussions with city officials, and there hasn’t been an announcement about a public meeting or comment period.  The Postal Service seems to be treating the Washington Bridge closure as a done deal.  That’s because it is.

A "possible" candidate for closure

Originally named after the nearby George Washington Bridge over the Hudson River, the Washington Bridge post office was renamed the Sergeant Riayan A. Tejada Post Office in 2004, in honor of a Marine hero killed in Iraq.  It's located in Washington Heights, at the northern tip of Manhattan, in a primarily Dominican neighborhood.  (The Heights was the scene for a reality TV show that had a short run recently.) 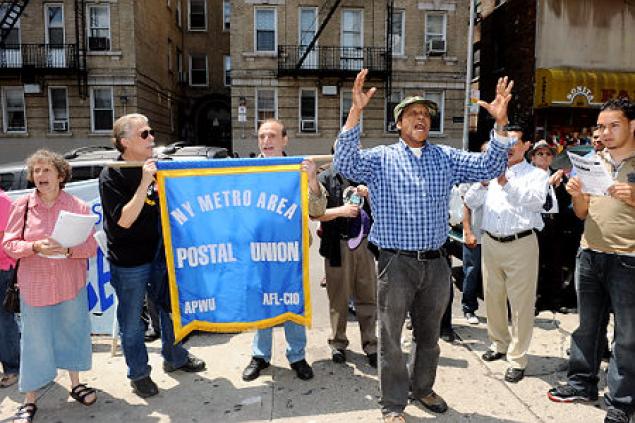 In July 2009, the Postal Service informed workers at the Washington Bridge station that the office would be closing because the landlord wanted a big rent increase.  Customers would need to go to another post office, like the 192nd Street post office, over twelve blocks further uptown.

That announcement met with strong protests from the community, and the post office remained open.  There was talk of a closure again in October 2009, but then a last-minute lease extension kept it open.

In April 2010, Congressman Charles Rangel met with Postmaster General John Potter to lobby on behalf of the post office, and Rangel was told that the Postal Service was working on another lease extension with the landlord and looking for a new, smaller location.

Nothing more seemed to happen after that, at least not in public view.  Behind the scenes, the Postal Service continued to arrange lease extensions, apparently with the help of elected officials.  One extension (May 2010 to June 2012) went into effect just after Rangel met with the PMG.  The current extension runs until June 30, 2013.

It looks as though the Postal Service found the new location for the Washington Bridge post office sometime in early 2012.  According to the USPS facilities list, a ten-year lease for the property at 516-518 181st Street went into effect on April 1, 2012.  The facility is identified as "Washington Bridge Retail."

Construction on the new space has apparently been going on for several months now.  The work should be completed in the near future, and the Postal Service will notify customers when it's ready to make the move.

For some reason, the Postal Service hasn't seemed very interested in saying much about the relocation.  For example, on January 28, 2013, a Daily News article about the potential closure of the Triborough Station in East Harlem happened to mention that "at least one other uptown post office could land on the chopping block.  The Washington Bridge Station, at 555 W. 180th St., is being considered as a possible candidate for consolidation or sale, USPS brass said.”

The brass knew then, however, that the Washington Bridge Station was not simply a "possible" candidate for closure.  They'd signed the lease on the new space ten months before, and construction work was probably going on at that very moment.

In fact, the new location is already listed on the USPS.com Find Locations page, where it's called "Washington Bridge Finance."  (The hours of operation are blank, of course, because it's not open yet.)

The Postal Service passed up another opportunity to inform people about the Washington Bridge relocation last month.  On March 21, 2013, USPS real estate specialist Joseph Mulvey gave a presentation to the Manhattan Borough Board about the agency's proposals to close the Old Chelsea, Peter Stuyvesant, and Triborough stations.  Mr. Mulvey did not mention the Washington Bridge Station.  Perhaps that's because the relocation is well past the "proposal" stage, or perhaps he just forgot about it.

The regs on a relocation

Whether the post office in Washington Heights turns out to be better or worse than the current one will be up to residents to decide.  They will probably be happy just to have a post office at all. 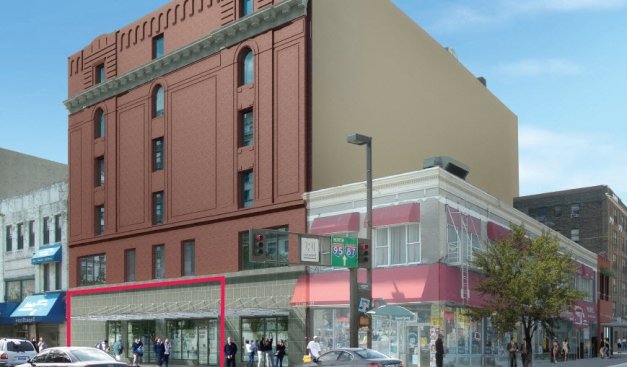 The problem is that the Postal Service does not seem to have gone through the formal procedures for a relocation as required by the Code of Federal Regulations.  According to CFR 241.4, the Postal Service is supposed to notify elected officials, post a notice at the post office, open a comment period, hold a public meeting, review the comments, issue a final decision, and provide an opportunity for appeal.  There's no record, at least in news reports, that the Postal Service ever went through this process.

The purpose of these relocation procedures "is to assure increased opportunities for members of the communities who may be affected by certain USPS facility projects, along with local officials, to convey their views concerning the contemplated project and have them considered prior to any final decision."

The Postal Service may think it's doing the community a favor by keeping a post office in Washington Heights, but it's also obligated to follow federal regulations.  Otherwise, the relocation is essentially illegal.  Not that anyone is likely to make a federal case out of it. 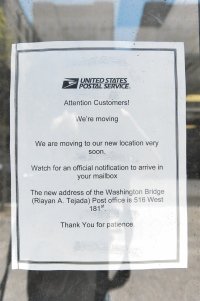 UPDATE: After this post appeared, two New York City news outlets followed up.  The Daily News' Doug Feiden talked to the Postal Service and was told that the agency had in fact followed federal regulations on the relocation.    DNAInfo New York's Nigel Chiwaya learned that the relocation caught a couple of local politicans off guard.  A notice was finally posted at the Washington Bridge post office about the impended relocation.