The mailers were probably disappointed that the Postal Service’s new 10-year plan released yesterday, “Delivering for America,” did not reveal how big of a rate increase the Postal Service intends to make using the new authority it was granted by the Postal Regulatory Commission. While they wait in suspense, here’s a guess: 3.6 percent.

We already know that the calculations the Postal Service submitted to the PRC in February indicate the hike could be as large as 5.56 percent (on top of the CPI increase), but the new system allows some of the rate authority to be banked for future years, so the increase could be smaller. And that is just what the following analysis suggests.

This analysis is based on two tables and a couple of comments that appear in the 10-year plan. The tables show revenue and expenses under two scenarios, a base case using the status quo and an alternative that uses the revenue and cost savings under the Delivering for America plan. The tables contain numbers for projected volumes and revenues over the next ten years that can be used to estimate what the Postal Service is planning for future price increases under the new rate authority.

The Base Case assumes rate increases at the current CPI cap, which has been about 2 percent over the past few years. Using these assumptions, one can calculate what the Postal Service is projecting for annual volumes for Market Dominant products.

If one assumes volumes over the next ten years turn out to be the same as in the base case (which is optimistic, since a rate increase may negatively impact volumes), one can calculate the average revenue per piece and the annual rate increases under both scenarios.

Here’s a table pulling these projections and estimates together. It uses the annual revenues as shown for both scenarios in the 10-year plan’s tables, the volume for FY20 as stated in the Revenue, Piece and Weight Report and for FY2030 as indicated by the 10-year plan, and a CPI of 2 percent. The other calculations are derived from these numbers. 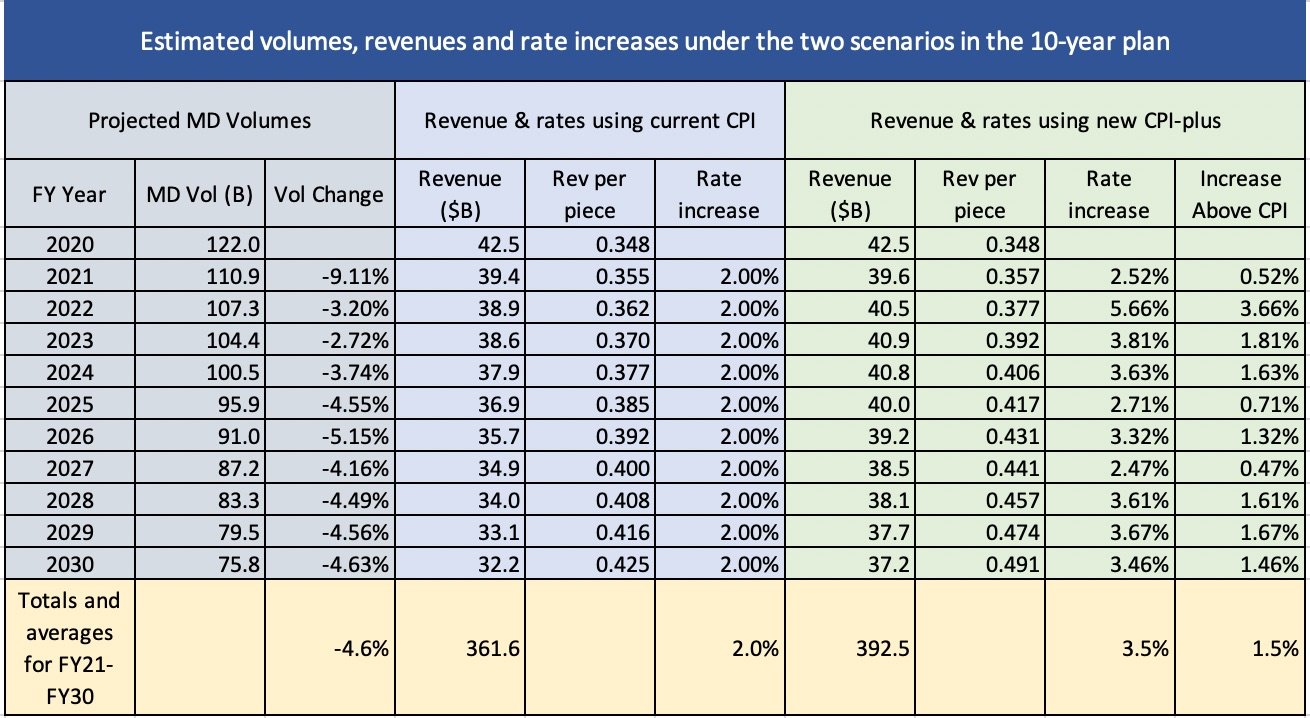 The Postal Service appears to expect annual volume declines of about 4.5 percent for Market Dominant products —  significantly more than the 3 percent declines of the past decade, but within reason.

The bottom line shows that under the Base Case over the next ten years revenues will total about 361.6 billion compared to 392.5 billion under the “Delivering for America” Case — a difference of about $31 billion.

A table in the 10-year plan (Figure 29, p. 47) says the revenue impact of implementing the new rate authority will range from $35 billion to $52 billion. It’s not clear how the Postal Service came up with these larger estimates, but they may be based on a lower rate of volume decline over the next ten years. If the declines returned to an average of 3 percent annually (as in the past decade) and the rate increases were the same as in the above table, the additional revenue generated by the plus-CPI increases would be about $47 billion. 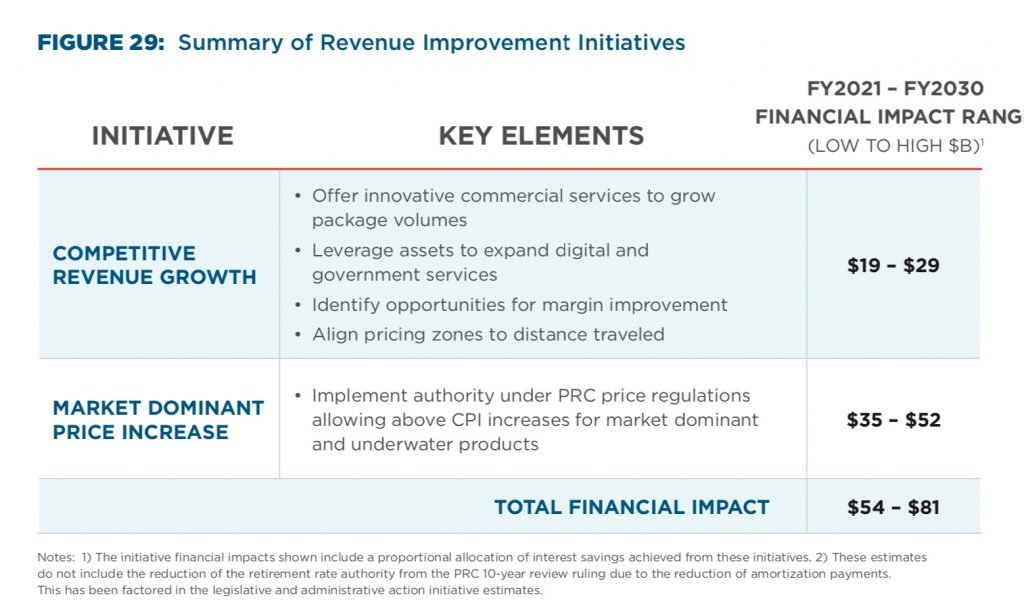 In any case, it appears that $30 billion is a conservative estimate for what the Postal Services sees the new rate authority bringing in.  Increasing Market Dominant revenues by this sum at the same time volumes are declining by about 4.6 percent a year would require rate increases averaging around 1.5 percent above a CPI of 2 percent.

Here’s how things might play out for the remainder of FY 2021 and for FY 2022.  Sometime over the next couple of weeks, the Postal Service announces a 3.6 percent rate increase, leaving 0.9 percent of the density-based rate authority (4.5 percent) banked for future use. The proposed increase needs to be approved by the Board of Governors and the PRC, and then there’s a 90 day notification period.

Let’s say the increase goes into effect as of August 1, 2021. During August and September (the last months of FY 2021), it would yield about $220 million in additional revenues. That’s just about the difference between the projections for FY 2021 in the Base Case ($39.4 billion ) and the “Delivering for America” case ($39.6 billion).

Let’s assume this increase remains in effect until January 2022, at which time the Postal Service uses some of its banked rate authority to add another 0.6 percent to the regular CPI increase of 2 percent. For the remainder of FY 2022, the additional rate authority would thus be 4.2 percent. For FY 2022, this would yield about $1.6 billion in additional revenues — the difference between the two scenarios ($38.9 and $40.5 billion).

This is all just speculation, of course.  The Postal Service should be announcing the new rate increase sometime soon, and the guessing game will be over.