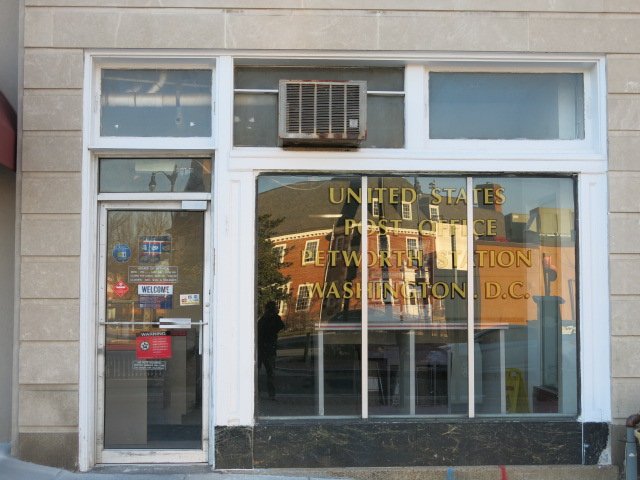 [Note: Please see the correction/update at the end of this story.]

The post office in Petworth, a community in Washington, DC, closed at the end of July.  The closing didn’t get much attention, but the story of what happened in Petworth is a useful case study of how the Postal Service has been conducting suspensions, closures, and relocations.

The Postal Service notified the community a month in advance that the Petworth Station at 4211 9th Street, NW, would be closing.  On June 26th, a notice was posted on the door of the post office saying, “The Postal Service will suspend service at this location effectively on July 28, 2015 due to the termination of our lease.”

The Postal Service often helps create a lease renewal problem and then uses it as an opportunity to close a post office, but in this case the landlord may have actually wanted the Postal Service to move out.  (A USPS Leased Facility report from 2012 says the landlord was the Praise Temple Church.)

As reported in a post on POPville, DC’s neighborhood blog, a clerk in the post office told a customer that “the District has signed a long lease to build a Community Outreach Center. They’re going to occupy the entire building and will open at the end of the year. The Post Office has to move sometime in the coming months but he doesn’t know where they’re going to go.”

The Postal Service thus knew in January —if not before — that the post office would have to move out “sometime in the coming months.”

In fact, the Postal Service probably knew exactly when.  As the Leased Facility report shows, the lease on the Petworth Station was due to end on July 31, 2015.  The Postal Service had good reason to believe that it would have to vacate the space by the end of July.

Now, it’s possible that something happened between January and June that led the Postal Service to believe it might be able to remain in the space.  Perhaps the District did not end up signing a lease to build a Community Outreach Center, or perhaps the center didn’t want the entire space.  A photo of the building in a June 30 article about the suspension shows a “For Lease” sign on the building.  Maybe there wasn’t a new tenant for the whole space and the post office could have remained.  But the photo is from Google Maps, so it’s not clear when it was taken.  The for-lease sign could date back to before the District signed the lease on the whole building.

In any case, the Postal Service probably had plenty of notice it would need to leave the location, and the situation did not really call for an emergency suspension.  It wasn’t much of an “emergency.”

When the Postal Service knows well in advance that it will be losing the lease, it is supposed to do one of two things — initiate a discontinuance procedure to close the post office permanently, or find a new location.  There is a set of regulations for both procedures, and it doesn’t look like the Postal Service followed either of them.

It may be understandable when postal officials out in the Hinterlands don’t always follow the regulations, but the Petworth post office was located less than four miles from USPS headquarters in L’Enfant Plaza.  Some of the people who work in HQ probably live in Petworth.

A meaningful opportunity for public input

The Petworth Station was one of several hundred stations and branches the Postal Service was looking to close back in 2009, but the plan fell apart and most of those offices remained open.  If the Postal Service intends to discontinue the Petworth post office, it should have been following the process described in the USPS discontinuance guide (Handbook PO-101).  In the section on emergency suspension, the guide states the following:

Wherever possible, when an initial feasibility study is to be initiated due to an emergency suspension, initiate the discontinuance process sufficiently in advance of the circumstance prompting the emergency suspension (for example, anticipated cancelation of a lease or rental agreement) to allow a meaningful opportunity for public input to be taken into account before services are suspended.

The Postal Service knew several months in advance that the lease would be canceled, but it did nothing to ensure there was “a meaningful opportunity for public input” before the suspension occurred.  There’s nothing on the Internet about a notice to the media about a discontinuance study, or a community meeting, or a public comment period, or any of the other policies outlined in the discontinuance guide to ensure the public has an opportuinty to have input.

The USPS guide goes on to say this:

This means that if the Postal Service somehow got caught off-guard about the lease termination in Petworth, it should now be following up with a discontinuance study or finding a new location, and it has ninety days after the suspension to do so.  In this case, that would be October 26, 2015.

Sometime over the next three weeks, then, the Postal Service should announce that it’s initiating a discontinuance study on the Petworth Station, or it should reopen an office in a new location in the neighborhood.  Most likely, neither will happen.

In July, about ten days after the Petworth Station closed, Congresswoman Eleanor Holmes Norton (D-DC), a senior member of the Oversight and Government Reform Committee — the committee that deals with the Postal Service as well as municipal affairs of the District of Columbia — issued a press release about the suspension.  It says that Norton contacted the DC Postmaster and was assured that the Postal Service was in fact looking for a new location in Petworth.  It reads as follows:

Norton has told the Postmaster’s office that it is critical that the U.S. Postal Service (USPS) open a replacement location as near the present location as possible….

“Convenient access to neighborhood post offices is necessary for our residents, but considering how USPS is in a struggle with competitors for business, a neighborhood-friendly location is also good for USPS,” Norton said.  “We appreciate the Postmaster’s assurance that they are looking to quickly open another location in Petworth. Our office will stay in touch.”

If it turns out that the Petworth Station is being relocated rather than discontinued, the Postal Service is supposed to be following 39 CFR 241.4, the federal regulations on the “expansion, relocation, and construction of post offices.”

These regulations, it may be noted, were revised by the Postal Service in 2014, shortly after a report by the USPS Office of Inspector criticized the Postal Service because “officials did not always efficiently manage the public notification and documentation process” and because “the process for relocating facilities was not always transparent.”

None of this appears to have happened in Petworth.  The Postal Service may eventually get around to following the relocation procedures, but it probably knew in January it would need to relocate.  There’s been plenty of time for a meeting and all the rest.  Why it became necessary to close the post office for an emergency suspension remains an open question.

The people in Petworth

There are obviously other post offices in DC that residents of Petworth can use, but the nearest to the Petworth Station is the Lammond-Riggs Station, about two miles away.  That may not seem like much, but it’s a considerable distance for city dwellers.  According to Google Maps, it’s a 17 minute walk, and even longer if you need to take the bus.

As the USPS Find Locations website shows, the people in Petworth can also buy stamps at a couple of CVS stores and a Wal-Mart — but only stamps — and there’s a contract postal unit in the area.

Despite the alternatives, Petworth seems like the kind of community that really needs a post office.  As described in a Washington Post article in 2011, the neighborhood is getting gentrified, with high-rise apartments, upscale markets, and changing demographics.

Those changes have boosted the economy, which probably means more mail.  There’s definitely a lot more e-commerce going on, which means more people have to pick up packages at the post office.  The Facebook page about the pending closure of Petworth Station has a comment about how long the lines always were at the post office.

Surely there are enough people in Petworth to merit a post office.  As Congresswoman Norton told the DC Postmaster, convenient access to a post office is necessary for residents and makes good business sense for the Postal Service.

It will be interesting to see if the Postal Service fulfills the DC Postmaster’s promise that a post office will quickly open in a new location in Petworth.  The post office closed over two months ago, and so far there are no signs of that happening anytime soon.

CORRECTION-UPDATE: It turns out that the Postal Service did in fact hold a community meeting about the relocation of Petworth Station.  It took place on September 30, 2015, four days before this article was posted.

In a letter to Muriel Bowser, the Mayor of DC, dated September 15, the Postal Service says that it wants to work closely with the community to find a suitable new location.  The letter cites 39 CFR 241.4 and reviews the steps the Postal Service will take to follow these regulations.

So the story may have a happy ending yet, and it’s good to see that rather than discontinuing Petworth Station, the Postal Service plans to find a new location.

It’s still not clear, however, why it became necessary to suspend Petworth Station in the first place and why the Postal Service waited until September 15 to initiate the relocation process, given that it apparently knew many months before that it would not be able to renew the lease.