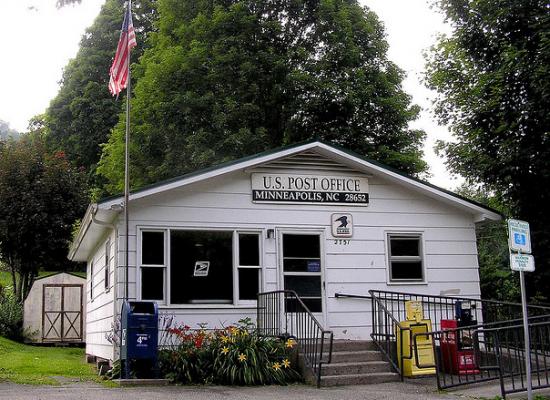 Yesterday, the Postal Regulatory Commission rejected three more appeals to save post offices — in Minneapolis, NC; Chillicothe, IA; and Pilot Grove, IA.  But the PRC finally ruled in favor of a community seeking to save its post office.  The ruling on Innis, Louisiana, “remands” the “Final Determination” to close the post office back to the Postal Service for further consideration.  That may or may not save the Innis post office, but it could be a sign that momentum is shifting at the PRC.  Aside from PRC Chairman Ruth Goldway, who has dissented on a few cases*, the Commissioners had shown few signs that they were prepared to reject a Postal Service decision to close a post office.

When the Postal Service issues a Final Determination to close an office, the community can appeal to the PRC.  The PRC can’t overturn the decision, but it can “remand” the decision and tell the Postal Service to take another look and provide more evidence if it wants to proceed with the closing.  Recently, the PRC has been very reluctant to exercise even this limited power.

While orders to remand were not uncommon back in the 1980s and 1990s, they've become rare over the past decade or so.  In 2000, there was the Roanoke, West Virginia decision; in 2006, the Observatory Finance Station (Pittsburgh, PA); in 2009, the decisions on Hacker Valley, WV and Cranberry, PA, both of which involved using improper "emergency suspension" procedures; and in 2010 there was the case of the suspended Rentiesville, Oklahoma post office, which actually closed in 1998.  That's about it for successful appeals since 2000.

Over the past few months, the PRC had ruled on some ten appeals, and in every case it either affirmed the decision, effectively closing the post office, or dismissed the case.  The causes for dismissals have varied.  In a couple of cases, it was because the Postal Service hadn’t definitively closed the post office yet, as in Still Pond MD, where the post office has been closed under an emergency suspension but not formally discontinued.  In a couple of cases, the Postal Service actually changed its mind and withdrew the Final Determination notice — more on that a little later.

For a while, it looked as if the PRC was going to affirm every closing decision, and one had to wonder, what would it take for the Commissioners to rule in favor of a community trying to save its post office? Chairman Goldway has dissented several times, arguing that the Postal Service’s case was flawed, but her fellow commissioners, aside from expressing reservations in a few concurring opinions, have shown few signs that they were ready to rule against the Postal Service.

Then yesterday the Postal Regulatory Commission remanded the decision to close the post office in Innis, Louisiana, back to the Postal Service.  The Innis decision may be a major breakthrough.  It’s worth taking a closer look at the case, since the ruling may help other communities craft their appeals cases.  It may also be a sign that the PRC is looking more critically at the Postal Service’s decision-making process, which bears not only on appeals cases but the Retail Access Optimization Initiative (RAOI).  The Advisory Opinion on the RAOI plan to close up to 3,650 post offices should be coming out in mid-December, hopefully before Christmas, as we learned yesterday in a public hearing held by the PRC.  (The podcast is here.)

The appeal also claimed the Postal Service’s estimate of cost savings was flawed.  Innis had been without a postmaster since 2008, and revenues were pretty low and declining over the past three years.  But the petitioners argued that the revenue declines were due at least partly to the fact that customers were taking their business elsewhere because of the “subpar performance” of the Office-in-Charge, who was eventually removed from the position.

According to the financial analysis, the Postal Service will save the employee salaries and benefits ($33,404) and annual rent ($2,400).  The Postal Service did not figure in additional costs for the carriers because they already cover the territory, nor did it consider the loss in revenue from post office boxes that don’t move to another post office.  The PRC observed that “the economic study should have included a more accurate analysis of the additional costs for rural delivery to the customers affected.”

Finally, the community proposed an alternate plan that involved closing two adjacent post offices in other communities, and the Postal Service seemed to like that idea, but then it was dropped with no explanation.  The PRC felt that “having recognized possible merit in the alternative,” the Postal Serviced should have offered “an explanation for rejecting that alternative.”

Overall, it’s not quite clear why the Innis appeal was much stronger than many others that the PRC has rejected, like the appeal for the post office in Gwynedd, Pennsylvania, and Akron, Ohion.    But it’s a welcome sign that the tide may be turning at the PRC, at least a little.

It wasn’t all good news at the PRC yesterday.  The Commissioners affirmed the Postal Service’s decision to close the post offices in Minneapolis, North Carolina; Chillicothe, Iowa; and Pilot Grove, Iowa.  Those post offices will now close, although it’s not clear if they will benefit by the suspension on closings that goes into effect on Friday of this week, which would at least keep them open through the holidays.

The vast majority of appeals are still open cases, and their number just keeps increasing in a totally unprecedented fashion.  Here are some materials on the history of appeals:

Since the first of the year, there have been about 178 appeals filed — 75 of them since October 1.  About 600 post offices have received a Final Determination (or been closed) this year, so that’s about a 30% rate.  The pile of appeals is just going to build, particularly when the Postal Service begins issuing final determination notices on the RAOI post offices, which could start happening any day now.  (The suspension of closings does not apply to issuing Final Determination notices.)  The PRC has a lot of work to do.

As noted above, the Postal Service has withdrawn a Final Determination in at least a couple of curious cases.  Back in July, the Postal Service suddenly withdrew its Final Determination notice to close the post office in La Mesa, California, and the PRC then dismissed the case.  In August, the same thing happened with the post office in East Camden, Arkansas.  The Postal Service is not under any obligation to explain why it reversed its decision on the closing, so we don’t know what factor or factors led it to change its mind in these cases.

Which raises the question: What makes the Postal Service decide not to close a post office that it has previously targeted?

In its hearings on the RAOI for the Advisory Opinion, the PRC has been asking the Postal Service just that, ever since August, when 25 Alaska post offices were removed from the list after a meeting between the USPS District Manager for Alaska and Senator Begich of Alaska (PRC transcript, p. 252).  In cross-examination of James Boldt just a few weeks ago, Chairman Goldway and the Public Representative continued to press Boldt for an explanation of what it would take for a post office to be removed from the RAOI list.  They didn’t get much of an answer, and for a good reason — the Postal Service doesn’t want to provide clues that would help communities fight off a closing.

Something like a couple of hundred post offices have been removed from the original RAOI list of 3,650, but the Postal Service won’t say why.  For some, like those in Alaska, the explanation must be the remote location and the long distance to another post office.  But it’s unclear when other factors may have played a role in many of these reversals — financial considerations, a strong protest by local citizens, lobbying by elected officials, or what?

* Goldway issued dissents on the PRC ruling to affirm closings in East Akron, Ohio and Fort Smith, Arkansas.  See also Pimmit, Virginia, where Goldway dissented from the ruling not to suspend the closing while the appeal was heard, as she did in the case of Freehold, New Jersey.  When the PRC subsequently affirmed the closing of Freehold, Goldway issued a concurring opinion with reservations.  Note, too, the concurring opinion with reservations issued by Commissioner Langley in the case of the Pilot Grove, Iowa, post office, earlier this week.