The five-month moratorium on closing post offices and processing plants was the big news of the week, but that's not all that happened in postal world.  Here's a roundup of some of the week's news:

Occupy Oregon’s post offices: Yesterday, seventeen Oregon communities protested the Postal Service’s plan to close rural post offices across the state.  According to the Rural Organizing Project, the Occupiers carried Christmas cards, cookies and gifts of appreciation to their postal workers, as they sought to raise awareness about the impending closures and collect petition signatures.  Craig Frasier from Columbia County Citizens for Human Dignity explained the protest: “The Occupy movement means advocating for the 99%.  Rural and small-town Oregonians who are economically vulnerable rely on the post office for basic needs like getting prescription medications.  As a public service, the post office prioritizes getting the job done over turning a profit.  We all must take an interest in protecting it.”

Breaking up is expensive to do: Yesterday, AT&T gave up on its $39 billion acquisition of T-Mobile USA.  As a result, AT&T will pay a huge breakup fee to T-Mobile’s owner, Deutsche Telekom AG, for failing to complete the deal — $3 billion in cash and some of its wireless spectrum as well.  One of the seven banks advising AT&T was Evercore, the investment-banking firm founded by Roger Altman.  With the collapse of the deal, Evercore will get paid significantly less than the $18 million to $36 million it stood to make, but considering the whopping breakup fee, any payment is probably too much.  If you’re wondering what this has to do with postal world, the Postal Service recently hired a top banking firm to help “review and advise” the agency on "restructuring."  The name of the firm?  Evercore.

A moratorium — but not for all: The Postal Service's moratorium on closing post offices and processing plants until May 15  won’t stop many closings from proceeding as planned.  In a “pleading” before the PRC, the Postal Service says the moratorium does not apply to every post office, and it “will proceed with the discontinuance process for any Post Office in which a Final Determination was already posted as of December 12, 2011, including all pending appeals.  The Postal Service, however, will take the final step of closing a Post Office prior to May 16, 2012, only when that Post Office was not in operation on, and the Final Determination was posted as of, December 12, 2011.”

It’s hard to say how many post offices fall into this category.  There are about 180 appeals still before the PRC, and a few of these post offices were “not in operation” on December 12 — like the post office in Pimmit, Virginia — so if the appeal is unsuccessful, these will be formally and finally closed during the moratorium.  There are probably others that closed for an emergency suspension and then received a final determination, so they too can close.  And the Postal Service has said nothing about more emergency suspensions occurring, so we can expect to see some of these as well, especially now that the Postal Service is pushing for lower rents and easy-termination clauses that many lessors won’t agree to.  Look for a couple of dozen post offices to close during the moratorium.

Confusing and unfair: The issue of closing post offices while the moratorium is in effect seems to be troubling the chairman of the Postal Regulatory Commission, Ruth Goldway.  The PRC issued rulings on four appeals this week.  Three affirmed the Postal Service’s decision to close the post offices — in Fishers Landing, New York; Pinehurst, North Carolina; and West Elkton, Ohio — and one — Enloe, Texas —remanded the case back to the Postal Service for further consideration.

Chairman Goldway dissented on all three of the decisions to affirm the closing, and Commissioner Langley joined her on the Fishers Landing case.  Goldway noted various problems in the three cases —  issues over how the Postal Service calculated cost savings, for example — but the moratorium figured into her decision on Fishers Landing:

“It is confusing and perhaps unfair to require some citizens whose post offices have received a discontinuance notice as of December 12, 2011 to gather evidence and pursue an appeal to the Commission, while others whose post offices were in the review process but had not yet received a discontinuance notice by December 12, 2011 have the respite of a five month moratorium.” 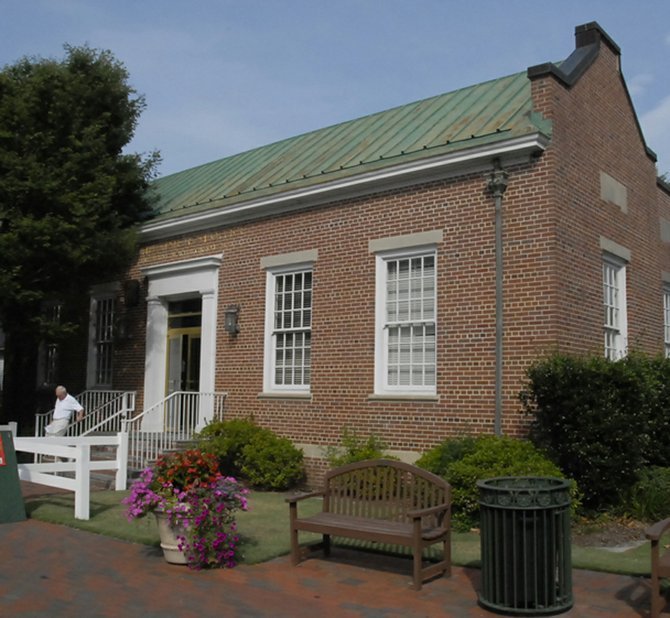 In the Pinehurst decision, Chairman Goldway wrote a lengthy dissenting opinion that cited several problems with the Postal Service’s case, including failure to adequately consider the closings effect on local businesses and on the historic character of the community.  The Pinehurst post office was built in 1935 by the New Deal.  The town, a well-to-do community planned by Frederick Law Olmsted, designer of New York’s Central Park, and famous for its golf courses, considered buying the building and renting space back to keep the post office, but the Postal Service doesn’t seem interested, and private businesses are working on a deal. 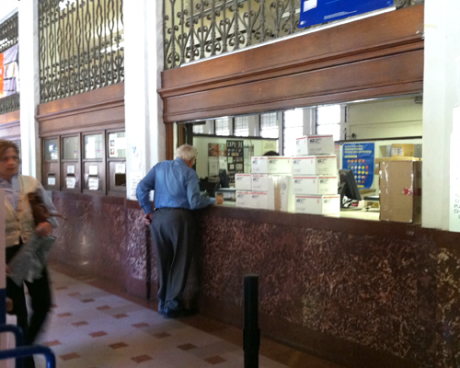 History on the market: The historic post office in Palo Alto, California, is for sale.  Since the Postal Service plans to move the post office to a smaller retail space, that’s considered a “relocation,” not a closing, so there’s no need to go through a full discontinuance process.  The same thing is happening in Venice, California, and residents there have filed an appeal with the PRC to save their New Deal post office.  The Postal Service says the PRC has no jurisdiction in such cases, but the case has not been decided, and its implications for Palo Alto, not yet clear.

The Palo Alto post office is a real gem ((photo at the top).  Built in 1932 in the last days of the Hoover administration, it was designed by architect Birge M. Clark, whose father was a friend of the president.  When the Postmaster General saw Clark’s designs for a post office in the Spanish Colonial style, he pushed them away, saying, ‘Don’t you know what a U.S. post office looks like?”  Clark calmly replied that the President and First Lady had already approved the design over breakfast that morning.  The Postmaster quickly approved the blueprints.  Maybe the current Postmaster General will have a similar change of heart, and save the Palo Alto post office.  (More on the story here.) 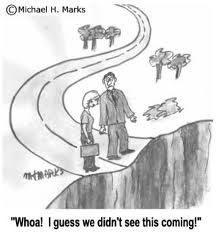 RAOI — unclear, inconsistent, needs improvement: The Advisory Opinion on the Retail Access Optimization Initiative (RAOI) will be issued any day now, but in the meantime, the USPS Office of Inspector General (OIG) has already issued a report criticizing the initiative.  Entitled “Postal Service-Operated Retail Facilities Discontinuance Program,” the audit report identifies several problems with the RAOI.  A random sampling of the 3,652 post offices on the RAOI list revealed that many did not meet the criteria that put them on the list.  For example, 63 of the 93 post offices (68%) in the category of “offices earning less than $1 million in annual revenue and have five or more access points within a half mile” did not have that many access points.

Beyond such details, however, the OIG report says the Postal Service “should develop a business plan to clearly define the organization’s strategy to close approximately one-half of its Postal Service operated retail facilities over the next several years.”  That plan should clarify what specific changes will be made, how long it will take to make them, and what the anticipated benefits are.

Amazing, isn’t it, that the Postal Service would begin to close half the country’s post offices and still not have in place an “integrated strategy” and “economic model” about what it’s up to, and why.

“The good fight” goes international: Saving the post office is getting international attention.  Yours truly of “Save the Post Office” was interviewed for an article in Neue Zürcher Zeitung, Switzerland´s biggest and oldest paper.  Most of the interview got cut, but there’s still a quote, though you’ll need to know German to make it out.

Phil Rubio, former postal worker and author of There's Always Work at the Post Office, has an excellent piece in the UK’s Guardian entitled “Who will deliver the US postal service from destruction?” “Don't blame the internet,” says Rubio.  “The USPS is the victim of an invented crisis.”

And finally, best for last, Evan Kalish of “Going Postal,” is becoming an international celebrity.  This week he was featured in a terrific TV spot on BBC, and there’s more to come.  Stay tuned.