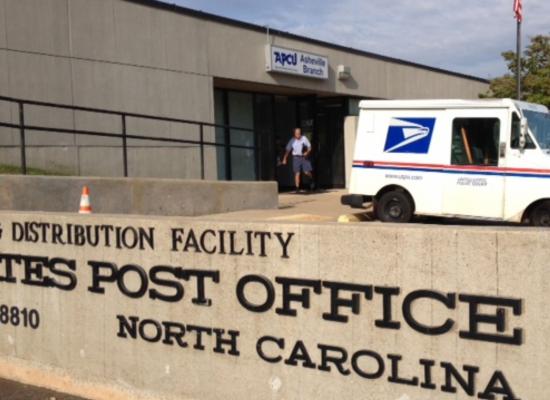 It's business as usual at the Washington Post.  Just as it has done many times over the past few years, the Post's editorial staff is calling for more cuts to postal services and more downsizing of the infrastructure, all in the name of "reform."

Today's Post has an editorial entitled "Delivering a solvent Postal Service, the bipartisan way."  The Post endorses the Carper-Coburn bill and its mandate to close facilities and cut services, and then blames “interest-group politics” for opposing these much-needed reforms.  According to the Post, it's postal unions, rural states, and large-scale commercial mailers who are “furiously” trying to protect “the dysfunctional status quo.”

Not surprisingly, the Post expresses support for the Postal Service’s plan to close 82 more mail processing plants over the coming months.  To make its case, the Post describes these plants as “inefficient mail-processing facilities.”  But the Post provides no evidence for why these plants are “inefficient.”

There’s actually a considerable amount of evidence showing that it would be more efficient for the Postal Service to maintain these plants rather than close them.

When the Postal Regulatory Commission did an Advisory Opinion in 2012 analyzing the Postal Service’s Network Rationalization plan to close about 260 plants, the Commission concluded that it would be more efficient if only some of the plants were closed.  After an exhaustive analysis conducted by the PRC staff and outside experts, the Commission found that closing some plants would be beneficial.  Closing all of the plants on the list, however, would be counter-productive because it would necessitate ending overnight delivery for almost all First-Class mail, which in turn could cause a considerable amount of damage in terms of lost revenue.

How deep the losses would be was hard to say, however, because the market research done on the question was so problematic.  The Postal Service commissioned a market research survey that showed that mail volumes would decline precipitously if the mail were slowed down as proposed.  The losses would be so significant, in fact, that the closures could end up losing money in the end.  The Postal Service buried the survey and commissioned a second survey, which produced more palatable results.

In reviewing the two surveys, the PRC could not come up with a reasonable estimate for how much the plan would save.  If everything went perfectly, the consolidations could save over $2 billion a year, as the Postal Service was claiming, but the plan could also end up breaking even or even losing a half billion dollars a year.  In the worst-case scenario, it might even end up losing almost $1.5 billion a year.  (For more on the numbers, see this previous post.)

By the way, in a related news article in today’s Post, we learn that “the next round of closures is expected to save $750 annually, according to USPS estimates.”  That’s obviously supposed to read "$750 million annually," but considering what one learns from that secret market research survey and the PRC’s Advisory Opinion, $750 might be closer to the truth.

The Post’s characterization of the 82 processing plants as “inefficient” is problematic for another reason.  The experts who participated in the PRC’s Advisory Opinion presented a mountain of evidence showing consolidating facilities into larger facilities is not always more efficient.  Sometimes smaller is better.

The Commission sponsored two witnesses to analyze the consolidations — William Weed and Harold J. Matz, both of whom worked many years at the Postal Service before becoming independent consultants.   Weed and Matz looked at historical patterns in processing facilities and found that larger plants tend to be less efficient than smaller plants.  They observed that with the shift to larger plants under the consolidation plan, productivities could decrease or be much less than the Postal Service was projecting.  As a result, the cost-savings could also be much less than anticipated.

In other words, those 82 processing plants are not so “inefficient” at all.  In order to close them, the Postal Service is going to have to slow down more mail, just as it had to do for the phase-one consolidations and also for the Load Leveling plan.   There's nothing very efficient about that.

The WaPo op-ed piece also gets something else wrong.  It advocates the use of more cost-effective “curbside multi-residence mailboxes.”  But the Post is mixing up two types of delivery.

Curbside mailboxes are the individual boxes you see on the curb of single-family homes, usually in the suburbs and rural areas.  By “multi-residence mailboxes,” the Post is referring to the centralized cluster box units typically found at apartment and condo complexes.

But the Carper-Coburn proposal — like Issa’s bill in the House — is about converting millions of single-family homes that currently get delivery to the door or to the curb over to a cluster box unit.   This CBU won’t be “curbside” at all.  It will be located a block or two away, which can be hard on seniors and the disabled, lead to security problems (thieves breaking into the boxes), and alienate a lot of customers.  Even the Postal Service doesn't much like the idea.

And finally, just to make sure that its editorial remains true to form, the Post can’t resist invoking the usual scare tactic — the notion that without reform the Postal Service is heading for "a taxpayer bailout."

But you won’t read that in today’s editorial.  It just doesn’t fit the Post’s narrative about the “dysfunctional status quo.”