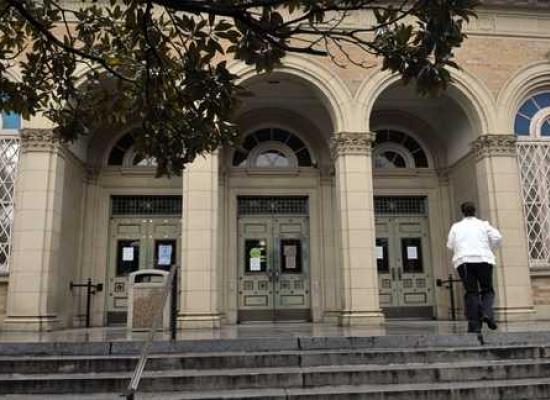 The post office on 1125 I Street in Modesto, California, closed on June 3, 2011, and it’s been up for auction since June 9th.  The bidding ends in a few hours, on Aug. 4 at 5:41 p.m. central time.  Whoever wins this auction, we’re all going to come out losers.  The Modesto post office is a national treasure, and it’s a crime that the government has seen fit to sell it off.

So far there have been four bidders, and as of early this morning, the going price is $650,000.   (The bidding deadline keeps getting extended, so check for Updates at the end of this post.)  There may be a flurry of last-minute bidding, but if the price is anything like this, that only makes the crime worse.  Similar post offices in Palm Beach, Florida, and Westport, Connecticut, have sold for over $3 million.  You can follow the bidding today to its sad final moment on the website of the GSA auctions page—it’s featured in the slide show at the top.

Also known as the Modesto Federal Building and the El Viejo, the building was always occupied by a post office, but in 1967 work on a new postal facility was completed and downtown Modesto was demoted from a main post office to station status.  Workers were transferred to the new facility, leaving behind only a small retail operation.  Other agencies, like the IRS, occupied the empty space, and custody of the building transferred from the Office of the Post Office to the General Services Administration in 1968.  It’s the GSA that’s conducting today’s auction.

The post office contains nine original wall murals in the lobby, commissioned by the Treasury Relief Arts Project. The oil paintings were done in 1937 by Ray Boynton, with the assistance of several local artists, and they depict agricultural scenes: plowing, sorting and harvesting grapes; irrigating orchards; meat and cheese packing; grain harvesting and feeding cows.

In 1989, the GSA commissioned an historic structures study, apparently with the intention of restoring the building.  At almost 100 pages, the report contains a wealth of information.  Planning on the building began in 1913, a site was purchased in 1916, an appropriations bills to pay for it was defeated in Congress in 1919, a subsequent appropriation bill was approved in 1930, and it was finally completed in 1933.

Its design and construction were supervised by James Wetmore, Acting Supervising Architect for the Treasury Department.  Wetmore gets the official credit for designing hundreds of public buildings in the 1930s, although there are only a few of them in California. The post office was the first civil federal structured erected in Modesto.

As the historic structure report states, “The Modesto Federal Building’s architectural significance and generally excellent condition demand a sensitive approach to the conservation of its remaining building fabric.  At the same time, it must be realized that the building will continue to function as an active public building.”

Unfortunately, the report got that wrong.  It’s unlikely that the El Viejo is going to remain an active public building.  Non-profit groups, working through county officials, did express interest in buying the building, but the GSA decided to auction it to the highest bidder.  It will probably turn into a real estate office (as in Palm Beach) or a clothing store (as in Greenwich CT).

The application to the National Register of Historic Places states that the building “displays a refinement of design and commitment to classical principles unmatched in Modesto.  For this reason, and given the building’s heavy business and social use, the Federal Building stands out as a local landmark—a visual anchor for the neighborhood and a prominent architectural feature for the city….  As the first federal building erected in the city, it was a source of pride for Modestans and a locally prominent symbol of the federal government.”

That’s the saddest part of the whole story.  The federal government built thousands of beautiful buildings during the early decades of the 20th century as part of the City Beautiful movement, and the New Deal put up over 1,100 during the depths of the Depression.  These buildings were intended to be a source of pride and they symbolized the power and prestige of the federal government.

What does it say when these buildings are treated like disposable real estate, sold off cheap to the highest bidder, with no regard to the future use of the building?  What kind of message does it send out about the power and prestige of the federal government these days?

One final note.  On Tuesday the Guardian newspaper in Great Britain published a great article about the Modesto post office written by Gray Brechin, a geographer at the University of California, Berkeley, where he is the Project Scholar for California's Living New Deal Project.  Yesterday, yours truly was interviewed by the French newspaper, Liberation, about the selling of New Deal post offices.

But in the American press, there’s been hardly a word about the loss of these historic post offices.  Fifteen of them have recently been put up for sale, and there are 35, as well as several pre-1933 buildings, on the closure lists released last week by the Postal Service.  Why are the French and British more concerned about our cultural treasures than we are?

The El Viejo post office is being stolen from the American people.  You don’t need to live in Modesto to be outraged.