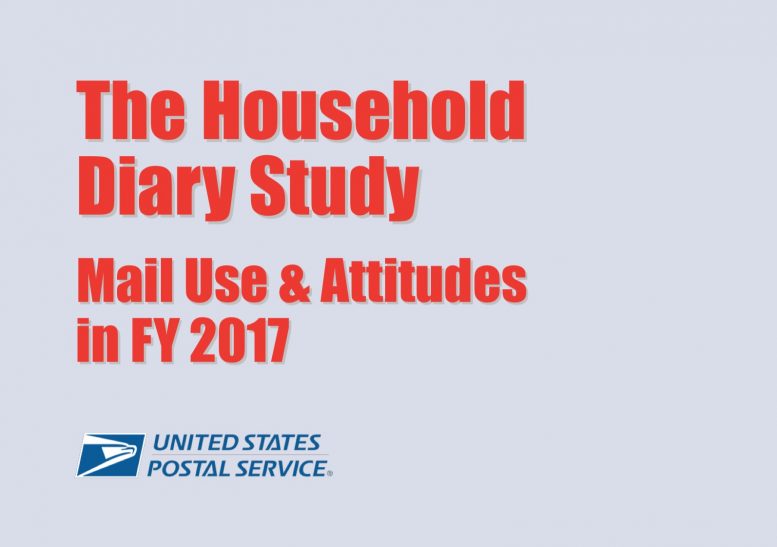 Last week the Postal Service released the 2017 Household Diary Study.  The study contains a wealth of information about household use of the mail and how that use changes over time. The survey collects household information on volumes of mail sent and received, attitudes toward mail and advertising, bill payment behavior, and use of the Internet and other information technologies.

One brief section of the survey contains information about how often people visit the post office. According to the survey results, “in spite of a declining frequency of visits over the past several years, the use of post offices for mailing services continues to dominate the mail service industry. Fifty one percent of all U.S. households patronize a post office at least once a month, while just 12 percent visit a private mailing company. Over 21 percent of all households in the U.S. visit the post office three or more times a month.”

Here’s a chart from the Study comparing visits to the post office in 2009 versus 2017.  As the chart suggests, visits appear to be down somewhat, but not nearly down as much as mail volumes overall.

In addition to the Household Diary Study numbers on visits to the post office, the Postal Service regularly provides the number of actual transactions that took place on those visits. According to Postal Facts, there were 857 million visits in 2017, compared to 1.12 billion in 2009.

Last year the USPS Office of Inspector General released its own study of visits to the post office. The IG recognized that not all visits involved a recorded transaction, so the Postal Service’s number on visits could be way off.  The IG estimated that annual foot traffic was 2.7 billion visits in FY 2016 — about triple the Postal Service’s official statistic.

Rather than simply counting transactions, the IG developed a methodology that “combined Postal Service data on transactions and occupied PO Boxes, survey-based estimates of actions taken in post offices, and assumptions about how those figures translate into foot traffic.”  The IG also tested the model installing people-counting devices in 32 large post offices in the Northern Virginia District.  Its estimate of 2.7 billion is probably accurate.

The Household Diary Study also has some interesting data about Internet access.  The Study found that 89 percent of households have Internet access (either Broadband or Dial-up), with levels varying according to wealth and age.