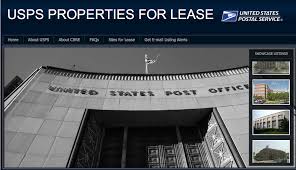 The Postal Service and its real estate broker CBRE have created a new website advertising postal properties for lease.  It’s the companion site to the USPS-CBRE Properties for Sale website, which went up in November 2011.  The domain name for the new site was registered in April 2013, but the site may have gone online just in the past few weeks.

The Properties for Lease site currently lists 82 postal facilities, most of them post offices.  The listings indicate the total square footage of the building and the vacant square footage available for leasing; in some cases, there are a few more details, like what floor the space is on or what it might be suitable for (office, retail, etc.).  It would appear that the Postal Service plans to maintain a retail postal operation in the building and to lease out the area that isn’t being used (like the space in the back where carriers used to work).

Thirty-three of the 82 listings are historic post office buildings; at least five are on the National Register of Historic Places.  The new website may be an indication that the Postal Service is shifting strategies.  Instead of selling historic post offices — a source of much controversy across the country — it has decided to lease out the extra space.  The Postal Service often leases space in its properties, but it’s possible that the Properties for Lease website represents a new approach to the question of what to do with facilities with excess space, especially historic post offices.

The Postal Service has been using the existence of excess space as an explanation for why it wants to sell off post office buildings.  Time after time, the Postal Service has said that mail volumes are falling, the building is too large, there’s too much space not being used, and a small retail outlet would suffice.

When communities have asked why not just lease out the extra space rather than selling the building, the Postal Service has not seemed very responsive.  Bringing in the fast cash from a sale has seemed preferable to holding on to a historic landmark building.  But there are many reasons why leasing would be a better idea.

One reason is that there is a federal regulation (41 CFR 102-73.20) that requires government agencies to “extend priority consideration to available space in buildings under the custody and control” of the Postal Service.  In other words, as a matter of law, federal agencies should be looking at post offices for office space.

Leasing space is also encouraged by a Memorandum of Agreement between the Postal Service and the GSA, which supports an executive order that directs federal agencies to locate their facilities in business districts and urban areas.  Under this agreement the Postal Service should be offering its excess space to the GSA.

Along similar lines, a 2012 GAO report recommended that the Postal Service do more to make its excess space available to other federal agencies.  In its response to the GAO, the Postal Service stated, “In situations where USPS has identified underutilized space, we are actively and aggressively pursuing third party tenants where deemed appropriate by engaging CBRE, a National Real Estate Services Provider.”

The new Properties for Lease website is the first sign that CBRE and the Postal Service are in fact aggressively seeking tenants.  Until now, there has not been much indication that any effort has been expended to lease out the extra space in the historic post office buildings being sold.  Coast to coast, from the Bronx and Chelsea in New York City to Venice, La Jolla, Ukiah, Redlands, and Berkeley in California, the Postal Service has decided that it will sell the building without looking at alternatives.

The controversy over these sales recently prompted the USPS OIG to post a piece on its blog entitled “Mail Business, Real Estate Business, or Both?”  The OIG asks: Should the Postal Service generate revenue by leasing space in its buildings to other businesses, or should it just sell the buildings and lease space for post offices?

If the Postal Service has now decided that leasing out the excess space may be a viable alternative to selling the building, it raises several questions: Why have the postal facilities on the Properties for Lease website been chosen for leasing?  Were they once on a list for potential sale, and was there was a change in plans?  Why proceed with the controversial sale of other historic post offices rather than leasing out their extra space?

A couple of the listings are also worth noting.  The post office in Eugene, Oregon, has been for sale since 2010.  Now the Postal Service is listing the vacant space in the building.  Does that it mean it has dropped plans to sell the building?

Similarly, the Frank L. Lautenberg Post Office and Courthouse in downtown Newark, which currently rents space to the GSA, is listed on Properties for Lease with vacant space for rent.  Does this mean that the plan to sell the building to the GSA has been scuttled?

Those familiar with the individual post offices on the new USPS-CBRE website well probably have other questions as well.  If you know more about any of these post offices, let us know and we’ll follow up.