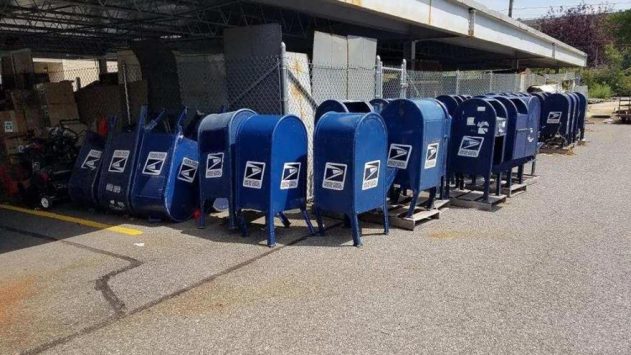 In the run-up to the election in November 2020, the iconic USPS blue boxes suddenly became controversial. It appeared that the Postal Service was removing a lot of collection boxes just when they would be needed most — to handle all the ballots being sent by mail due to the pandemic. Images of trucks carting away blue boxes went viral. People feared the removals were part of a plan to sabotage the election.

The Postal Service said the removals were just business as usual — the routine culling of underperforming boxes. As the Postal Operations Manual explains, collection boxes are regularly examined for volume, usually once a year over a two-week period. To justify its location, a collection box must average 25 pieces a day. Boxes failing the test may be relocated to a potentially higher volume location or taken out of service. (There’s more background on box removals here.)

On August 18, 2020, under pressure from Congress and several lawsuits, the Postal Service announced that it would not remove any more boxes until after the election.

A few days later, Postmaster General DeJoy testified at hearings in the House and Senate. On August 21, he told the Senate that removing collection boxes was “routine” and a “normal process that has been around for 50 years.” Due to all the “excitement,” however, he promised to postpone further removals.

During these hearings, the Postmaster General did not reveal that just a few weeks earlier, in late June and early July, he and his leadership team had held meetings about a plan to save billions of dollars by cutting 64 million workhours through a variety of initiatives, such as eliminating overtime and reducing hours at post offices. Details about this “Do It Now” plan, including slide presentations given at the meetings, were made public as evidence submitted in lawsuits against the Postal Service, including Pennsylvania v DeJoy and New York v Trump. (Three of the presentations can be found at the end of this post.) 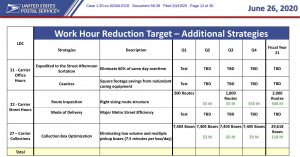 A presentation at a meeting at postal headquarters on June 26, 2020, shows that the workhour reduction plan called for removing 30,000 “low volume and multiple pickup boxes” — 7,405 per fiscal quarter.  The Postal Service projected that this “Collection Box Optimization” plan would allow it to cut carrier time by 7.5 minutes per day per box for a total savings of $18 million in FY 2021. (The slide doesn’t show the projected savings for FY 2022, after all 30,000 boxes were removed, but the annual savings would be $48 million, about $1,600 per box.)

According to an OIG report about the workhour reduction plan, “From FY 2015 through August 31, 2020, the Postal Service removed 15,779 collection boxes” — an average of about 2,630 removals a year. At that rate, removing 30,000 boxes — over 20 percent of the country’s 140,000 boxes — would take nearly twelve years. Had the optimization plan been implemented, this would have happened in just twelve months.

It’s possible that the removals that caused so much alarm in August 2020 were anything but “routine” and in fact represented the beginning of the large-scale “optimization” plan.

On August 20, 2020, amidst the furor over box removals, Robert Bracco, an individual using the muckrock.com FOIA request website, filed a request asking the Postal Service to provide data “pertaining to the existence, addition, removal, or relocation of USPS collection boxes inside the United States and territories created or altered after 8/15/2019.”

On March 25, 2022 — nineteen months after the request was filed, and after seventeen follow-up messages inquiring on the status of the request — the Postal Service finally responded. It provided three lists of collection box locations in service in December 2019, 2020 and 2021. The lists make it possible to track additions and removals over this two-year period.

The Postal Service hasn’t commented on the existence of the plan to remove 30,000 boxes. As postal officials told the OIG, “the collection box removals made in 2020 were part of a long-standing process and handled no differently than in previous years.”

The Postal Service also hasn’t explained why it slowed the pace of removals in 2021. Perhaps postal leaders decided that generating more controversy over collection boxes just wasn’t worth the cost-savings, especially at a time when postal reform legislation was in the works and the Postmaster General continued to be under fire, for one reason or another.

What the lists show

In many instances the lists show duplicate addresses. That’s because at many locations, like outside a busy post office, there may be two, three, even four boxes. Out of the 140,000 or so boxes nationwide, about 14,000 are at these multiple-box locations. (I haven’t done a count, but it looks like about 9.000 locations have two boxes and 2,000 have three or four.) Most of the removals occurred at locations where there was only the one box, but some took place where there were multiple boxes, leaving at least one box at that location.

The FOIA lists also show that that the Postal Service added hundreds of locations each year (relocating boxes that were underperforming elsewhere), so it’s important to distinguish between removals and net decreases.

It may be worth noting in this regard that the Postal Service is supposed to report to the PRC not only the number of boxes in service at the beginning and end of the fiscal year but also the number of boxes added and removed (39 C.F.R. § 3055.91(c)).  The Postal Service has been reporting only the start and end numbers for each year, not the added and removed numbers, but for some reason the Commission has not asked for these other numbers, nor has it asked for the kind of detailed lists that Mr. Bracco requested. (See ACD Report, p. 212-214.)

In any case, the FOIA lists enable one to determine not only the total numbers for boxes added and removed but also the exact locations where the changes took place.

Here’s a chart summarizing the numbers derived from the FOIA lists.

A spreadsheet showing the three FOIA lists, along with the lists of additions and removals derived from those lists, is here. You can download the original FOIA lists here. A list of the 2,500 locations where the box was removed leaving no box in place is here (you can sort and filter by state, zip, etc.).

Here’s a map showing the locations where 2,500 boxes were removed with no box remaining, with the markers in blue indicating those removed during 2020 and green for those removed in 2021. (If you click on a marker and then click on the “right-turn” sign next to the address, it will go to a map of the location; if you zoom in, go to street views and look around, you might find the box before it was removed — unless it was removed before the street view image was taken.)

Here’s a map showing the locations where 1,129 boxes were added, with the markers in yellow indicating those added during 2020 and purple for those added in 2021.

By the way, if you’re looking for a collection box near you, the USPS Locator website will direct you to boxes in service, along with their collection times, for any zip code or address. Just limit your “collection type” to “Collection Boxes.”