When the Postal Service sold two historic post offices in Connecticut, there was probably a general sense that they would be protected by preservation laws.  But over the past few weeks, the post offices in Fairfield and Greenwich have been totally gutted, and a good portion of the Fairfield exterior has been destroyed as well.  About all that will remain of these two structures is the shell.

Maybe there wasn’t much worth preserving inside these buildings, but it still comes as a shock to see pictures like those in the slideshow.  Apparently all that matters of history is the facade.

The post office in Greenwich was built in 1917, and it served the community for 95 years.  In May 2012, the building was sold for $15 million to Peter Malkin, a Greenwich resident who also happens to own the Empire State Building.  Mr. Malkin is a trustee emeritus of the National Trust for Historic Preservation, and he apparently has a reputation for saving historic buildings.

When Malkin emerged as the buyer of the Greenwich post office back in May 2011, local officials said they were told the property would be rented by the high-end retailer Bergdorf Goodman.  That deal fell through or it was a false rumor to begin with.  The new tenant will be Restoration Hardware, a luxury brand in home furnishings.

Restoration Hardware describes itself as “a curator of the finest historical design the world has to offer,” so it is rather ironic that the “restoration” of the Greenwich post office has required a total gutting of the structure’s interior.

While the old Greenwich post office gets repurposed as a high-end retailer, the new post office in town is housed in a building that used to be a pet food store, for which the Postal Service pays over $21,000 a month in rent.  As Evan Kalish observed on his website Going Postal, the two buildings make quite a contrast. 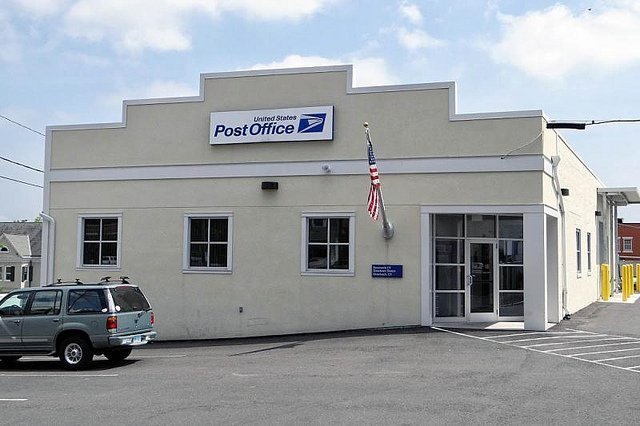 The historic Greenwich post office is on the National Register of Historic Places, so one might think that it would be protected, inside and out.  But landmark status has turned out to mean a few more hurdles to overcome before the demolition could begin.

In September 2011, a news report said that any changes to the building would need to be approved by the state of Connecticut.  According to documents filed with the Greenwich Town Clerk's office, "No construction, alteration or rehabilitation shall be undertaken or permitted to be undertaken that would affect the historic features … without consultation with and the express permission of the Connecticut Historic Preservation and Museum Division."

Well, all that consultation took place and the plans were approved — by the town’s Planning and Zoning Commission, by the Historic District Commission, by the Architectural Review Committee, and probably by other government agencies as well.  It sounds like the approval was quite enthusiastic.

According to the Greenwich Time, Donald Heller, chairman of the Planning and Zoning Commission, “lavished praise” on the planned transformation of the landmark.  "I felt very good about it," Heller said after seeing a presentation of the plans. "It's just a magnificent job. Isn't it gorgeous?"

Katie Brown of the Greenwich Historic District Commission also praised the architects for their commitment to preservation.  "I think you've done a remarkable job," Brown said when she saw the plans. "It looks to me that they've made every effort to respect the building so it could be used in a modern way as a retail store."

In addition to approving the site plan, the Commission voted to give the building a historic designation, but it turns out that this designation didn't add protections to the building.  As a representative of Malkin's company explained, the designation allows the Planning and Zoning Commission to disregard a requirement that the building have designated parking.

The new retail space will feature a deck with a sunken roof on the building's second floor.  A 1936 addition to the building will be enlarged to create a landscaped courtyard displaying outdoor furniture. 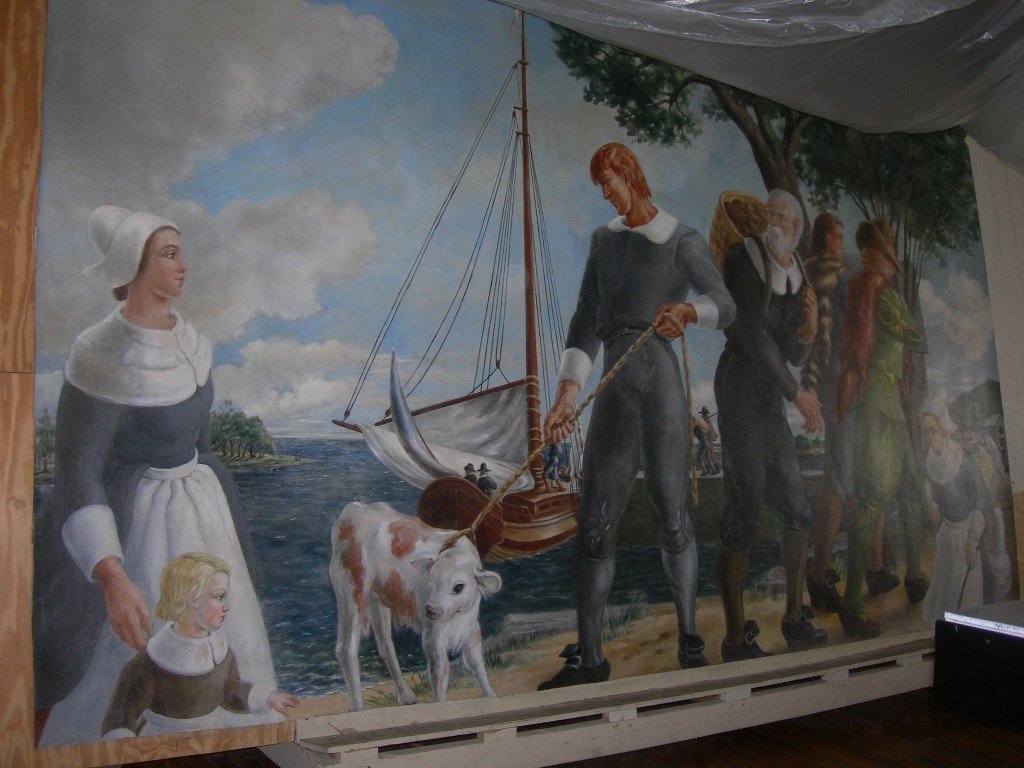 There aren't many photos of the interior before demolition on the Internet, perhaps because the Postal Service makes it difficult to take photographs of its properties, but the application for the National Register says this:

“The lobby is high, spacious, follows the curve of the front loggia and features brown and white terrazzo floors with red and white marble borders and black marble baseboards. Walls are white painted plaster and wood trim with classical moulding and ornamentation.”

The interior contained a mural depicting the founding of Greenwich, by artist Victoria Hutson Hutley of West Cornwall, done in 1939.  It's being moved to the Havemeyer Building, which houses the Board of Education.  Another mural was removed years ago and has apparently been lost.

Times change, and we change with them

The downtown Fairfield post office, 1262 Post Road, was built in 1936 under the New Deal.  It sold last year for $4.3 million to a local investment group named Redgate Partners.  That was about a half million dollars less than the $4.89 it was appraised at.  (For more on other post offices sold for than less-than-market-value, see Peter Byrne’s article in in the East Bay Express and the full version of his report on Amazon.)

While the old post office gets repurposed, a new postal facility was opened in Fairfield just a few feet away, in a small retail space wedged between a photo shop and a children's bookstore.  Evan Kalish's photographs again provide a telling contrast.

When the sale was announced back in May 2012, the new owners made it seem like they planned to preserve the property.  In the CBRE press release announcing the sale, Russel S. Bernard, Managing Principal of Westport Capital Partners, is quoted saying, "This is a unique opportunity to acquire an iconic building in a community that values a downtown, pedestrian retail experience.  We look forward to maintaining this as a premier property and shopping destination."

The developers’ proposal said they planned to “preserve the front façade and some interior portions of the building and remove the remaining structure and construct a new one-story retail building.”  Overall, the 11,130-square-foot building will be reconstructed into a 17,000-square-foot structure.

According to an item about the sale in the Fairfield Citizen, “The sales transaction also requires that all original woodwork in the building's public lobby area be preserved and that the Connecticut State Historic Preservation Office will have an opportunity to review architectural plans for any demolition or alterations to the building's wings that were added after the original construction. The original core of the building must remain.”

Judging by the photos, the wings are going and not much of the interior has been preserved.  Only the front façade of the central part of the building remains.  Most of the post office has been demolished — that’s the word used by the Fairfield Citizen.

As in Greenwich, the demolition doesn’t seem to have encountered much opposition among town officials.  The Fairfield Economic Development Commission reviewed the proposal and approved it, and the panel’s chairman told the local news that it was “an interesting and nice plan.”

The post office — or what’s left of it — will be turned into a restaurant called Plan B Burger Bar, which advertises “humane beef” and a selection of “all natural boutique bourbons.”

There was a mural in the post office, painted in 1938 by New York artist Alice Flint.  It has since been moved from the lobby of the post office to a second-floor conference room in the town hall.  The mural depicts a couple on horseback in a procession symbolizing the passage of time.  It’s entitled "Tempora Mutantur et Nos Mutamur in Illis," a Latin motto meaning “Times change, and we change with them.”