According to a letter to the New York State Office of Parks, Recreations and Historic Preservation dated August 14, the Postal Service says it is initiating a Section 106 consultation process under the National Historic Preservation Act.  The letter says that “the air rights above the Property are slated for sale, which will transfer the air rights out of federal ownership.”

The Postal Service has already determined that there will “no adverse effect” from the sale because as part of the disposition of air rights there will be a protective covenant safeguarding the post office.  According to the letter, “The covenant requires the future owner to submit rehabilitation, alteration, or modification plans for the interior and exterior historic character defining features of the Property to the NY SHPO for review to avoid potential adverse effects by ensuring consistency with the Secretary's Standards for the Treatment of Historic Properties and applicable guidelines.”

The Postal Service used a company called Tetra Tech to evaluate the potential impacts.  That is itself of some interest.  Tetra Tech is the same company the Postal Service and its real estate broker, CBRE, chose to do the historic structure report on the Berkeley post office.  As discussed previously on Save the Post Office, Tetra Tech has a long relationship with Richard Blum, until recently the chairman of the board of CBRE (and husband of California Senator Dianne Feinstein).  It’s not exactly the company you would turn to if you wanted to avoid the appearance of a conflict of interest.

In 2005, the Postal Service sold the air rights over the Cooper Station in the East Village and the Times Square Station on West 42nd Street.  In these cases, the air rights were transferred to developers of adjacent properties, permitting them to erect larger buildings than would otherwise have been permitted. 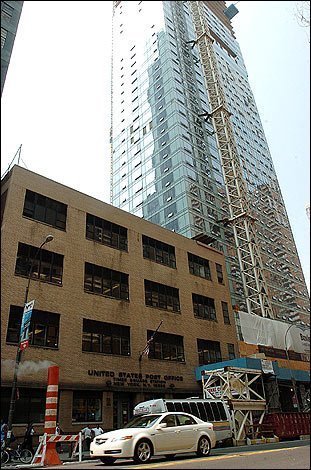 At the time, the Advisory Council on Historic Preservation and community organizations criticized the Postal Service for selling the rights without first studying the impacts on nearby historic buildings and going through the Section 106 process.  The Postal Service responded that the air rights transfers would not in themselves have any impact on historic properties and that impacts would occur only when the developer who bought the rights put them to use.  That, of course, is exactly what happened.

The air rights over the Times Square Station were sold to Intell Management and Investment, which ended up building a 61-story condominium that obscured the view from the west of the McGraw Hill building, a 1930 New York City landmark adjacent to the post office.

The rights over the Cooper Station post office were sold to a developer who built a 26-story dorm for New York University, angering many in the community because it was far taller than anything else in the East Greenwich Village neighborhood.  (There's more on the story here, with helpful links to official letters, etc.)

But the proposed covenant is brief — just two pages — and it restricts itself to the interior and front façade of the post office.  It doesn’t get into other potential impacts of a large new structure adjacent or even above the post office.  The Postal Service probably doesn’t want to have to encumber the sale with a more detailed covenant putting a lot of restrictions on what the developer can or cannot do.

For this and other reasons, the finding of “no adverse effect” may be questioned by one or more of the agencies participating in the Section 106 process for Old Chelsea.  That includes the National Trust for Historic Preservation, the New York City Landmarks Commission, the New York Landmarks Conservancy, and the community organization Save Chelsea.

Save Chelsea is already engaged in a fight over the sale of air rights from Hudson River Park piers for development along the waterfront in the neighborhood.  It may soon find itself in a similar fight over the air rights over the Old Chelsea post office.