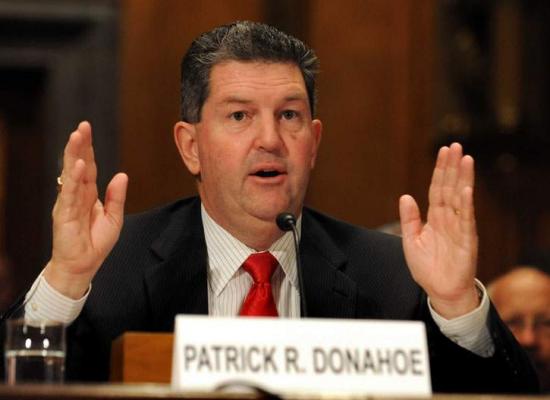 If all you watch and read is the mainstream media, you're probably convinced that the U.S. Postal Service is on the brink of bankruptcy, desperately in need of a bailout that taxpayers will have to pay for.  The leaders and managers of the Postal Service have contributed to this view by telling people across the country that the USPS is in such dire financial straits that it has to cut Saturday delivery and close your local post office.

Here, for example, is the Postmaster General's testimony before the Congressional hearings on "Pushing the Envelope: The Looming Crisis at USPS" that Dennis Ross ran a few months ago to stir up a sense of urgency.  Donahoe talks about how the financial "challenges" the Postal Service faces have necessitated reducing the work force and becoming "leaner."  Without changes to the law on funding health care, the USPS "cannot survive as a self-financing entity." Last year's losses, he says, were "staggering."  (Donahoe's testimony  begins 19 minutes into the video, and his remarks about the financial issues about 22 minutes, so just scroll at the bottom.)

And here is Donahoe on CNBC telling Larry Kudlow "we are not going broke."  (Donahoe's remarks on the health of the Postal Service come 30 seconds into the video.)

The bottom line is that manufacturing a "crisis" is a useful tool for getting things done.  There have always been people like Kudlow and Ross—and perhaps the PMG too—who want to see the Postal Service run not as a public service essential to democracy but "like a business," perhaps even turned into a private corporation.  Now they are creating an emergency atmosphere to accomplish goals they had long before the "crisis" emerged.

So next time you hear about the impending doom facing the Postal Service, well, maybe the situation is not as bad as some would have you believe.  Maybe they just have an agenda.  As I've said before on this blog, if the country could build 1,100 beautiful post offices in the midst of the Great Depression, it can weather its current problems without tearing apart the rich fabric of post offices that "bind the nation together" and without adandoning the Postal Service's commitment to universal service.