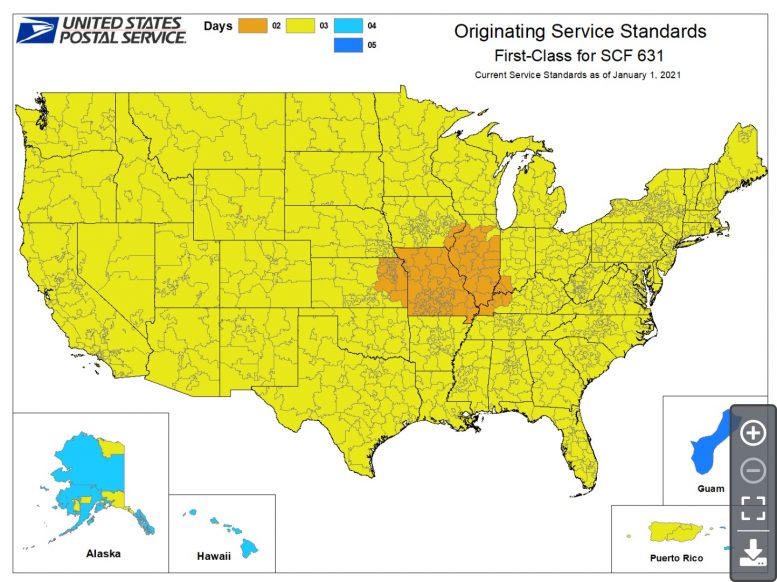 The House Committee on Oversight and Reform has just posted a discussion draft of postal reform legislation in advance of Wednesday’s hearing with Postmaster General DeJoy and the Chairman of the Board of Governors, Ron Bloom. The draft has three main sections — one about creating a Postal Service health benefits program that includes Medicare, one on reforming the Retiree Health Benefit Fund obligation, and a third on service standards for on-time delivery.

The section on service standards comes first, and it is obviously a response to all the problems with poor service over the past seven months. It includes more stringent service performance reporting than currently shared with the Postal Regulatory Commission and the public, a tougher line on what happens when the Postal Service fails to meet the standards, and changes to the PRC’s advisory opinion process for reviewing a change in standards (including a report to Congress). The draft legislation concludes this section as follows:

“The United States Postal Service may not revise the service standards for market-dominant products in effect on the day before the date of enactment of this Act in a manner that lengthens delivery times before the date on which the report required by subsection (c) is submitted to Congress.”

The Committee’s meeting on Wednesday is clearly going to address the past problems with service performance and what to do about them moving forward. (There’s more about the delays here.) It’s also clear that the Committee is aware of the Postmaster General’s plans to change service standards, as was reported recently in a great scoop by the Washington Post, and the Committee wants to head the PMG off at the pass.

Aside from the few clues in the Post’s article, we haven’t heard anything about what these changes in service standards might be. Perhaps the Postmaster General will reveal more in Wednesday’s hearing. While we wait, let’s speculate.

On February 12, the Washington Post reported that Postmaster General DeJoy “has discussed plans to eliminate a tier of first-class mail — letters, bills and other envelope-sized correspondence sent to a local address — designated for delivery in two days. Instead, all first-class mail would be lumped into the same three- to five-day window, the current benchmark for nonlocal mail.”

The Post goes on to say, “The plan also prevents first-class mail from being shipped by airplane . . . forcing all of it into trucks and a relay of distribution depots.”

What does all that mean?

Under current service standards, First Class mail that is local enough to require passage through only one mail processing center is supposed to be delivered in two days (or in one day even, if it’s dropped, presorted, at the center by the Critical Entry Time). Officially, this is called intra-SCF mail because it stays within a geographic region served by a single Sectional Center Facility (mail processing center). That includes a letter going across town or as far away as a few hundred miles, so long as it’s inside the SCF region.

Mail that requires going through two or more sorting facilities is called inter-SCF mail, and it has a service standard of 3 to 5 days. For over 99 percent of this mail, the designated service standard is actually just 3 days, and this encompasses all mail sent and delivered within the continental U.S. The fourth and fifth day are only for the tiny portion of the mail to and from Alaska, Hawaii, Puerto Rico, Guam, and the Virgin Islands. 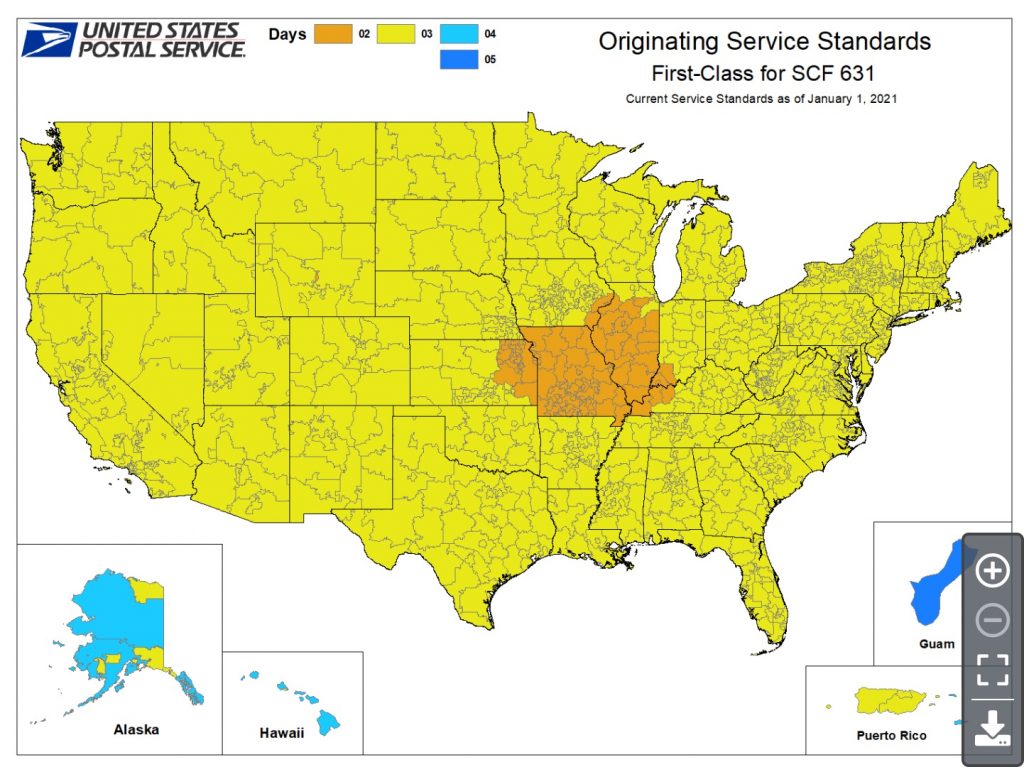 The Postal Service uses planes owned by FedEx, UPS, commercial carriers and others for mail that would otherwise not be able to make the 3-day service standard because the distance is too far for surface transportation, or perhaps to avoid traffic congestion or bad weather.

According to data provided to the PRC about service performance and measurement, about 56% of First Class mail has a 3-day standard, and about a third of that mail goes by air. Overall, about 20% percent of First Class mail gets airmail treatment. If the Postal Service ends air travel for First Class, it could slow down over 10 billion of the roughly 53 billion pieces of First Class mail. Instead of an expected delivery in 3 days, it will take 4 or 5 days.

But much more than 20 percent of First Class mail could be slowed.

The Washington Post says the Postmaster General is considering eliminating the 2-day standard for “local” mail (the intra-SCF mail) and lumping it in with the 3-5 day mail. In other words, the 2-day mail will become 3-day mail. This 2-day mail currently represents about 37 percent of First Class mail, so approximately 20 billion pieces could take another day to deliver.

Then there’s the intra-SCF mail that the Postal Service is currently able to deliver the next day because it was presorted and dropped off at the SCF by the Critical Entry Time, for delivery directly to post offices in the SCF area. About 7% of First Class, or 3.7 billion pieces, get overnight delivery. We’ll assume this 1-day mail will turn into 2-day mail.

Finally, there’s the inter-SCF mail that currently goes by ground. This represents about 36 percent of First Class mail, or about 19 billion pieces. Under the hypothetical scenario being described here, this mail could fall within either the 3-day standard (no change) or 4-day standard (one extra day). Let’s assume it can make the 3-day standard. It’s the only type of mail in our hypothetical scenario not impacted by the service standard changes. The rest of First Class mail — 34 billion pieces — would be a day, sometimes two, slower than under current standards.

It should also be noted that within each service standard, some mail is single piece and some has been presorted. Overall, about one-third of First Class mail is single piece, and two-thirds is presort. Given that the Postal Service has already created an overnight service standard that applies only to presort mail, it’s possible that the new system would also provide separate standards for the rest of presort mail. That’s a bit too complicated for this analysis, so let’s leave it off the table for now.

Here’s a chart summarizing the current breakdown and the hypothetical described above.

Here’s what that looks like in a couple of pie charts.

The Postal Service already uses a system like this for Marketing Mail and Periodicals, for which there are complicated maps indicating how many days it should take to deliver mail to different parts of the country. For example, here’s the map for the 631 zip code for Periodicals, which have a service standard of 3 to 16 days. 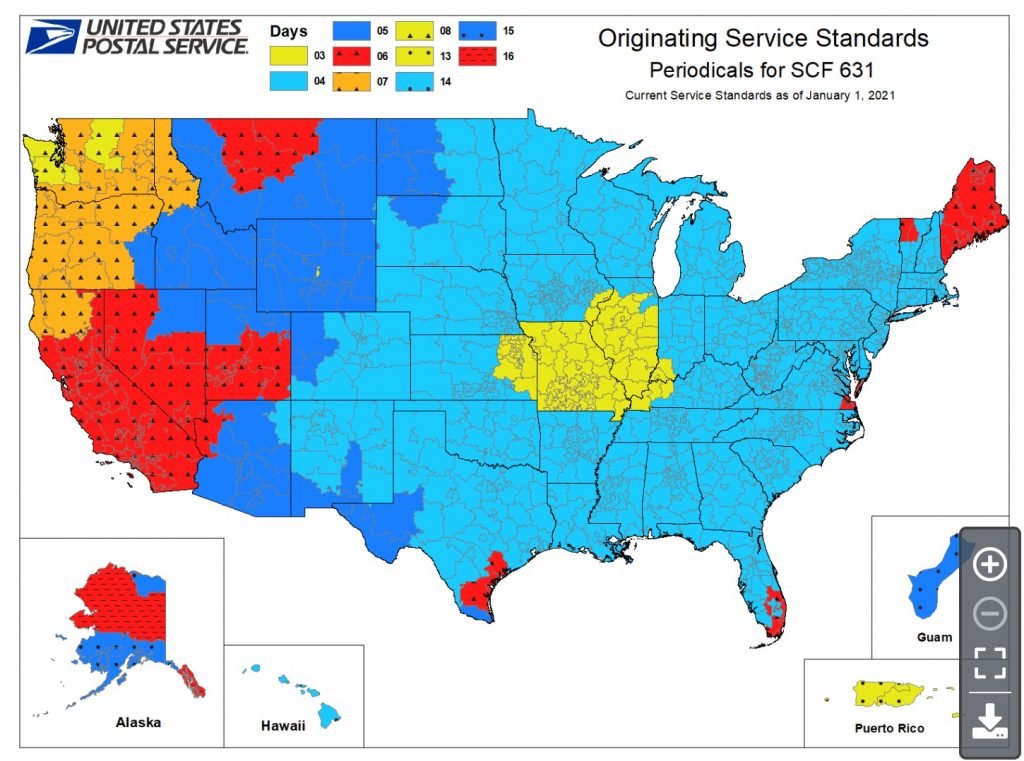 The map shows that for Missouri, most of Illinois and some of Kansas, Periodicals have a 3-day standard, for most of the Midwest and East, a 4-day standard, and for the West, 5 to 8 days.

Anyway, this is all just speculation about what the Postmaster General has in mind. Whether or not the House’s reform legislation makes it into law anytime soon, the Postal Service will still need to go through an advisory opinion process to change standards, just as it did back in 2012, when it added a day to most kinds of mail in order to make it possible to close about 140 mail processing plants under the Network Rationalization plan.

As part of the advisory opinion process, the Postal Service will explain, in great detail, how a change in service standards will save money on transportation (by ending air travel) and mail processing, perhaps delivery as well. With more time to meet the new standard, the Postal Service would presumably be able to reduce work hours and spend less on premium time (for Sundays) and overtime (both regular and penalty).

The Commission, the mailers and unions will want to know more about how the mail flow will be impacted, how the projected cost savings have been calculated, and what kind of market research, if any, the Postal Service has done to determine how slower mail might hurt revenues. That was a big issue back in 2012, and it could become one again.

So stay tuned for Wednesday’s hearing at the House. It should be a good one.