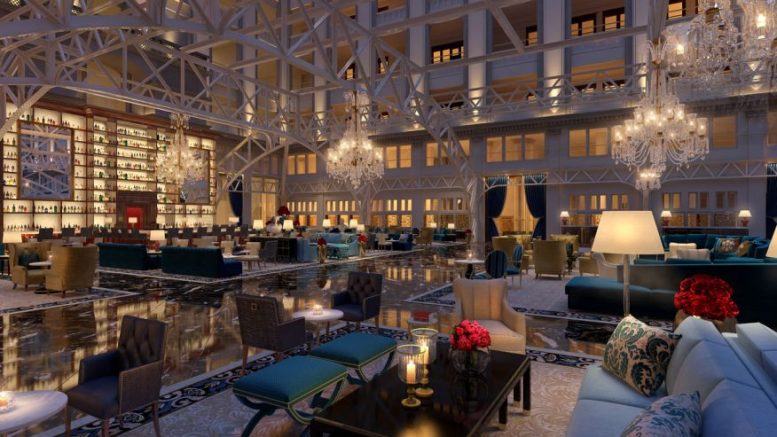 The grand opening of the Trump Hotel at the Old Post Office Pavilion in Washington, DC, has been getting a lot of attention this week.  Several news items focus on the hotel’s cocktail lounge.  See, for example, the Daily Beast, Huffington Post, and the Washingtonian, as well as an earlier piece from September in the Washington DC Eater.

The Trump Hotel plays off the fact that the building is a historic post office by calling the bar and lounge “The Benjamin,” after our country’s first Postmaster General.  The menu also features a cocktail called the “Postmaster General.”  It’s made with Tito’s vodka, pear, chambord, and prosecco.  (Perhaps the bartender can explain how the ingredients relate to the name.)

There’s another cocktail — made with Suntory Toki Japanese Whiskey — named the “1899,” which must be a reference to the year the Old Post Office originally opened, though there doesn’t seem to be a note about that on the menu.

The cocktail prices have apparently been jumping around a bit.  As noted by the Washingtonian article, several drinks have gone up since the soft opening in September.  An earlier menu shows that the Postmaster General initially cost $16 (now $20); the John Willet went from $18 to $24; and the 1899 went from $18 to $23.  A menu on the hotel’s website now shows all of these drinks at $20.

The current menu has also a new item at the top of the list: “the Benjamin.”  It consists of a blend of rye, potato, and winter wheat vodkas served with raw oysters and caviar.  It costs $100.

The menu has an explanatory note saying that Benjamin Franklin was not only the first Postmaster General but was “also known as a ‘Founding Foodie’ and for his belief that ‘There can’t be good living where there is not good drinking.'”  (Trump himself is a teetotaler.)

The note goes on to say this: “Benjamin’s Bar & Lounge brings our namesake’s lifelong passions of inventions, fine beverages and food to life in the 21st century. Wine by the spoon, champagne sabering, Fabrice’s exquisite French pastries and chocolates, charcuterie at a new level. What will Benjamin’s invent next?”  A question, no doubt, being asked by many of Trump’s followers.

Back in February 2012, when the General Services Administration awarded Trump the contract to redevelop the Post Office property, I wrote this article for Save the Post Office.  It included a photoshopped image suggesting how Trump would modestly brand the building with his logo: 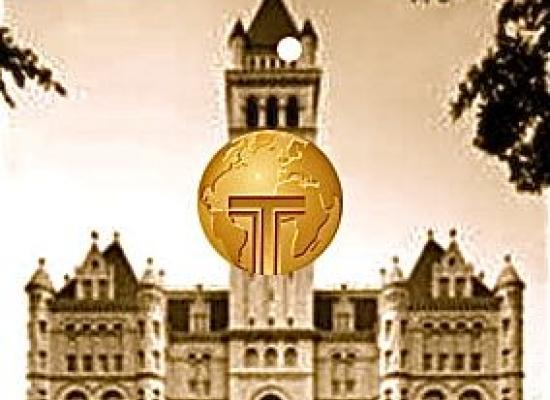 The article notes that several federal agencies that were occupying the property at the time would have to move out, including the National Endowment for the Arts, the National Endowment for the Humanities, and the Advisory Council on Historic Preservation.  Interestingly, the ACHP would later issue a report criticizing the Postal Service for its management of historic postal properties.  (The Old Post Office was not included in the report, since it was managed by the GSA, not the USPS.)

Trump must have already been signaling a run for the Presidency in 2012.  My article concludes with this offhand remark: “The Old Post Office is located at 1100 Pennsylvania Avenue, about five blocks from 1600 Pennsylvania Avenue.  The new Trump hotel will be as close as the Donald ever gets to the White House.”

Well, I guess we’ll soon see about that.

There’s more about the Trump Hotel in these articles archived on STPO.