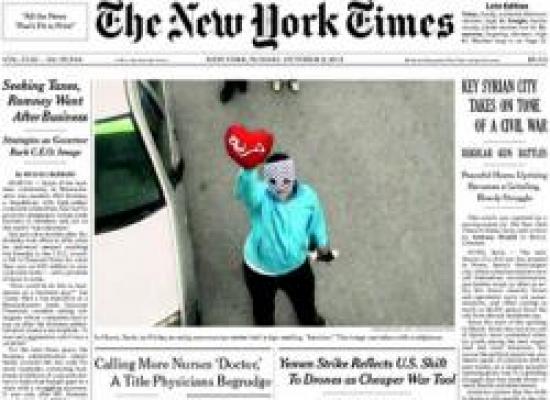 The New York Times does it again.  Not a word, not one, about the hundreds of “Save America’s Postal Service” rallies that took place across the country on September 27, and then today it publishes an article with the usual mainstream-media slant and uncritical repetition of Postal Service PR.  It's by Randall Stross, a business professor at San Jose State University, a regular for the Times but someone who does not appear to be an expert on the postal system.  It’s hardly worth going through one of these articles again, but here we go.

The article, which is entitled “Reading the Writing on the Envelope,” begins with what the professor probably thought was a very clever reference to the Pony Express, which lasted only 18 months, done in by the telegraph.  The thesis is clear from the start — the Postal Service will go the way of the Pony Express because of the Internet: “Now, 150 years later, the United States Postal Service is engaged in another race with technology, one it can’t possibly win.   But because the service is a quasi-independent government agency, it continues to maintain the huge human and mechanical infrastructure that was assembled for a pre-Internet age.”

In other words, the Postal Service is doomed for two reasons: one, the Internet, and two, it’s a government agency.  So we don’t need the postal system anymore because we have email and electronic bill paying, and by the way, since it’s become irrelevant, we may as well privatize it so it can act like a real business and get rid of workers and post offices.

To support the Internet contention, the professor cites declining mail volumes — down from 213 billion pieces in 2006 to 171 in 2010, with first class down 47% since peak in 2001, and standard mail, down 8%.  The cause? “Electronic diversion continues to cause reductions in first-class mail,” says the Postal Service.

The article does take a moment to cite the APWU’s view that mail volume is down for a different reason — advertising, the principle component of the mail, has fallen due to the recession.  But the professor will have none of this: “that, of course, ignores the rise of the Internet, and its ever-growing use for checking bills or sending payments — with no need for that army of 500,000.”

This estimate is born out by the Boston Consulting Group, which the Postal Service commissioned to make some forecasts about the future volumes of various types of mail.  The study predicts an average annual decline of 1.5% over the next ten years, and for first-class, 4%.  Nothing, in other words, like the declines we’ve seen over the past few years.  Why?  Because it’s the recession, not the Internet, causing most of the decline, and once the economic cycle takes a turn and starts to expand again (maybe the business professor can tell us when that will happen), the precipitous declines will level off to something more gradual.

But gradual declines do not fit the crisis scenario the Postal Service and the mass media want to scare us with.  They need a crisis to justify destroying the unions and making Draconian cuts to the workforce and post office infrastructure, and they need a crisis so people will listen to the hucksters of privatization.

As for the real cause of the current financial problem, Professor Stross has only this to say.  “The postal unions avert their eyes. They say that the service ran into trouble solely because Congress has required huge payments for future retirees’ health care costs. Silly me: I thought funding benefits fully was a good thing.”

The sarcasm is lame and the real issue is not addressed.  The professor might have said something about how Congress unnecessarily requires postal employees to pre-pay 75 years of health benefits over 10 years — something no other business or government agency is required to do — and these payment could easily be dispensed with because there’s $50 to $75 billion surplus in other retirement funds.  (Determining the exact amount of the surplus will be the goal of yet another study by the GAO.)  Having acknowledged these facts, the professor would have then been welcomed to dispute them, and perhaps he could have then explained why this is “a good thing,” even if it means putting a couple of hundred thousand postal employees out of work and doing irrevocable harm to thousands of communities by closing their post office.

Then the article takes us to its grand finale.   The big deficit is pushing the Postal Service to “the brink of default” and a bailout is on the horizon.

At this point, the article turns to an interesting issue, thanks to some help from A. Lee Fritschler, professor at George Mason University and former chair of the PRC.  Fritschler says the Postal Service has become a “broadcasting medium” that is largely devoted to distributing advertising, so any subsidy of the postal system in effect subsidizes the advertising industry. “Why on earth should our government be subsidizing a broadcast medium?” Professor Fritschler asks.

The question is not exactly on the mark, since the Postal Service isn’t asking for a subsidy and doesn’t need one.  It just needs its pre-payments to the health benefit fund corrected, and it would help if it could access its huge retirement fund surpluses.  But the issue of the Postal Service as an arm of the advertising industry is definitely worth thinking about.

The Postal Service has clearly become too dependent on the industry, and management’s decisions are too often influenced by what’s good for its big stakeholders rather than what’s good for the country.  It was a mistake for management to put the postal system in this position, and it should be rectified with higher rates for most forms of bulk mail, some of which, like catalogs, are already being subsidized by postal customers because they cost more to handle that they bring in as revenue.

But postal workers and Americans who need a postal system and value their post office should not come out the losers because of the mistakes of postal management.  The postal system is not simply about delivering advertising.  A significant portion of the country is not hooked up to broadband and they use the post to communicate, a surprisingly large number use the post office as a bank, and the Postal Service helps the country in countless ways — supporting small businesses that can’t afford the private shippers, providing employment to a half million people, and maintaining post offices that are the heart and soul of thousands of small towns and urban neighborhoods.  The huge infrastructure that the professor disparages as no longer necessary in fact continues to serve a very vital function for the nation.  It’s not going away anytime soon, and with visionary leadership, the Postal Service could play a significant role in the country’s future.

Maybe it’s the New York Times that ought to be worried about the future.  Business hasn’t been so good lately.  Profits in the first quarter of 2011 were down 57% compared to 2010, and second-quarter earnings fell 82% from the year-ago quarter.  Why? Print advertising revenue continued to shrink, says Times Chief Executive Janet Robinson, because of the "U.S. economic slowdown and secular forces playing out across the media industry."

But who needs the Times, anyway?  It’s packed with advertising for products that only the upper classes can afford, so buying a copy of the Times just subsidizes these advertisers.  Plus, the Times’ notion of what constitutes news and analysis is becoming increasingly irrelevant thanks to the Internet, which is making it possible for citizens to report and analyze the news without having to worry about supporting a huge infrastructure of reporters, editors, printers, sales people, and administrators.

The Postal Service is not going the way of the Pony Express, but the New York Times might be.  As the professor says of the Postal Service, its “raison d’être is rapidly vanishing before our eyes.”