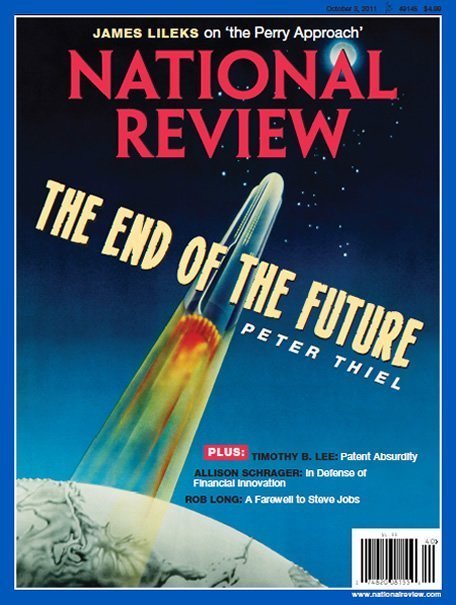 The Oct. 3 issue of the National Review has an article by Robert VerBruggen entitled “Dead Letter – Tough Unions, Weak Management Doom the USPS.”  The National Review Online is subscription only, so you’re spared having to read it, but if you want a taste of VerBruggen, you can check out some of his earlier pieces, like “Yes, End the Postal Service” and  “Post Office Creeps Closer to Default.”

You can tell from the titles where VerBruggen is coming from.  His most recent piece recycles the usual misinformation about postal issues: It mischaracterizes the $5.5 billion pre-funding payment for retiree health care benefits, blames the unions for postal ills, sets up a bogus comparison between the USPS and FedEx and UPS, and, not surprisingly, concludes that the USPS must be privatized.

VerBruggen’s piece was too much for one postmaster to take.  The following is a “letter to the editor” written by Mark Jamison, a postmaster in North Carolina.  (Jamison has also written an excellent letter to the PRC for its Advisory Opinion on the Retail Access Optimization Initiative, which you can read here.)

First, let’s correct a couple of errors and distortions in Mr. Verbruggen’s article:

The USPS pays into two retirement funds for its employees.  The older is the Civil Service Retirement System (CSRS) fund.  It has received funding of between $50 and $75 billion dollars in excess of its actuarial requirements. To be fair, there is some dispute about these overcharges.  When the Post Office was removed as a cabinet department by the 1971 Postal Reorganization Act, provisions were made to fairly distribute future payments to retirees and those who had worked under the old system.  Retirement accounting was in its infancy then, so certain decisions regarding the proper apportionment of responsibility for old Post Office Department employees were left unclear.

In subsequent years legislation clarified some of these responsibilities, and based on currently accepted accounting procedures, the Postal Service appears to have been overcharged for those employees who worked for the old Post Office Department. The USPS OIG, the GAO and the Siegel Group, under contract to the Postal Regulatory Commission (PRC), have all determined that the methodology used by the Office of Personnel Management (OPM) to calculate the USPS liabilities is incorrect; only the amounts of the overcharges differ.

The second retirement fund, the Federal Employees Retirement System (FERS), contains employees who began after 1984. There is no dispute that the Postal Service has over funded its obligations to FERS by $6.9 billion.

Mr. VerBruggen mentions neither of these issues in his article.  Instead he refers only to “the $5.5 billion annual payment,” without explaining what that is.  This is a pre-funding mandate established by Congress in the Postal Accountability and Enhancement Act (PAEA) of 2006, ostensibly for the purpose of pre-funding retiree health care benefits.  The law required the Postal Service to pre-fund retiree health benefits for 75 years in advance within a ten-year period, which is why they are so high and out of line.  In addition to this requirement fund, the Postal Service pays $2 billion per year for current retiree health care benefits.

When one looks at the discussions that led to the creation of PAEA’s pre-funding mandate, one finds that Congress was less concerned with pre-funding benefits than it was with finding a mechanism to force the USPS to find cost savings and efficiencies. It was thought that this annual payment would do exactly that.  Instead it has driven virtually all the deficits attributed to the USPS over the last five years.

The current retiree health benefit fund stands at $42 billion, which may be sufficient to cover the future liabilities given that the USPS is currently paying those costs out of current revenues without utilizing the fund.  In the meantime, the onerous mandate continues to undermine the fiscal health of the Postal Service while masking Congressional profligacy.  Funding benefits for employees who haven’t been born yet is more about the arcane scoring rules of the Congressional Budget Office than ensuring the fiscal integrity of the USPS.

Another of Mr. Verbruggen’s main points is that the USPS expends 80% of its revenues for employee compensation, and he compares this to its “competitors” — UPS and FedEx.  This 80% figure, widely circulated in the media, includes the $5.5 billion pre-funding requirement and is therefore grossly distorted.  But beyond that, comparing the USPS to UPS and FedEx is wildly distorting in itself.

First, the USPS is less a competitor to those two private sector companies than a cooperator (or “partner,” as they like to say).  Both UPS and FedEx receive huge payments from the USPS for transporting mail.  FedEx receives something to the tune of $1.3 billion per year for flying mail, and UPS provides much of the inter-city ground transport.

On the other side of the coin, both UPS and FedEx utilize the vast USPS network to provide last-mile delivery.  The USPS goes to 150 million addresses each day, something neither of the private sector companies can or want to do.  The ParcelSelect product both companies use allows them to focus on what they do well and profitably while utilizing the well-developed infrastructure built by the USPS over generations to open markets and provide greater opportunity.

Finally, Mr. VerBruggen assails the USPS for its monopoly power.  Actually the USPS possesses two separate and distinct monopolies, and it’s important to keep them straight.

The first, the one Mr. VerBruggen focuses on, is based on the private express statutes and is of very little value.  Essentially this monopoly reserves the right of the delivery of first-class mail matter to the USPS — unless the private carrier charges an urgency fee, which is essentially a fee equivalent to the basic charge for Priority mail ($4.95).  Both UPS and FedEx have carved out very profitable niches in the delivery of urgent mail.  There are also courier services in major metropolitan areas that do quite well in this segment of the market.

The fact of the matter is that no one could design a profitable business model on providing the kind of daily delivery the USPS does. The opportunity is actually there already —there is nothing in the monopoly provisions that restricts anyone from setting up a delivery network for advertising and marketing mail, which makes up the bulk of the mail mix.

The second of the USPS monopolies is the mailbox monopoly, and this provision may actually be worth something.  By law, the mailbox is reserved only for USPS mail carriers.  Over the years the value of this monopoly has been challenged as unfair by USPS competitors, but the argument in favor of its continuation has prevailed — limiting the use of the mailbox to representatives of the USPS ensures the safety and security of the mails.  Surveys show the American public is overwhelmingly in favor of the continuation of this monopoly.  Still, there is nothing in the statute that prohibits other carriers from designing a stand-along system to the mailbox — something common in newspaper delivery.

The current crisis of the USPS is essentially a manufactured one.  Even under the terms of the current labor contacts, the Postal Service has made a profit or broken even on operations over the last several years.  The deficits attributed to the USPS are wholly a result of pension overcharges and the onerous and irresponsible pre-funding mechanism for retiree health benefits created in the PAEA.

This brings us to the discussion we should be having: What is the proper role of government in providing postal services?  Mr. VerBruggen and the Cato Institute come down on the side of none, essentially arguing that the private sector can better provide services than the government.  I might agree with them if the USPS were simply a service provider, but it is something very different.

The Founders placed the idea of postal service in the Constitution because they saw a virtue in creating an infrastructure that would bind the nation together. “Bind the nation together” is a phrase that occurs over and over with respect to the USPS.  The Founders understood that for our democracy to flourish we needed a neutral mechanism for the free flow of information.  The USPS provided that and continues to provide that.  Postal rates that are affordable allow journals and magazines, like The National Review, to deliver their product and ideas to every corner of the nation.  Perhaps someday the Internet will totally replace that capacity, but for the time being and arguably at least another generation the capability is one we still need.

In addition to the necessity of having a freely accessible and wide-ranging network for the distribution of information and opinion, the Founders also saw the post as an economic engine.  The post was one of our great internal improvements, and like the road and canal systems that were developed in the early years of the nation and the interstate and air commerce systems that were developed in the mid-twentieth century, the USPS network provides a robust vehicle that aids and enhances commerce.

The development of infrastructure is arguably a reasonable role for government, and the postal network is a grand example of the realization of potential.  The postal network provides access to markets across the country in every nook and cranny.  Whole industries have been created based on this network. The business model of eBay exists because of the USPS network.  Private sector delivery companies like UPS and FedEx are more profitable because of that network.  Marketing and advertising industries rely on that network as a conduit for their products and greatly benefit from the reduced rates and open infrastructure postal networks provide.

I can agree with Mr. VerBruggen on one point: the management of the USPS has failed. They should have had the vision to understand the role of the USPS as infrastructure, but instead they have tried to reinvent the USPS as simply another mailing company.  If that is their vision, then perhaps the entity should be privatized, but the fact is that even with the technological challenges of the current era the postal network continues to have broad potential, utility, and efficacy.

The postal network is comprised of not only its delivery routes but a broad supporting structure that is technologically robust.  Postal vehicles could be used as platforms for data collection.  One example where this might be beneficial is in the newly growing market for weather derivatives as a form of crop insurance.  The usefulness of such products relies on the acquisition of huge amounts of specific and detailed data, and the postal network — with its reach, breadth and regularity — can provide the perfect platform for the collection of such data.

Electronic bill presentment and payment are the wave of the future, but for years to come there will be a significant segment of the population that cannot or will not access these services.  Rather than simply leave them behind and lose the potential of a market, the ubiquity of the USPS and its technological resources can be utilized to create an electronic system that is accessible to everyone. Such a system could save American businesses millions of dollars.

There are myriad ways in which the postal network could be utilized for the benefit of the nation and the enhancement of markets and commerce. The key is in viewing the USPS for what it is — infrastructure — and acknowledging that as an appropriate and universally useful function of government.

Most of the arguments surrounding the current postal crisis seem to be based on misinformation, disinformation, or ideological approaches that ill define the actual circumstances.  Unfortunately, Mr. VerBruggen’s article takes that approach and fails to add anything useful to the conversation.