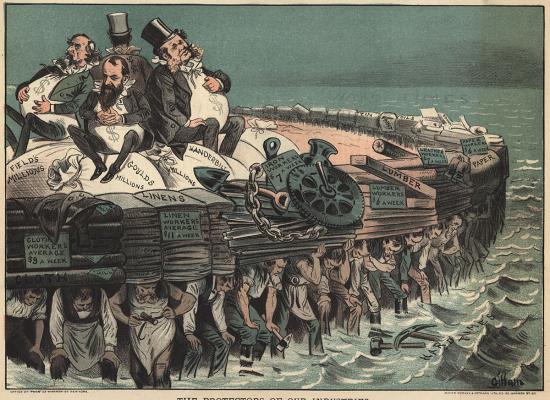 Over four thousand post offices slated to be closed, and just as many news articles about the closings, yet not a word in the media about the billionaires and millionaires who are running the show.  All you hear is how postal revenues are declining and no one uses the post office anymore.  But somehow the Postal Service was still able to outsource $12 billion in 2010.

It’s not hard to see what’s going on.  The Robber Barons are stealing the post office from the American people.  Closing down post offices to save a little money is just a big distraction, a show to make it look like the Postal Service is acting like a responsible business.  In the meantime, the Robber Barons are plundering the postal system via the outsourcing contracts they’ve negotiated with cooperative Postal Service executives.

Two of the six richest men in the country are Charles and David Koch, with combined assets of over $40 billion.  Some of that money gets funneled to Tea Party politicians like Darrell Issa and Dennis Ross, who are co-sponsoring a Postal Reform Act that is all about attacking unions and closing down post offices.  The Koch brothers also founded and fund the Cato Institute, a right-wing think tank that cranks out white papers arguing for the liberalization of the postal “monopoly” and privatizing the postal system, preferably after the system has been streamlined by cost cutting measures like breaking down union contracts and closing “under-performing” post offices.

Next come the major stakeholders of the postal system—the corporations that do big business with the Postal Service.  At the top of that list is FedEx, the biggest stakeholder of them all by far.  For servicers rendered to the USPS in 2010, FedEx took in $1.37 billion.  And FedEx CEO Fred Smith, who likes to rail against the Postal Service, earned a total compensation of $10.4 million in 2008, and he’s surely making more this year.

Northrup Grumman is the second largest beneficiary of postal contracts.  It took in about a half billion dollars from the USPS in 2010.  Grumman CEO Wes Bush earned almost $23 million last year.

Louis Giuliano is the Chairman of the USPS Board of Governors.  His salary is an honorarium, $30,000 a year.  But when he was chair of ITT, he made about $15 million a year.

Those are the kind of people making the decisions to close the post offices.  They are part of a corporate elite that runs everything in America, including the Postal Service.

The Postal Service executives who get the credit and blame for making the closing decisions work at the postal headquarters in L’Enfant Plaza, Washington.  These executives are the minions of the Robber Barons, their managerial class.

Their salaries are nothing compared to what the billionaires and millionaires take in, but they do make a nice living.  The top one hundred make earn around $150,000 to $200,000 a year.  And that’s just base pay without pay-for-performance bonuses.  Apparently there’s plenty of that going around, considering that the Postmaster General’s base pay is $276,840, and he is said to come home with $800,000.

Though relatively modest for corporate executives, those salaries do add up.  The salaries of the top one hundred people working in L’Enfant Plaza comes to about 17.5 million.

Working our way down the postal ladder we get to the postmasters and letter carriers and the guy who fixes the sorting machine when it gets jammed and the $10-an-hour folks who don’t belong to the union and get contracted out to do delivery work.  All we seem to hear about these postal workers is that their union contracts are too generous and that’s part of why the Postal Service is having financial troubles.  Never mind that these are the people who actually make sure the mail gets delivered.

Then there are the post offices themselves.  Of the 4,400 post offices that are being studied for closure right now, only about 600 are owned by the post office.  It will take some time for the Postal Service to close post offices when it owns the buildings, since they need to get sold off one by one.  But it’s easy to close a leased post office.  Just walk away from the lease and pay what’s due on the remaining years.  That is, when there is a lease obligation to begin with.

The amount of money that goes toward renting post offices is insignificant in the context of the Postal Service’s annual budget.  The total amount of rent being paid for the 3,800 leased post offices on last week’s lists was about $40 million, and that includes several expensive rentals.  That’s 0.06% of the USPS budget of $70 billion.

The vast majority of the post offices being studied for closure pay a very modest rent.  About 3,200 of those 3,800 pay an average of about $400 a month, for a grand total of $14.3 million.  That’s less than the annual salary of Fred Smith or Wes Bush or Louis Giuliano at ITT, and it's less than the salaries of the top hundred execs at HQ.  And it’s also less than one percent of what the Postal Service outsources to FedEx each year.  Why isn’t anyone talking about cutting the FedEx line in the USPS budget instead of closing all those post offices?

A few months ago there was a story about a woman who ran the Doylesburg PA post office out of her general store.  The Postal Service paid her $13 a day, for her salary and space rental combined.  After doing it for years, she asked for a raise, but the Postal Service turned her down and the Doylesburg post office is now closed.   As USPS regional spokesman Ray Daiutolo told abc27, "Right now, we're losing a lot of money. Anywhere we can cut expenses without impacting customer satisfaction, we have to do it. We have no choice."

Ray may be right.  The managers of the Postal Service don’t have a choice.  They’re minions for the Robber Barons, doing what they’re told.  They just work for the rich.  We all do.