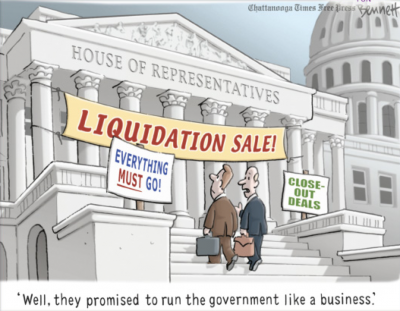 Accusations that the PMG’s ultimate goal is to privatize the Postal Service are apparently starting to make some of the folks at L’Enfant Plaza a little touchy.

On January 17, the Washington Post ran a story about the new postal counters in Staples that included a quote from Senator Jon Tester of Montana: Donahoe “can say whatever he wants but I think he wants to privatize.  And I think there’s plenty of people in Congress who agree with that. I don’t.”

This isn’t the first time Senator Tester has expressed skepticism over the intended direction of the Postal Service.  In two hearings held a week apart last September, Senator Tester expressed much the same opinion.  At the hearing on September 19, the senator opened his questioning of the PMG like this: “I would say that if the goal is to privatize the Postal Service, then we ought to have a bill to do exactly that and move forward.  I think it would be a mistake, but nonetheless we ought to have that debate.”

Postal News Blog recognized the significance of Senator Tester’s remark in the Washington Post article and made it the headline of a blog post.  That in turn provoked David Partenheimer, Manager of Media Relations in the Corporate Communications department of the Postal Service, to post this comment on Postal News: “Privatize? Nonsense.  The Postal Service has no intention to seek privatization.”

Mr. Partenheimer then proceeded to explain that initiatives like providing postal counters in Staples were solely about access.  He also pointed out that the Postal Service lost $5 billion last year, neglecting to mention that operations were profitable and that the loss was solely the result of the retiree healthcare burden.  Mr. Partenheimer then suggested that the onus was on Congress “to pass comprehensive legislation to provide a long-term solution to our financial challenges.”

This is the first time in my memory that a senior Postal Service official has chosen to participate in the comment forum on a blog.  Not that the Postal Service has been shy about getting its views out into the press.  For example, we regularly see letters from District Managers in local papers promoting various Postal Service talking points.

And this isn’t the first time Mr. Partenheimer has responded to things he’s read on postal websites.  He contacted Save the Post Office a while back, having taken umbrage at how POStPlan community meetings had been characterized as a waste of time.  Mr. Partenheimer tends to see the Postal Service’s intentions and actions through rose-colored glasses.  But what else would you expect from a corporate PR professional?

On another previous occasion, I contacted Mr. Partenheimer regarding a piece I was writing about the PMG’s testimony at that September 19th hearing where Senator Tester made his comments about privatization.  I wanted to know why the PMG had testified that an arbitrator cannot consider the financial health of the Postal Service in arbitrating a contract — a statement I knew to be incorrect.  Mr. Partenheimer didn’t want to deviate from his talking points, and he would do nothing but refer me back to Mr. Donahoe’s written testimony.  As it turned out, Senator Tester subsequently questioned the PMG further about the matter when he testified a second time, and Mr. Donahoe did walk it back, saying he “misspoke.”

Anyway, the PMG is now finding it necessary to push back against accusations from the APWU leadership, Senator Tester, and many others that he’s trying to privatize the Postal Service.  In an AP story about the Staples issue, Mr. Donahoe is quoted saying, “The privatization discussion is a ruse. We have no interest in privatizing the Postal Service.  We are looking to grow our business to provide customer convenience to postal products.”

Mr. Donahoe then goes on to explain that the Staples move is designed to improve access, not replace post offices, but he also acknowledges that the move could save money on employee expenses. Those statements are clearly contradictory.  Expanding access into Staples won’t reduce employee costs unless it also includes closing post offices or at least reducing their hours — and access.

When the Postal Service embarked on plans to close half of its mail processing plants, we were told it was because there was “excess capacity.”  But that wasn’t entirely true.  In order to close all those plants, it was also necessary to reduce service standards on delivery time.  Now there are reports all over the country about mail delays.  The fact is that for the last thirty years the Postal Service has sought to have the private sector take over much of its mail processing operations by offering dubious workshare discounts as incentives.

The Postal Service is currently experimenting with outsourcing large parcel handling to UPS, as reported in this post on Postal Reporter.  I’ve been told that this experiment has led to damaged and delayed parcels in one mid-western NDC, resulting in OIG inquiries, but the Postal Service is going nationwide with it anyway.

Another form of outsourcing has been to put postal retail counters in private businesses.  Even as POStPlan has reduced hours and access at 13,000 post offices, the Postal Service has actively sought to sign up retail partners like Staples and CVS, as well as promoting initiatives like Village Post Offices, which offer a greatly reduced set of services through counters in local retail stores.  The Postal Service says customers want the added convenience of “expanded access,” but in a an OIG report entitled “What America Wants from the Postal Service,” surveys found that while Americans appreciated various avenues of alternative access they did not consider them a replacement for the traditional post office.  The Postal Service nonetheless looks at postal counters in private businesses as a way to outsource retail operations and cut costs.

The drumbeat for privatization has been sounding for many years.  Throw a stone at a right-wing think tank and you’ll find a report promoting some variety of privatization.  The white paper sponsored by NAPA and Pitney Bowes is one of the most recent.  It makes the case for privatizing mail processing and retail operations while leaving delivery in the hands of the Postal Service, at least for the time being.

Throughout the history of the Postal Service — from the 1971 PRA that created it to the discussions that occurred in Congress during the next ten years and on to Potter and PAEA — management has often expressed a desire for many of the same things the current PMG advocates: freedom from regulation, the ability to operate outside of Congress’ discretion, more outsourcing, and greater leeway in pricing and product offerings.

Mr. Donahoe’s proposals about employee benefits and wage agreements also reflect a desire to act more like a private corporation.  He would remove the benefit programs from current Federal employee systems and authorize management to invest the funds in the markets.  He has also sought to mimic the private sector in terms of the employee-employer relationship.

The behavior of the Postal Service has been indicative of an organization that views its mission as one of “growing the business” rather than functioning as a public service.  Does Mr. Donahoe advocate taking the Postal Service public through an IPO or through some other arrangement that would make it a public corporation or a government-sponsored enterprise like Fannie Mae or Freddie Mac?  No, and virtually no one else with any knowledge of postal issues advocates that sort of direct privatization.  But there are other ways to privatize basic government services, like contracting those services out to the private sector.

Mr. Donahoe thinks that talk of privatization is a ruse — a tactic being used by his critics to divert attention from what he’s really trying to do, like make the Postal Service more efficient, give customers what they want, and so on.  But the real ruse is privatization itself.

As this piece in Businessweek points out, “Turning over the delivery of government services to private contractors can cause as many problems as when governments provide those services themselves.”  Just look at the “rolling train wreck” that is healthcare.gov.  Or check out this report from In the Public Interest, which debunks many of the myths of outsourcing, like the idea that it saves money, that private companies do a better job, that it gives government entities more flexibility, that it’s easy to reverse when things go wrong, and so on.

The PMG may say he has no intention of privatizing the Postal Service, but the obvious consequences of the agenda he has set, the policies he has promoted, and the actions he has undertaken is privatization.  Mr. Donahoe may not want to be Apple or UPS or FedEx, but he wants the kind of independence that a private corporation enjoys.

If one looks not at stated intentions but at actions and consequences, it’s clear that Mr. Donahoe, with the support of the Board of Governors and many in Congress, is less interested in providing an essential public service, fulfilling the universal service obligation, and preserving a valuable national infrastructure than he is in treating the Postal Service as if it were a corporation in the delivery business.  And that, by any name imaginable, is privatization.

[Mark Jamison is a retired postmaster for the US Postal Service.  He can be reached at Mij455@gmail.com.]