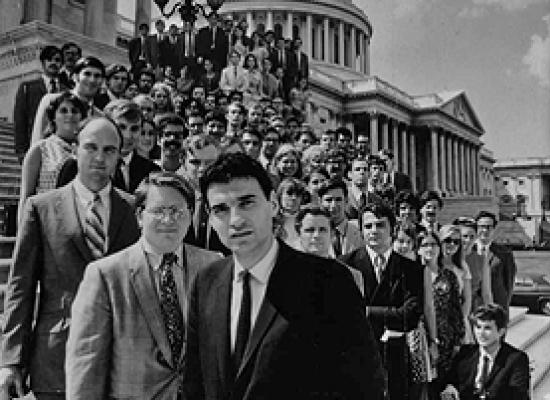 Remember Nader's Raiders, the group of young activists who went to Washington in the 60s and 70s (and beyond) to work with Ralph Nader in his fight for consumer protection, a clean environment, and accountable government?  Among the hundreds of publications that came out of Nader's Center for Responsive Law are two of the best books written about the post office and the struggle between those who would privatize it and those fighting to maintain it as a public institution.

The first was The Postal Precipice: Can the U.S. Postal Service Be Saved? by Kathleen Conkey (1983), and it was followed by Preserving the People's Post Office by Christopher W. Shaw (2006).   These two books are required reading for anyone who wants to understand the push to privatize the post office and why it needs to be resisted.

Nader has been a long-time advocate for the “people’s post office,” and he wrote the prefaces for both books (an excerpt is here).  For years now, Nader has been advocating for the creation of a postal consumer action group that would represent the interests of citizens at the table of postal stakeholders.

This past August, Nader’s Center for Responsive Law entered the postal fray yet again by joining the Advisory Opinion process being conducted by the Postal Regulatory Commission on the USPS plan to close thousands of post offices.  You can see their “interrogatories” posed to the Postal Service, along with the USPS responses, in the PRC docket, here. 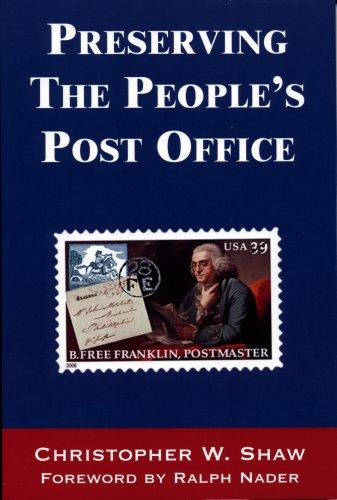 This week Nader wrote a letter to Senator Joseph Lieberman,  Chairman of the Senate’s Homeland Security and Governmental Affairs Committee, and Congressman Darrell Issa, Chairman of the Oversight and Government Reform Committee.  The letter explains how the “crisis” we’re hearing so much about has been totally manufactured and could be easily corrected by Congressional action.  Readers of “Save the Post Office” are familiar with the story, but Nader’s letter does a very good job going over the numbers and explaining the details about how postal workers have overpaid billions of dollars into pension plans and their retiree health care plan.

Nader explains how the Postal Service has overpaid into the Civil Service Retirement System (CSRS) by as much as $75 billion, as well as overpaying into the Federal Employees Retirement System (FERS) by about $6.8 billion (as of FY 2009).  Combined, these overpayments amount to about $82 billion.  If a significant portion of these overpayments were returned to the Postal Service, the crisis would vanish in a flash.

In addition, the 2006 Postal Accountability and Enhancement Act (PAEA) is causing most of the current “crisis” by requiring employees to pay over $5 billion each year into a fund that will pay for future health benefits of retirees of the next 75 years.  “This is something that no other government or private corporation is required to do and is an incredibly unreasonable burden,” writes Nader.

The letter also shows that while the Postal Service is certainly seeing volume declines due to the Internet, the serious revenue hit is due to the recession, and the declines suffered by the Postal Service over the past few years are not at all unusual.  Since they peaked in 2007, USPS revenues have dropped 10%, but during that same time period General Electric, Ford Motor Company, and Exxon Mobil have all seen annual revenue drop by even greater margins (17% to 24%).

The letter points out that if the Postal Service is right about its estimate that $200 million would be saved by closing all 3,652 post offices on its list, that would only be 2% of the $10 billion loss estimated for 2011.  “What is the sense,” Nader asks, “in closing such a large number of post offices and cutting back on the service and the sense of community to millions of U.S. citizens in exchange for such a pittance of cost savings?”

In the Senate, postal matters are handled by the Senate committee on Homeland Security, so Nader’s letter also makes another important point: “Remember, too, that especially during times of natural disasters and national security concerns, there are people who rely on the USPS for critical emergency supplies and medicine.  Cutting services further could impair these citizens' ability to gain access to these necessary provisions at times of peril.”  (For more on that topic, see the study commissioned by the PRC on “The Contribution of the Postal Service in National Emergencies,” and this blog post about it.)

The letter concludes by urging Congress to refund the $82 billion in overpayments to the pension systems and to repeal the law requiring the Postal Service to prefund its retiree health benefits at such an accelerated schedule.  “This would ensure that the USPS returns to solid financial footing and do so in a way that prevents more post offices from being closed, more jobs from being cut, and the quality of service from deteriorating further," Nader concludes.  "Such an outcome would be favorable to the people in this country that rely on the post office to bind their community together, to do their business, to receive precious communication from a distant friend or relative, to pay their bills, or to receive their medicine, among many other things.  Otherwise, those who are most vulnerable in our society will feel the harshest effects of further post office closings and service cuts.”

A copy of Nader’s letter is here, and a more user-friendly version with links is here; the press release is here.