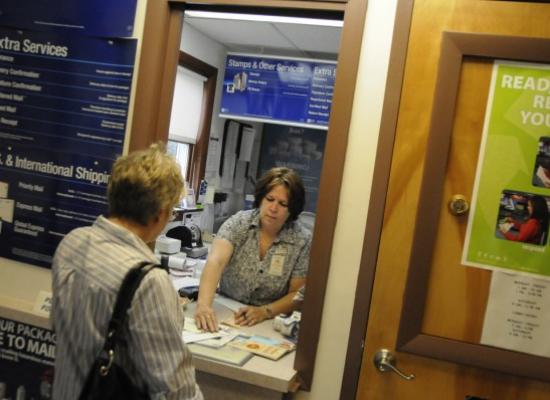 The Postal Service does not give out much information about the revenues post offices bring in, but it has provided enough data to enable one to make estimates.  So we’ve done a little figuring and made a table with estimated revenues for FY 2011 for all 17,700 post offices on the POStPlan list.

You can view a spreadsheet here (good for an overview) or a Fusion table here (good for a map view, charts, and other analytic tools).  You can go straight to a map here.  The easiest way to find the revenue estimate for a particular post office is probably to use the Fusion table: Click on Options > Filter, and select Office Name or Zip > Starts with, and type in the name of the office (in ALL CAPS) or the zip code (3 digit, 5, or whatever).  [Google Fusion Tables (with the maps) was shut down on Dec. 3, 2019. A Carto map is here.]

Keep in mind that these revenue numbers are strictly estimates, based on a methodology described below.  They’re mostly useful for getting the big picture; the number for any given post office could be significantly off.

The Postal Service prefers not to provide revenue data for its post offices.  About the only time one learns anything about how much revenue a particular post office takes in is when the Postal Service decides to close it.  A Final Determination always contains a cost-savings analysis that includes a few details about the revenues, including the total revenues for the past three years — usually cited to show they’re declining.  (The Postal Service never mentions that the recession may have had something to do with the decline.)

Last year, when the Postal Regulatory Commission (PRC) was doing its Advisory Opinion on the Retail Access Optimization Initiative (RAOI) — the plan to close 3,700 post offices — the Commission requested a spreadsheet showing walk-in revenue data for all USPS retail facilities.  The Postal Service submitted the material as a “non-public” library reference, meaning that only selected participants in the Advisory Opinion process could see it. 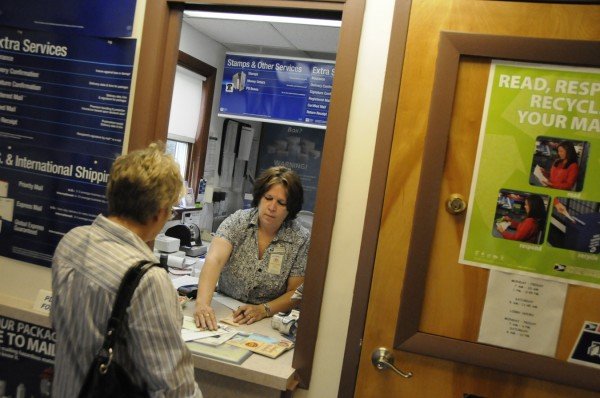 A couple of weeks ago, as part of its PRC testimony on POStPlan, the Postal Service submitted a large spreadsheet entitled “Summary” that contains data about the operations of each post office on the POStPlan list.  It has calculations for retail workload, administrative workload, and so on, for all 17,700 post offices impacted by POStPlan.  (You can download the spreadsheet from the PRC website here.  An abridged version with just the financial data is on Google Docs, here.)

The Postal Service also provided a second spreadsheet for Average Annual Retail Revenue for POStPlan offices for FY2011.  This one just has a few numbers.  It’s grouped by EAS level, and it breaks out total walk-in revenue averages for each level by categories — stamp sales, meter revenue, p.o. box fees, etc.

By combining the information in the two spreadsheets, one can come up with a rough estimate for the revenues at each post office.  Here’s how:

The Summary spreadsheet has a column for “Annual Earned Retail Window Workload.”  It represents how much retail work the postmaster has done.  It corresponds — roughly — to retail revenues.  The correlation isn’t exact because, for example, one post office might sell a lot of stamps one by one, whereas another post office might sell the same number of stamps in books, requiring just a few transactions.  Same revenue, different workload.  Still, the “earned retail workload” number can provide the basis for estimating revenues.

Using the Summary spreadsheet, compute the average “earned retail workload” for each EAS level, and divide each of those numbers into the average annual revenue for the corresponding level, as provided on the second spreadsheet.  You’ll come up with a number for each level that we’ll call the “estimate coefficient.”  Multiply the coefficient by the actual earned retail workload for a particular post office, as provided on the Summary spreadsheet, and you get an estimate for its annual revenue.

While the revenue number for a given post office could be way off, this methodology has at least one thing to recommend it:  When you add up the revenue numbers for all 17,700 post offices, it comes to the exact total the Postal Service provides in the Average Annual Retail Revenue table — $1,347,593,920 — and the numbers also add up correctly for each EAS group.  This would suggest they are fairly decent estimates.

That is tentatively confirmed by the following table.  It contains revenue numbers for 2008 – 2010 drawn from Final Determination notices issued for a few post offices randomly selected from the PRC website, where there’s an archive of dockets on appeals cases.  The 2008 – 2010 numbers are thus actual; the 2011 column comes from our estimates.  As you can see, the estimates look like they’re in the ballpark.

The revenue estimates make it possible to look at an area of the country and compare revenues for post offices in the vicinity of each other (just click on a marker).

Using the POStPlan revenue estimates, one can also do a variety of calculations.  For example, here are average revenues grouped by area.  As this table shows (and as one might expect), the post offices in the Northeast  tend to be more profitable, while those in the South and West — more rural areas — bring in less.

It’s important to note that the Postal Service is not using annual revenues to classify post offices under POStPlan.  Instead, it’s using “earned workload hours,” a calculation that represents a combined value for not only retail activity at the window but also mail distribution, PO Box delivery, and other work the postmaster does.  The hours of operation for downgraded post offices correspond to the combined earned workload, not revenues.

For those being upgraded to Level 18, the rationale is the same — earned workload — and not the additional responsibilities a postmaster might need to assume if his or her post office becomes an Administrative Post Office (APO) overseeing a Remotely Managed Post Office (RMPO).

It’s still interesting, however, to look at the revenue estimates in the context of how post offices are being reclassified.  For example, it would appear that:

The Postal Service would probably explain these anomalies by noting that it’s classifying post offices not based on rough estimates of their revenues but on the more nuanced calculation of total earned workload.

But since the whole plan is being motivated by the claim that small post offices are money losers, it would help to understand why some offices that seem to be making a considerable amount of money are being downgraded, while others that make less are being upgraded.  There are probably a lot of postmasters asking that very question.

Not that an upgrade is anything to write home about.  Postmasters being upgraded will get a 2 percent raise or be brought up to a minimum level 18 salary.  Most already earn more than the minimum, so it’s a small percent raise, and potentially a lot more work — managing part-time workers at an office in another town, filling in when they don’t show up for work, and dealing with many other headaches that the new system will cause.

Upgrades and downgrades that make little sense, cutting the hours at post offices that are practically breaking even, thinking 13,000 part-time workers can be “remotely managed.”  The whole plan is pretty crazy, and very depressing for those who care about small rural post offices.  As one postmaster wrote in, “I just can’t see how anybody would run a business this way.  It wouldn’t last long, that’s for sure.”