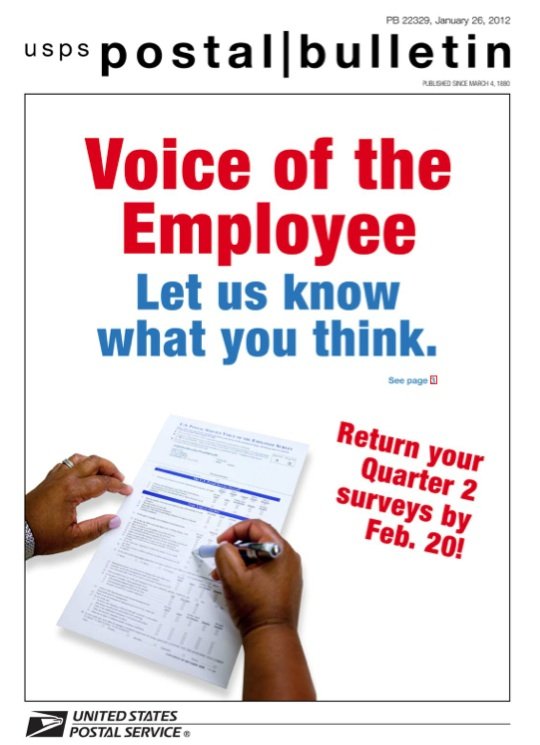 The results of the Voice of the Employee (VOE) survey for FY 2011 were made public this week, and there’s some bad news for postal headquarters.  Two-thirds of the employees responding to the survey could not say they trusted senior management to ensure the success of the Postal Service.  That’s a loud vote of “no confidence,” and it’s probably just the tip of the iceberg.

The Postal Service conducts the VOE, as the cover story for the most recent issue of Postal Bulletin explains, as a “measure of employee engagement” —  “the extent to which people enjoy and believe in what they do, and feel valued for doing it.”  The 2011 survey had 35 questions about things like diversity, communication, and safety.

The question about trusting management was worded like this: “I am confident in the ability of senior management to make the decisions necessary to ensure the future success of the Postal Service.”

The responses were overwhelmingly negative.  Only 32% of employees said they had a “favorable” view of senior management’s ability, while 47% had an unfavorable opinion.  Some 22% were neutral on the question, which isn’t much of an endorsement either.

This means nearly half of those surveyed have little or no confidence that senior management knows what the hell it’s doing, and fewer than a third are confident that management can get the job done.  Think maybe workplace morale is down?

The survey is voluntary, so one can only speculate about what the results would have been if every employee had participated.  Many of the most disillusioned workers probably just tossed the thing in the trash.  Plus, many of those surveyed replied early in FY 2011, before the plans to close up to 3,652 post offices and 250 plants were announced.  (It’s not been possible to locate the results of surveys in years past, so we don’t whether this unfavorable rating represents a significant departure from previous surveys.  That question may also be a new one on the survey, since some earlier versions don’t include it.)

The Postal Service surveys 25% of the workforce at a time, and about half reply, so in the first quarter of FY 2011, for example, 76,000 employees — 54 percent of those surveyed — responded, and in the last quarter of 2011, 71,000 replied.  A copy of the survey is available here, the results for FY 2011 are here, and the original Excel document with the results can be downloaded here.

While results of the survey in years past are not readily available online, the Postal Service does publish what it calls the “performance indicator.”   This index is calculated by averaging employee responses to eight key questions on the survey:

Historically, there have been many issues and controversies with the survey.  In 2005, for example, there were allegations that postal workers who elected not to complete the survey were called to a supervisor’s office where they were verbally asked questions similar to those asked on the VOE Survey.  At around the same time, the APWU called for a boycott of the VOE because it believed postal management used selective responses to justify regressive contract proposals.  In 2009, the National League of Postmasters voted not to support it because of the deteriorating working condition of postmasters.

The Postal Service likes to boast about the fact that it conducts the VOE survey, it uses the covers of Postal Bulletin to encourage employees to respond, it rewards managers for a high response rate, and it apparently thinks that its 63% approval rating is pretty good.  It will be interesting to see what HQ has to say about its dismal rating on the Trust Senior Management question.