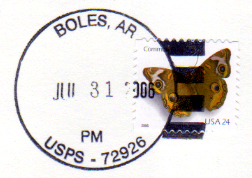 If you’ve been reading the news accounts of town meetings with USPS representatives that are held when they’re considering a post office for closure, you’ve heard this one before.  The citizens at the hearing just didn’t feel the representatives of the Postal Service were really listening.  It’s like the decision was already made.  Turns out that wasn’t just a feeling.

The Postal Service has been studying the closure of three Arkanasas post offices, in Boles, Ozan and Parks, all located in the congressional district of Representative Mike Ross.  On June 14, the Postal Service held public meetings, as required by law, to hear from local citizens.  As the Times Record reported the next day, “Despite complaints from some present that the closing was inevitable and the meeting a mere formality, [Postal Service representative Jackie M.] Stubitsch said no final decision has been made. She said the fate of the post office will be made public in about nine months.”

But just over a week later, Ross received letters dated June 21 stating that a final determination had been made to close the post offices.  And then three days after that, Ross’s office received emails from the Postal Service saying the letters were sent erroneously and were being retracted.
Ross suspects the letters were boilerplate written before the public hearings had even been held, and he has sent a letter to Postmaster General Patrick Donahoe requesting “a full accounting of the U.S. Postal Service’s review process for closing post offices.” Ross wants to know if the public hearings are held “simply to fulfill procedural requirements or if indeed the concerns of citizens are truly considered.” The whole story, including Ross’s letter, is in The City Wire here.

This is not the first time the Postal Service has been accused of deciding on a closing before hearing from the public.  An Advisory Opinion issued by the Postal Regulatory Commission in 2009 said that public comments are “often are not sought until after the initial decision to close the facility has already been made.”

So the next time you read a news article and a citizen is quoted as saying that the Postal Service representative didn’t seem to be listening, you’ll know why.  The decision to close the post office has already been made, and the letter of a final determination has already been written.  It might even be in the mail.