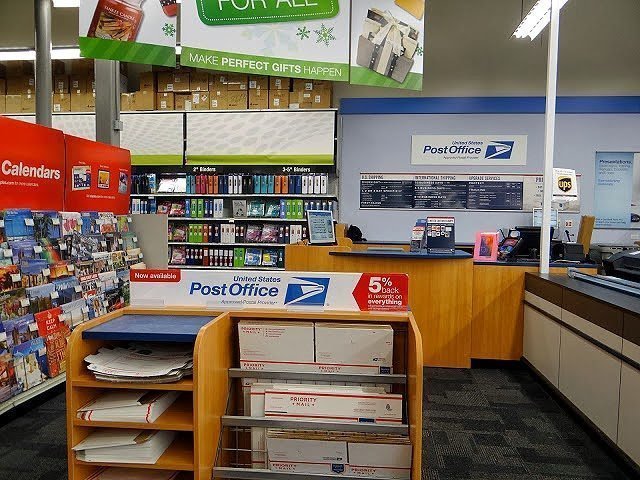 It’s been clear for a long time that the Postal Service is in the process of privatizing itself by shifting processing operations to companies like Pitney Bowes through the workshare system and contracting out billions of dollars of work to private corporations (over $12 billion in 2014).  The Postal Service has also been working to privatize its retail operations by creating a vast network of alternative retail channels.

This transformation of the retail system is the subject of a revealing and recently unearthed PowerPoint presentation entitled “Retail Channel Strategy.”  The presentation was prepared as a “discussion document” for the Postal Service by McKinsey & Company back in March 2012.  It’s about how the Postal Service could save billions a year by shifting its retail business from low-traffic post offices to alternatives like private retailers, self-service kiosks, and digital platforms.

The presentation is dated a month after the Postal Service published its five-year plan, “Plan to Profitability,” which was prepared by several other consulting firms, based on previous work by McKinsey (as discussed in this previous post).  The five-year plan indicated that the Postal Service would save $2 billion a year thanks to changes in its retail operations, but it provided no details about how that could happen.

The McKinsey presentation explains how.  It shows that putting postal counters in 1,500 Staples stores is just the beginning.  The ultimate goal is to create 12,000 to 22,000 new retail partner outlets by 2020 and thereby cut business at USPS post offices in half.

The leaders of the Postal Service have consistently denied that they are interested in privatization, but what else do you call it when the goal is to drive customers from post offices to private retailers?

According to the McKinsey presentation, traditional post offices are not a cost-efficient way to bring in revenue.  The Postal Service, it says, would demonstrate “financial stewardship by optimizing the network to migrate customers to the lowest-cost channels,” i.e., private retailers, automated kiosks, and online sources like USPS.com and Stamps.com.

The presentation says it costs 47 cents to bring in a dollar at a post office, while it costs 20 cents at a postal counter in a private retailer, 15 cents at a contract postal unit, 8 cents at a kiosk, and 2 cents at USPS.com.  By shifting over to these less expensive channels and introducing other changes, says the presentation, the Postal Service could save $2.6 billion a year by 2020.

This goal would be accomplished primarily by creating 12,000 to 22,000 new retail partner outlets.  The presentation describes “multiple options” for these new partnerships.

One format is called “store-in-store.”  That’s when there’s a “postal outlet located in a dedicated space at a partner retailer, operated by a dedicated staff (employed by the partner), offering a full set of postal products and services.”  This is the model that was initially used for the Staples initiative.

A second type of retail partnership is called “over the counter.”  That’s when USPS products and services are “sold through existing retailer space (retail till or customer service desk) leveraging existing retailer staff (not dedicated to USPS activities).”  This sounds a lot like the Approved Shipper Program adapted to big box retailers, which is essentially what the Staples counters turned into when the program expanded after the pilot phase.

The presentation indicates that at the beginning of fiscal year 2013 (October 2012) the Postal Service planned to launch pilots with four to six retail partners, involving 150 outlets, in order to demonstrate these formats.  It then planned to expand to 2,000 outlets by the third quarter of 2013.

As it happened, the Postal Service did almost that, but it took a little longer and involved fewer partners.  The Staples pilot began in November 2013 with dedicated postal counters in 82 stores, and then in October 2014 it expanded to 1,500 stores under a variation of the Approved Shipper Program (which allows the counters to sell non-USPS products).

The presentation also mentions a couple of other retail partnership formats, both of which use automated machines.

One involves CPGs — Consumer Packaged Goods — which include frequently replaced consumables like food and beverages, apparel, and cleaning products (in contrast to things like cars and furniture).  The presentation envisions an automated system for handling these consumer goods right off the retailer’s shelf through a point-of-service machine using barcode scanning.

Along similar lines, the self-service kiosks now found in post offices would be placed in private retail businesses, where they would be owned by the retailer or rented from the Postal Service.  Thus far, we haven’t seen such kiosks in a private business, but maybe we’ll be seeing them soon in Walmarts or other big box store.

The presentation sets out another goal — “continue to rationalize and simplify the product (e.g., flat rate) to enable self service, retail partnerships and digital access growth while providing a simpler experience to the customer.”

So there’s an interesting rationale for Flat Rate Boxes.  When they were introduced in 2009, it was all about saving the customer money and making sending packages more convenient.  Who knew it was also about making it easier to migrate customers to kiosks and private retailers?

Just in case customers are not quite ready to shift their business from a post office to a kiosk or private partner, the presentation also recommends a marketing push to “drive customer adoption of self service, migration to retail partners and use of digital access channels.”

When the five-year plan and the McKinsey presentation were being shared back in early 2012, there was a moratorium on closing post offices.  The Postmaster General had embarked on a plan to close as many as half the country’s 32,000 post offices, and communities were protesting to Congress.

Closures nonetheless figure prominently in the cost savings breakdown in the presentation.  One of the main reasons for expanding alternative access, after all, is to permit closures.  As one slide in the presentation notes, “conduct PO studies as volume migrates.”

The presentation mentions conducting discontinuance studies “where appropriate,” but it does not indicate a specific number of closings.  It does, however, anticipate that closing post offices would save $100 million by 2015 and $200 million by 2020.

That translates into several thousand closures.  The Retail Access Optimization Initiative (RAOI) of 2011, which involved closing 3,700 post offices (mostly small rural offices, but hundreds of larger offices as well), also anticipated a savings of $200 million.  The presentation thus envisions closing about 4,000 post offices from 2012 to 2020 — about 500 a year.

As it turns out, due to all the protests, the Postal Service has closed hardly any post offices over the past three years.   That doesn’t mean, though, that plans aren’t in the works to resume mass closures sometime in the future, perhaps when there’s less resistance in Congress.

The presentation isn’t about getting rid of post offices completely.  As noted in one slide, thousands of small rural offices would need to be maintained in order to fulfill the Postal Service’s Universal Service Obligation.

In order to deal with that burden, the presentation refers to POStPlan, the initiative to reduce hours at 13,000 post offices and replace their postmasters with low-paid part-time workers.  POStPlan was announced to the public in May 2012, a couple of months after the date on the presentation.  It was supposed to save $500 million a year, but now that union workers are staffing many of these offices, that estimate will need to be revised.

The presentation also recommends improving retail services at 2,500 “high traffic outlets.”  This goal was realized in May 2013, when the Postal Service announced its Premier Post Office program, in which 3,100 post offices were selected for preferential treatment, like early access to high-profile stamp releases, special training for personnel, and new equipment.  The presentation indicates that the Postal Service would spend $100 million in startup costs for this program.

The expenses for implementing the retail channels vision go far beyond that, however.  The presentation also budgets $127 million for “marketing awareness” to encourage customer migration to private retailers —  $10,000 per retail partner.  The startup expenses for the entire plan add up to $345 million.

Overall, the 2012 presentation pretty much lays out what the Postal Service has done over the past three years and gives some indication of where things are headed — more partnerships like the Staples deal, self-service kiosks in non-USPS locations, a marketing push to encourage customers to use alternative channels, and so on.

The presentation doesn’t look beyond 2020, but the strategy it charts out shows that the Postal Service is not very interested in preserving post offices.  Rather than reinvigorating its legacy of brick-and-mortar facilities with initiatives like postal banking, the Postal Service is looking to make the post office obsolete.  And it’s not just about increasing customer convenience.  It’s about the bottom line.