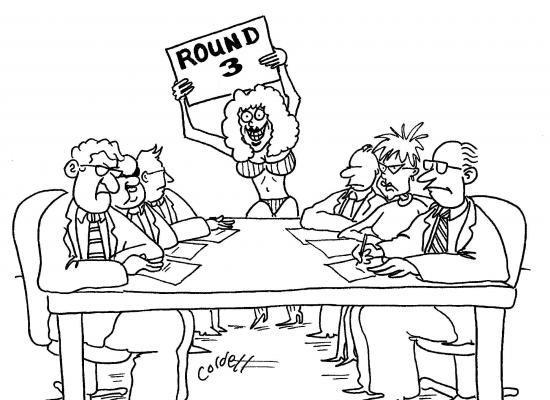 Yesterday the Postal Service filed a brief with the U.S. Court of Appeals, District of Columbia, arguing that the Postal Regulatory Commission was wrong in its most recent ruling on the exigent rate increase.

The Postal Service wants the case remanded to the Commission for further review so that it can renew its arguments for an extension of the 4.3 percent surcharge, which otherwise will come to an end sometime this spring, probably in April.

Yesterday’s brief does not specify how much more money the Postal Service believes it is entitled to recoup from the surcharge, but back in June the Postal Service offered a couple of scenarios for recalculating lost revenue due to the recession.

The main issue at stake at this point in the proceedings is the Postal Service’s “ability to adjust” to lower volumes.  In yesterday’s brief, the Postal Service argues that the Commission has taken positions on this issue that are “illogical,” “absurd,” “hopelessly inconsistent,” “self-contradictory,” and ultimately “arbitrary and capricious” — the legal grounds for remand.

The Commission has issued four orders on the exigent rate increase, and this is the third time the Postal Service has turned to the Court of Appeals to fight a ruling.  Along with yesterday’s brief, the Postal Service filed an appendix containing all of the rulings, briefs, and comments filed on the case.  It runs to over 600 pages.

The Postal Service first filed a request for an increase in 2010.  The Commission’s first order (No. 547, September 2010) denied this request on the grounds that that the Postal Service had failed “to quantify the impact of the recession on postal finances, address how the requested rate increases relate to the recession’s impact on postal volumes, or identify how the requested rates resolve the crisis at hand.”

In response, the Postal Service petitioned the Court of Appeals, which remanded the case back to the Commission “to fill the statutory gap by determining how closely the amount of the adjustments must match the amount of the revenue lost as a result of the exigent circumstances.”

The Commission’s second order (No. 864, September 2011) clarified the meaning of losses “due to” the recession and directed the Postal Service to “quantify the net adverse financial impact of the exigent circumstances.”

That order went unchallenged and nothing much happened for a couple of years (aside from the mailers lobbying the Postmaster General not to renew the request), but then in September 2013, the Postal Service filed a new request for a permanent 4.3% increase.

The Commission’s third order (No. 1926, December 2013) granted the increase of 4.3 percent, but it put a limit on how much the Postal Service could collect — $2.8 billion in additional contribution, which takes about 18 months to make.  The increase went into effect in January 2014, and it was set to expire sometime in August 2015.

In September 2015 the Postal Service returned to the Court of Appeals for a third time, and yesterday it filed its initial brief in the case.  If the Postal Service’s appeal is not successful, the surcharge will end sometime this coming spring.  If the Court remands the issue back to the Commission, the increase may be extended yet again.

The Commission has adopted a four-factor test for determining when the “new normal” arrives.  It is that point in time when “all or most” of the following occur:

(1) the disruption to a sufficient number of relevant macroeconomic indicators demonstrates a return to near historic positive trends;

(2) application of the macroeconomic variables accurately project change, and the rate of change on Postal Service mail volumes is positive;

(3) the Postal Service regains its ability to predict or project mail volumes following an extraordinary or exceptional event; and

(4) the Postal Service demonstrates an ability to adjust operations to the lower volumes.

The fourth factor has become the bone of contention, and it is the main theme in yesterday’s brief.  The phrase “ability to adjust” appears 56 times in the 47-page brief.

The Postal Service says it is illogical for the Commission to expect that the infrastructure could adjust to the recession-caused volume losses in a given class of mail exactly at the point when the recession stopped causing volume to fall.  It doesn’t make sense for Standard Mail to have one “new normal” date and First Class to have another. The Postal Service puts it this way:

After all, the principal types of “adjustments” available to the Postal Service to shed costs – such as reducing work hours, consolidating processing and delivery operations, and reforming compensation and benefits – are system-wide responses. They do not depend on the precise class of mail that has been lost, nor can they be targeted to address a particular class of lost volume. First-Class Mail, Standard Mail, and Periodicals are all processed, transported and delivered by the same employees over the same networks. The Postal Service could not adjust its networks specifically for Standard Mail losses in one year but make First-Class-Mail-specific adjustments in another year.

The Postal Service also argues that due to the nature of its operations, obligations, and infrastructure, it takes time to adjust to lower volumes — much more time than the Commission is acknowledging.

A second main point in the Postal Service’s brief is that the Commission has been “hopelessly inconsistent” in the way it has dated the “new normal.”

In its 2013 order, the Commission said the new normal had arrived at different times for different classes of mail, ranging from the beginning of FY 2010 to the beginning of FY 2012.  According to the Postal Service, the Commission says something entirely different in its FY 2013 Financial Analysis report, which states that the Postal Service “did not effectively offset the losses in its attributable costs, let alone institutional costs, before FY2013.”

The Postal Service argues that the earlier dates were selected arbitrarily by the Commission, and in some cases significantly so.  This is crucial because if the “new normal” comes a year or two later, the losses from one year count again the following year, and that adds up to a lot more lost contribution due to the recession.

In comments filed with the PRC in June 2015, the Postal Service presented a couple of scenarios showing how other dates for when the “new normal” began affected the calculations for lost contribution. They give some indication of what the Postal Service will seek if it succeeds in getting the Court to remand the case.

The Postal Service concludes its brief with this comment:

It is beyond dispute that the Great Recession caused volume to drop to a level that appears to be permanently lower than its pre-recession level. That lower level of volume deprived the Postal Service of its ability to cover its institutional costs, which are largely outside the Postal Service’s control and do not fall along with declining volume. That does not mean that the Postal Service is entitled to a permanent infusion of revenue to cover such costs, of course, but it does mean that the Commission must analyze the relevant evidence and offer a cogent explanation for the endpoint it has chosen, particularly where reasonable alternatives were proposed….  It has not done so, and accordingly the case must be remanded for further proceedings.

The Commission has until February 3 to respond.  The response of the intervenors — Valpak, the Alliance of Nonprofit Mailers, the Association for Postal Commerce, the Association of Magazine Media, and the National Postal Policy Council — is due on February 10.  Reply briefs will follow.  Perhaps the Court will render a decision in time for the Commission to act — if it becomes necessary to do so — before the exigent surcharge ends in the spring.

(There’s more on the exigent increase in these previous posts.)