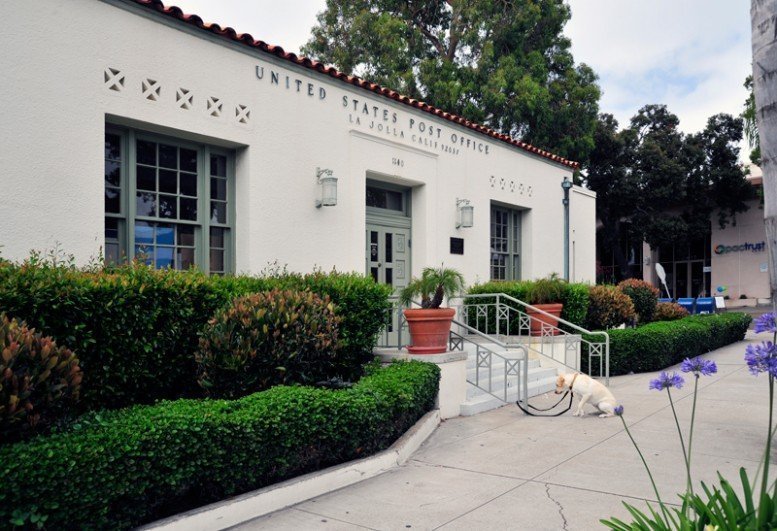 The Postal Service has issued a Final Determination to relocate retail services in La Jolla, California, thus paving the way for the eventual sale of the historic New Deal post office.  Tom Samra, Vice President, Facilities, was responsible for reviewing the appeals, and not unexpectedly, he came to the same decision that he made regarding the relocation of the Bronx GPO: the objections to the relocation “do not outweigh the financial exigencies facing the Postal Service.”  (Mr. Samra’s Final Determination is here.)

Leslie Davis, chair of a task force trying to stop the sale of the landmark post office, did not mince words about her view of the Postal Service’s decision.  “The USPS has behaved like an arrogant bully,” she said.  “They have been dismissive, aloof, secretive and cocky. The resources of time and money they’ve spent on their misinformation campaign regarding their finances have succeeded, and ‘the people’ never stood a chance.  Realtors at CBRE will continue the sell-off of these real estate assets that once belonged to all Americans but somehow were handed over in a silent act of greed.”

One might think that with such important people and organizations opposing the relocation decision so vehemently, the Postal Service could look for other ways to save a few dollars and bring in some revenue, but postal management will not change course, no matter what.

Several of the appeals pointed to the Postal Service’s failure to follow federal statutes and regulations regarding the disposal of historic properties.  That’s been the case with most of the other historic post offices that have been closed, relocated, and sold, but the Postal Service has continuously maintained that it is following the law.   That claim, dubious as it is, can only be challenged in federal court.

The appeal letters also pointed to the adverse economic impacts the relocation will have on La Jolla.  In response, Mr. Samra says that the Postal Service’s “exigent financial circumstances force us to pursue every opportunity to reduce costs and generate revenue.”

These approaches to increasing revenues involve billions of dollars, and they dwarf the millions that selling post offices brings in.  But raising rates would displease the Postal Service’s biggest customers, and that’s the last thing postal management wants to do.

In any case, the Postal Service is selling post offices not to save money or to generate income.  The leaders of the Postal Service have another agenda.  They want out of the retail postal business.  That’s because over 80 percent of total mail volume is “wholesale” — it enters the system workshared, presorted and at discount rates.  The big mailers don’t need post offices, and they, along with postal management, believe that maintaining an infrastructure of brick-and-mortar post offices just drives up postal rates and cuts into their profits.

As Mr. Samra notes in his final decision, nearly 40 percent of retail revenue comes from sources other than post offices.  The Postal Service has been working hard to increase that percentage.  It has run ad campaigns encouraging people not to go to the post office, it has reduced operating hours at 13,000 small post offices, and it has cut back on the number of clerks serving customers at the window.  The leaders of the Postal Servic see post offices as as a burden to be disposed of, rather than a legacy to be preserved.

Mr. Samra’s decision on the La Jolla post office comes as no surprise, but it is still disappointing.  As we have seen time and again — Venice, Ukiah, Northfield, Santa Monica, the Bronx, and on and on — the leaders of the Postal Service refuse to be dissuaded from their belief that bringing in a few million dollars by selling historic post offices is more important than the value of these landmarks to their communities.  The process of dismantling the infrastructure and privatizing assets thus continues, and there doesn’t seem to be anyone or anything that can stop it.