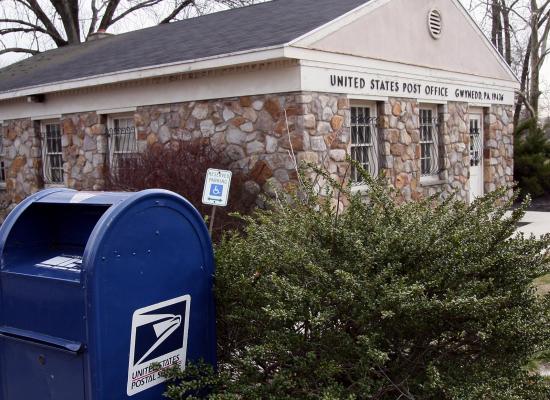 It was a bad day for the post office.  On Tuesday (Aug. 30), the Postal Regulatory Commission denied an appeal to save the post office in Gwynedd, Pennsylvania.  If ever there were a post office that deserved a second chance, this was it, and the PRC’s ruling is very disappointing.

Until it closed in May, Gwynedd had had a post office since 1810, when it was one of only 35 in the state.  The post office was located on the grounds of Gwynedd Friends Meeting, a Quaker community, since 1914, and it was housed in a beautiful stone building on picturesque property owned by Foulkeways, a thriving Quaker retirement community, many of whose residents depended on being able to walk to the post office.  The community came out strong behind keeping the post office open, and the projected savings for the Postal Service were minimal, if anything.  There really was no reason to close the post office in the first place.

The community was fortunate to have a professional writer willing to put in the time to write the appeal documents.  Her argument is clear, persuasive, thorough, well researched, and passionate.  As hundreds and thousands of post offices close over the coming months and years, it’s not likely that many appeals will be prepared in a more professional manner.

The Postal Service did a poor job with the closing process, beginning to end.  There’s evidence, for example, that when it held the public hearing, it had already made the decision to close the post office.  People felt that way at the meeting, and then only three days later, the decision to close was forwarded to Headquarters.  It turns out that a couple of weeks before the meeting even took place a union postal worker had been contacted by management seeking permission to contract out the work of removing the boxes from the post office.

The appeal observed that the solicitation of public input at the meeting was just “a sham to present the appearance of conforming to required procedure.” The Public Representative (a kind of public defender appointed by the PRC to represent the interests of the general public) concurred: “This sequence of events is consistent with and supportive of a conclusion that the discontinuance procedures were, at best, ‘window dressing.’  Consideration of these facts leaves the impression that public participation in this case was less than meaningful.”

The appeal argued not simply that the Postal Service had conducted the meeting in bad faith.  It went through nearly every point made to justify the closing and showed how each was seriously flawed.

Even with this decline in revenue, the post office was apparently operating in the black, and the supposed savings the Postal Service would achieve by closing it were, according to the appeal, probably inflated.  In fact, the appeal suggested that the Postal Service might ultimately lose money by closing the post office rather than waiting for the construction on the road was competed, when business was likely to improve.

A look at the numbers seems to substantiate the claims of the appeal.  It’s not easy to say for sure because the Postal Service blacked out page after page of its documents containing revenue information.  The Postal Service considers such information “proprietary.”

Yet somehow the Postal Service figured that without having to pay the rent and the clerk’s salary, it could save $30,000 a year, even though it acknowledged that the clerk was being transferred to another facility and not being laid off.  So how the Postal Service came up with cost savings of $30,000 is really a mystery.

The appeal also faulted the Postal Service for presenting an inaccurate record of the public hearing and for refusing to turn over its minutes to the meeting.  The Postal Service argued that getting in and out of the Gwynedd location would be permanently hampered and that the alternate location in Spring House shopping center was superior.  Residents, however, said that the Gwynedd location would be fine when construction ended, and the other location had numerous problems, including a dangerous left turn and bad parking.

The appeal also criticized the Postal Service for the way it changed its rationale for closure, arguing at first that the post office would be permanently cut off from the road by the new highway configuration, then by pointing to the decline in business, and then by bringing up an issue with the lease; it also changed the amount of money it would save, from $50,000 to $34,000.  The Postal Service seems to have decided to close the post office, and then looked for reasons to do so, and it seems to have made them up on the fly.

On its behalf, the Postal Service began the case for closure by observing that because the Gwynedd post office was just a branch and not a main post office, it was not entitled to a full closure procedure.  (That’s part of a long-standing feud between the Postal Service and the PRC over whether stations and branches are “post offices.”)

Nonetheless, the Postal Service said it had done what it was required to in terms of procedures.  It had provided adequate notice, held a meeting, and considered the pertinent criteria — the effect on postal services, the community, and employees, along with the economic savings gained from the closing.  The Postal Service said it would continue to provide effective regular service through carrier service and postal services at several nearby locations, including another post office as well as a Whole Foods Market, a Staples store, a Wells Fargo Bank, and a Genuardi Supermarket

The PRC is not in a position to decide that a post office should remain open.  It can only remand the decision back to the Postal Service, and it can do so only if the PRC finds the Postal Service’s decision to be “(A) arbitrary, capricious, an abuse of discretion, or otherwise not in accordance with the law; (B) without observance of procedure required by law; or (C) unsupported by substantial evidence on the record.”

The appeal addressed all of these criteria, and in some respects, the PRC agreed with the appellant’s arguments.  For example, concerning the public hearing, the PRC said, “The record suggests that . . . that the Postal Service rushed to judgment on this matter without fully considering views expressed at the public meeting.  The Postal Service does itself no favors when it leaves the impression that public participation is not meaningful. . . .  The process must be honored.  If an office is being studied for possible discontinuance its closure cannot be deemed a fait accompli.”

The PRC also faulted the Postal Service for failing to using questionnaires to obtain the views of Gwynedd customers, for inadequately responding to residents’ concerns about the alternate location, and for not adequately explaining how its cost-saving estimates could include employee compensation expenses that would not be eliminated by the closure.

Nonetheless, the Commission decided in favor of the Postal Service primarily because it had at least done a minimal job following appropriate procedures and because “the record indicates that the Postal Service will continue to provide effective and regular service to customers served by Gwynedd station.”

The Gwynedd post office, which had closed on May 27, will thus remain closed permanently — after serving the people of the community for over 200 years.

In reviewing the docket, what strikes one is how limited the scope of the legal debate was.  The appeal carefully avoided getting into what it called “sentimental attachment” to a “familiar community institution,” and instead stuck to issues of “sound business sense.”  The appeal thus spoke to the Postal Service and the PRC in their own language, using their own criteria and modes of legal reasoning.  It all came down to issues like whether or not the Postal Service followed the right procedures, how far away the nearest post office is, and how much money might be saved closing the post office.

Though such questions are important, they fail to consider the heart and soul of the matter.   The country needs post offices for reasons that cannot be measured in terms of dollars and miles.  The post office is a democratic institution, and when people enter a post office, they are reminded of their role as American citizens.  Yes, they are there to do some business, but with their government, not with Staples or Wal-Mart.  The existence of a post office should not be about how far are the nearest alternative retail outlets and how much money might be saved in closing it.  A post office is priceless.